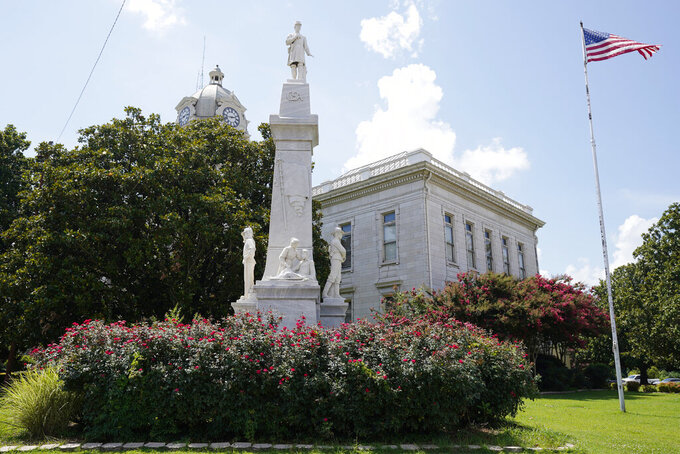 Rogelio V. Solis, ASSOCIATED PRESS
FILE - A war memorial, erected in 1913 by the Varina Jefferson Davis Chapter of the United Daughters of the Confederacy, sits on the lawn of the Leflore County Courthouse, as the county's tribute to the sons and daughters of the Southern Confederacy, on July 14, 2021, in Greenwood, Miss. Supervisors in the Mississippi county have chosen a new site for the Confederate monument after more than a year of discussion, but the site will need state approval and it's unclear how much the move will cost. (AP Photo/Rogelio V. Solis, File)

GREENWOOD, Miss. (AP) — Supervisors in one Mississippi county have chosen a new site for a Confederate monument after more than a year of discussion, but the site will need state approval and it's unclear how much the move will cost.

The stone monument with multiple Confederate soldiers has stood since 1913 outside the Leflore County Courthouse in Greenwood, and it's one of about 50 Confederate monuments on public property in Mississippi. The majority-Black Leflore County supervisors voted in June 2020 to move it to a less prominent spot — a decision made amid international protests over racial injustice after police in Minneapolis killed a Black man, George Floyd.

Supervisors voted Monday to move the monument to Fort Pemberton Memorial Park, the Greenwood Commonwealth reported. That is a Civil War battle site on land now owned by the county, and it is about 3.5 miles (5.5 kilometers) west of the courthouse.

During the Battle of Fort Pemberton in March 1863, the “Star of the West,” a Union boat that had been captured two years earlier by Confederate forces, was sunk in the Tallahatchie River. That blocked the passage of some Union troops who were headed to Vicksburg.

Because of that history, Fort Pemberton “would be a viable area for the monument," said Reginald Moore, president of the Leflore County supervisors.

The board’s next step is to submit its relocation plan to the Mississippi Department of Archives and History. Then the board must do a cost assessment of the relocation with Willis Engineering, the county’s engineering consultant.

Mississippi law says monuments to several wars, including the Civil War, may not be “relocated, removed, disturbed, altered, renamed or rededicated,” but it says a governing body may move a memorial “to a more suitable location if it is determined that the location is more appropriate to displaying the monument.

A Confederate monument at the University of Mississippi was moved in 2020 from a central spot on campus to a secluded one. Supervisors in some counties have voted to move such monuments. In May, Lowndes County started moving one from the courthouse lawn to a cemetery that has graves of Confederate soldiers.

Confederate monuments have been taken down in recent years in other parts of the U.S., including a large statue of Gen. Robert E. Lee that was taken down, cut into pieces and hauled away in early September in Richmond, Virginia.