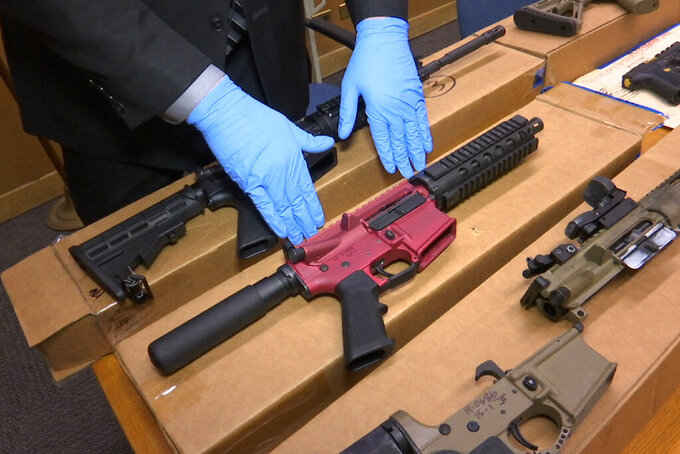 Haven Daley, ASSOCIATED PRESS
FILE - In this file photo taken Wednesday, Nov. 27, 2019, is Sgt. Matthew Elseth with "ghost guns" on display at the headquarters of the San Francisco Police Department in San Francisco. A U.S. judge says she won't block a Nevada law banning the manufacture and possession of so-called "ghost guns" that don't have serial numbers. U.S. District Judge Miranda Du in Reno refused on Monday, July 26, 2021, to issue an injunction preventing enforcement of the law signed in June by Gov. Steve Sisolak. It goes into effect Jan. 1, 2022. The judge says she's not convinced the measure violates Second Amendment gun rights and a Fifth Amendment ban on government seizure of property. (AP Photo/Haven Daley,File)

LAS VEGAS (AP) — A federal judge won't block a Nevada law banning the manufacture and possession of so-called ghost guns that don’t have serial numbers, saying she doubts a lawsuit from gun rights advocates can succeed.

The judge said she wasn’t convinced the measure violated Second Amendment gun rights and a Fifth Amendment ban on government seizure of property. She called the law “a valid exercise of the governments' police power.”

Plaintiffs including the Firearms Policy Coalition called the ruling “misguided" and “horribly flawed” and said they were weighing an appeal, the Las Vegas Review-Journal reported. Though the judge refused to immediately block the law, the lawsuit will still move through the courts for a final ruling.

Attorneys for the coalition did not immediately respond Tuesday to messages from The Associated Press.

The law goes into effect Jan. 1. It prohibits ownership or sale of unfinished gun kits or the manufacture of firearms without identifying marks that allow their owners to be traced.

Supporters of the law cited the public safety threat from people who are legally prohibited from owning and registering firearms but can build guns from kits.

The lawsuit was filed June 10 by the coalition and Nevada residents Roger Palmer and Chad Moxley against state and local officials. It claims plaintiffs have a constitutional right to build their own guns.

The lawsuit calls the law “a broad and unconstitutional ban on constitutionally protected conduct” that raises the specter of “thousands of individuals and countless local businesses” being forced to give up property they own.

The judge said the law doesn’t “severely burden” the Second Amendment right to own guns, merely regulates it, and “does not completely prohibit, as plaintiffs suggest, the right to self-manufacture firearms but rather prohibits self-manufacturing of unserialized firearms.”

“Plaintiffs have not shown a likelihood of success on the merits,” Du said.

The Bureau of Alcohol, Tobacco, Firearms and Explosives in December served a search warrant for a Nevada gun-kit maker, Polymer80 in Dayton, as it investigated whether the company evaded gun laws by making and selling the kits.

According to ATF data, about 10,000 ghost guns were recovered from crime scenes and seizures by law enforcement in 2019, including 2,700 in California alone, the Review-Journal reported.