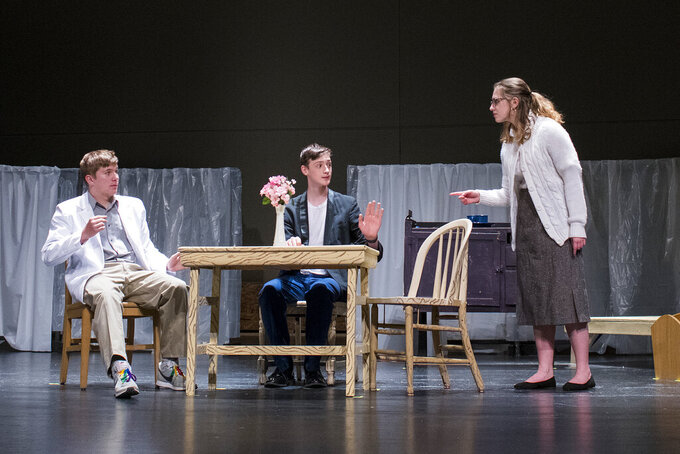 The play tells the story of Mary Mallon, an Irish cook who immigrated to America in the early 1900s while unknowingly serving as a carrier of the disease typhoid. The story begins after Mary has already infected and killed several people with her cooking, but still she refuses to be vaccinated or studied by scientists who offer to help her.

Choosing a play with such a relevant premise was entirely intentional, but director Jeremiah Kolkman isn’t looking to take sides, the Wyoming Tribune Eagle reports.

While the director chose the play for its relevance, the production remains bipartisan. It presents the situation from a variety of different perspectives. Mary and her husband struggle through religious reconciliation, while the two scientists throughout the production face conflict in their field.

“I thought it was appropriate that this play kind of mirrors what we’re probably all going through in some way, shape or form,” Kolkman said. “Whether those who believe it or not, those who are strong against it or not, it takes in both religion and science and mixes those two together.”

The play is somewhat complex for a high school production. Although the dialogue isn’t difficult, it is a largely serious narrative dealing with lofty themes and tormented performances based on historical events, with sparse comedic moments in between.

Kolkman, as well as co-director Audrey Mayfield, are largely satisfied with their students’ performances, even noting that rehearsals have brought on “happy accidents,” where the cast came up with better ways to perform a scene on the fly.

Really, everything the directors do is for their students, they say.

“What we’re doing is all for them,” Kolkman said. “They love to do this. This is an avenue for students to do something else that they haven’t been able to do traditionally in a while.”

The last time Cheyenne Central held a full production was in the fall of 2019. Coming off of doing one-act plays and 10-minute musicals has created a bit of difficulty for the cast members.

Despite some challenges, Whitney Brooks, a senior at Central, is happy with the progress she and the rest of the cast have been making.

“I think we’ve all missed it so much that (performing) is just really nice. We’re all super excited to get back into it again,” Brooks said.

Being able to do a full production allows for the cast to better explore their respective characters and tell a more complex story. “Typhoid Mary” is a play with little action, and features just a six-person cast, giving each actor plenty of room to work with their performances.

Brooks has been cast in every production since she was a freshman, and was playing the main character in productions as early as her sophomore year. This time around, she’s having to work with a character that presents a unique challenge.

The strong point of the production for Brooks has been its intimacy. The opportunity to present its character-driven performances helps her form bonds with her other cast members in a relatively low-stress environment.

Julia Steele, a senior and veteran of Central’s theater program, echoes a similar satisfaction with making human connections with not only her cast mates, but the audience, as well.

“With a big cast, you can have this great big, extravagant production, choreography and all these different moving parts,” Steele said. “With a really small cast, creating very intimate moments between the whole entire cast is a lot easier than with a big production.”

Steele is certainly undergoing an introspective process in preparing for her lead role as Mary Mallon, or Typhoid Mary. She was forced to reflect on feelings instilled by COVID-19 and how she has seen her community respond to the virus.

In a sense, she hasn’t really prepared for how to portray Mary’s mindset; it is one that she has developed from what she’s seen in the news and experienced for more than a year now.

Because Mallon was a real person, finding her character was easier than many of her past performances, Steele said. She is also thankful that it isn’t a musical, as singing adds a layer of difficulty to any performance.

Besides that, Steele has her work cut out for her.

Steele does not leave the stage for the entire production, as the majority of the play follows Mary’s interactions with others in the pursuit of understanding her condition.

Even though she doesn’t personally know anyone who has died from COVID-19, she has heard plenty of stories from friends and family, and for this reason, she wants to make her performance as impactful as possible. To evoke genuine emotion out of the audience, to create sympathy for Mary, is her ultimate goal.

“I really want people just to sit back, think about the current state of our world and how it connects to Mary’s story, and possibly what changes they can make to better our world and protect other people,” Steele said.