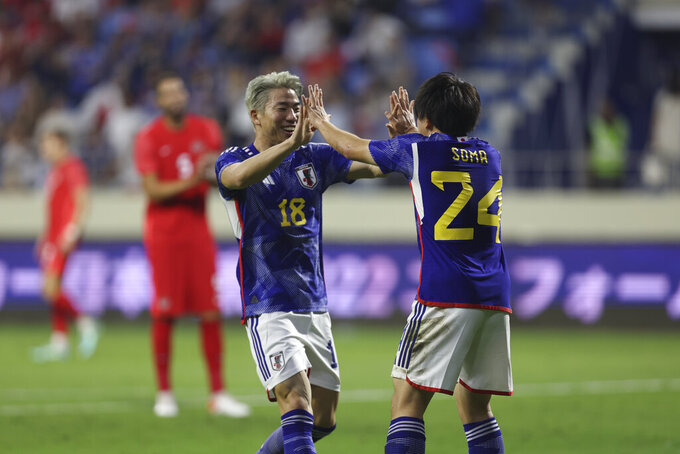 Ansu Fati made the most of his chance back with Spain's national team, scoring a goal and showing he is in great form in La Roja's 3-1 win over Jordan in a World Cup warmup on Thursday.

Portugal, without Cristiano Ronaldo, saw Bruno Fernandes shine in a 4-0 win over Nigeria in its final match before the World Cup.

Fati teamed up well some of the other youngsters giving Spain hope of a successful campaign in Qatar, with Gavi Páez and Nico Williams also scoring a goal each in the team's final match before its World Cup opener against Costa Rica on Nov. 23.

“That's some great news for us,” Spain coach Luis Enrique said of Fati's performance. “He has a good relationship with the goal.”

“I liked what I see from the team,” Luis Enrique said. “I see it with the right attitude. Sometimes, when you play a friendly so close to the World Cup, you don't play a good match, because the players are so focused on the World Cup, but everything went well and now we can start preparing for Costa Rica.”

Luis Enrique had some high praise for Marco Asensio, who set up Fati's goal.

“He was at a different level,” the coach said of Asensio, who played as a striker in the absence of Álvaro Morata.

Fati had not played for Spain since making his fourth appearance as a teenager in October 2020, shortly after breaking the record for Spain’s youngest scorer. He had not been called up by coach Luis Enrique in the last international break before the World Cup, when the 20-year-old forward was not playing often with Barcelona.

He is one of the many youngsters selected by Luis Enrique to Spain’s revamped squad, along with 19-year-old Pedri González, 20-year-old Williams, and 18-year-old Gavi, who had broken Fati’s record by scoring his first goal for Spain at the age of 17 years, 304 days.

After the Group E opener against Costa Rica, Spain faces Germany in one of the most-anticipated matches of the tournament and then takes on Japan.

Luis Enrique couldn’t count on José Luis Gayà because of a right ankle injury sustained in Wednesday’s training session. Also not available for Thursday’s match were Morata, Hugo Guillamón and Marcos Llorente, who had not been fully fit and missed practice at the start of Spain’s preparations.

Luis Enrique said a decision on whether Gayà will remain with the squad is expected to be made on Friday.

Fernandes scored twice in the first half to lead Portugal to an easy victory over Nigeria in Lisbon.

Gonçalo Ramos and João Mário added second-half goals for the Portuguese squad that was without Ronaldo because of a stomach bug that had already made him miss training on Wednesday.

“It was a very complete game,” Fernandes said. “We know we have a very capable team and we showed it.”

Portugal opens its quest for a first World Cup title against Ghana on Nov. 24. It then faces Uruguay and South Korea in Group H.

Ghana, back at the World Cup after missing out at the tournament in Russia, defeated Switzerland 2-0 in Abu Dhabi with second-half goals by Mohammed Salisu and Antoine Semenyo.

Ghana is in Group H with Portugal, South Korea and Uruguay. Its opener is against Portugal on Nov. 24.

Switzerland, playing in its fifth straight World Cup, debuts in Group G against Cameroon on Nov. 24, then faces Brazil and Serbia.

Canada, back in the World Cup after 36 years, came from behind to defeat Japan 2-1 in Dubai with Lucas Cavallini scoring the winner by converting a penalty kick deep into second-half stoppage time.

Japan had opened the scoring with Yuki Soma less than 10 minutes into the match. Steven Vitoria equalized in the 21st for Canada, which is in Group F with Belgium, Croatia and Morocco. It debuts against Belgium on Nov. 23. Japan opens against Germany in Group E before facing Costa Rica and Spain.

Costa Rica’s warmup against Iraq was canceled because of a dispute with Iraq officials related to the entrance of Costa Rican players into the country.