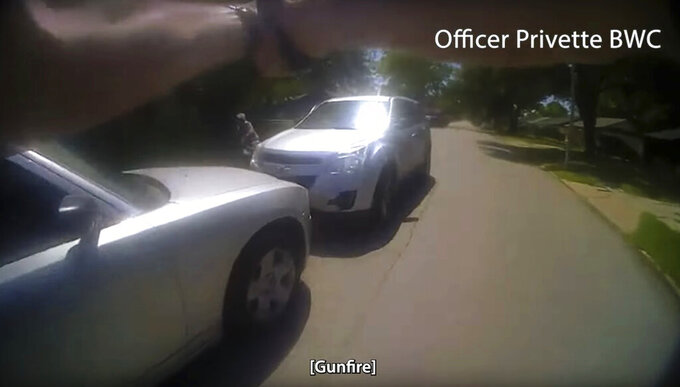 A lawyer for the family of a 29-year-old Black man who was fatally shot last month by a Houston police officer said body camera video shows he was given only seconds to raise his hands before he was shot.

Jalen Randle was shot April 27 as he exited a vehicle, police said. Police said he was being pursued because he was wanted on three felony warrants.

Police released video of the shooting Tuesday after Randle's family demanded it, but Assistant Chief Thomas Hardin said in the introduction to the footage that the department is still in the early stages of its investigation. A spokesman for the Houston police department declined to comment further because of the ongoing investigation.

The video shows the officer firing once almost immediately after yelling “Hey, let me see your hands!” as he got out of a police car. After Randle fell to the ground, the officer uttered an expletive.

Attorney Ben Crump said in a statement that the video shows clearly that Randle had no time to comply with the officer's orders before he was shot. Crump said Randle was handcuffed and drug across the ground before officers rendered aid.

"The brutality displayed in this video is extremely disturbing — from the officer firing a deadly shot seemingly as he ordered Jalen to put his hands up to the way they handcuffed and dragged his lifeless body across the ground,” said Crump, who is one of the nation's top civil rights attorneys and also represented the family of George Floyd after he was killed by Minneapolis police officers, has won financial settlements in about 200 police brutality cases.

Police have said officers tried to pull over a vehicle after seeing Randle get into its passenger seat, but the driver didn’t stop till officers eventually blocked its path.

Crump said previously that an independent autopsy showed that Randle was shot in the back of his neck and witnesses said he was running away.

Police haven’t identified the officer who shot Randle, but the body camera footage released Tuesday is labeled “Officer Privette BWC.” Houston Officer Shane Privette was indicted for using excessive force in a 2017 incident but that charge was dismissed in 2019.