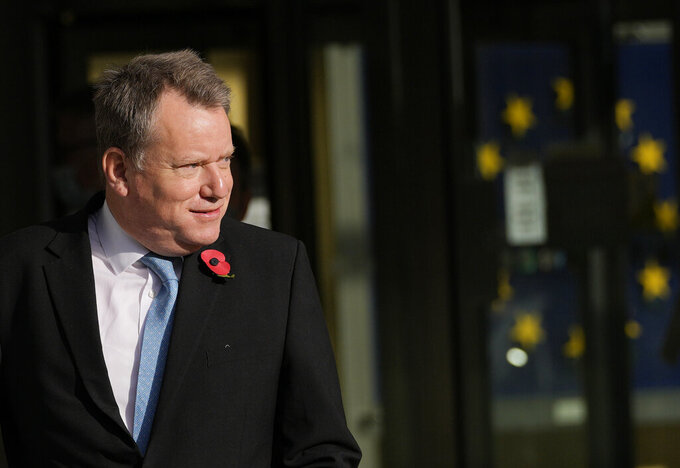 Virginia Mayo, ASSOCIATED PRESS
FILE - Britain's chief Brexit negotiator David Frost arrives for a media statement at EU headquarters in Brussels, Nov. 5, 2021. Britain’s top Brexit official has lowered the temperature in the U.K.’s trade feud with the European Union, saying he believes it is possible to reach agreement with the bloc. Chief U.K. negotiator David Frost said Wednesday, Nov, 17 there are still “gaps” between the two sides, but added that he thinks a deal can be done. (AP Photo/Virginia Mayo, file)

LONDON (AP) — Britain’s top Brexit official lowered the temperature in the U.K.’s trade feud with the European Union on Wednesday, saying he believes it is possible to reach agreement with the bloc.

Chief U.K. negotiator David Frost said there were still “gaps” between the two sides, but added: “I’m glad there’s ambition on the EU side...I think it can be done.”

“Whether it will be done is a different question,” Frost added during a visit to Belfast to update political leaders on U.K.-EU talks aimed at resolving differences over Northern Ireland trade.

Negotiations have dragged on for a month, with Britain threatening to suspend parts of the legally binding divorce agreement between the two sides if no solution is found soon.

Frost said triggering an emergency break clause known as Article 16 “is a very real option for us” if there is no deal. But he added that “it’s certainly our preference to try to resolve it without using Article 16.”

Article 16 lets either side suspend portions of the Brexit agreement in extreme circumstances. A move by Britain to use it would trigger EU retaliation and could spiral into a trade war between the 27-nation bloc and its increasingly estranged former member.

Northern Ireland is part of the U.K. and shares a border with EU member Ireland. Under the Brexit deal agreed before the U.K. left the bloc’s economic structures at the end of 2020, it remains inside the EU’s tariff-free single market for goods, to ensure there is an open border on the island of Ireland — a key pillar of Northern Ireland’s peace process.

That has created a new customs border in the Irish Sea for goods entering Northern Ireland from the rest of the U.K., even though they are part of the same country.

It has also brought red tape for businesses, and has angered Northern Ireland’s British Unionists, who say the checks undermine Northern Ireland’s place in the U.K. and destabilize the delicate political balance on which peace rests.

The Democratic Unionist Party, which leads Northern Ireland’s power-sharing government, is demanding the agreement be scrapped, though many businesses simply want the new trade arrangements to work more smoothly.

The EU has agreed to make changes to the deal, offering to reduce checks on food, plants and animals entering Northern Ireland by as much as 80% and to cut paperwork for transport companies in half.

Britain is demanding the EU go farther and remove its top court from its role in resolving any disputes over the agreement — an idea the bloc flatly rejects.

Frost and his EU counterpart, Maros Sefcovic, are due to meet Friday to assess the state of the talks.

Follow all AP stories on post-Brexit developments at https://apnews.com/hub/Brexit.