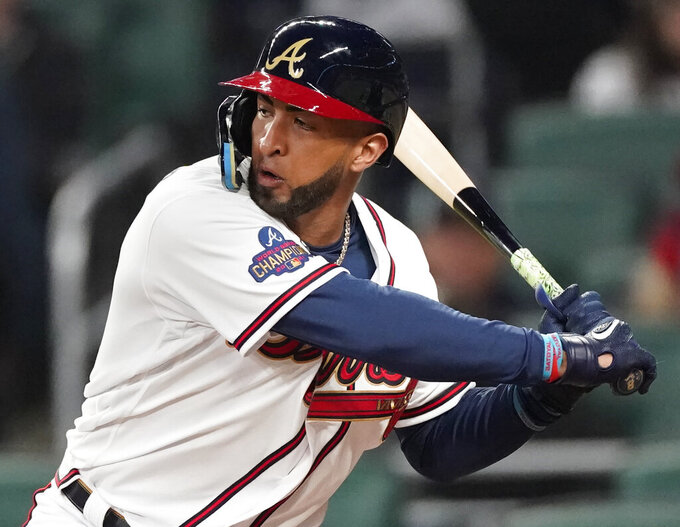 John Bazemore, ASSOCIATED PRESS
FILE - Atlanta Braves' Eddie Rosario bats against the Cincinnati Reds during a baseball game April 8, 2022, in Atlanta. Rosario has been activated from the injured list and is starting in left field against the St. Louis Cardinals on Monday, July 4, 2022. (AP Photo/John Bazemore, File)

ATLANTA (AP) — Atlanta Braves outfielder Eddie Rosario was been activated from the injured list and started in left field against the St. Louis Cardinals on Monday night.

Braves manager Brian Snitker said Rosario's left-handed bat will add balance to a lineup that has been too heavily slanted with right-handed hitters. Switch-hitting second baseman Ozzie Albies is expected to be out until at least mid-August after suffering a fractured left foot on June 14.

“We're so right-handed dominant,” Snitker said. “It's nice to have another left-handed bat.”

The Braves will have a surplus of outfielders when Adam Duvall returns after being hit by a pitch on his left hand on Saturday. Snitker said Duvall “is still going to be a couple days before he can swing.”

When healthy, Duvall and Rosario could share time in left field with rookie Michael Harris II in center field and Ronald Acuña Jr. in right field. Marcell Ozuna, primarily a designated hitter, also has started in left field. Guillermo Heredia is another option.

“We'll keep everybody fresh and we'll see,” Snitker said. “If we get a hot bat, I'm going to ride it.”

To clear spots for Rosario and Matzek, first baseman Mike Ford was optioned to Triple-A Gwinnett and right-hander Silvino Bracho was designated for assignment.

Rosario was placed on the injured list on April 25 due to blurred vision and a swollen right retina. He had a procedure to repair the condition. He hit only .068 in 44 at-bats before landing on the injured list after hitting a combined .259 with 14 homers with Cleveland and Atlanta in 2021.

Ford was claimed off waivers from Seattle on June 10 and was recalled from Gwinnett on June 20. He had no hits in four at-bats in Atlanta.

Bracho, who pitched for Arizona from 2015-20, logged one scoreless inning in his only appearance with Atlanta after being acquired from Boston for cash considerations on Friday.