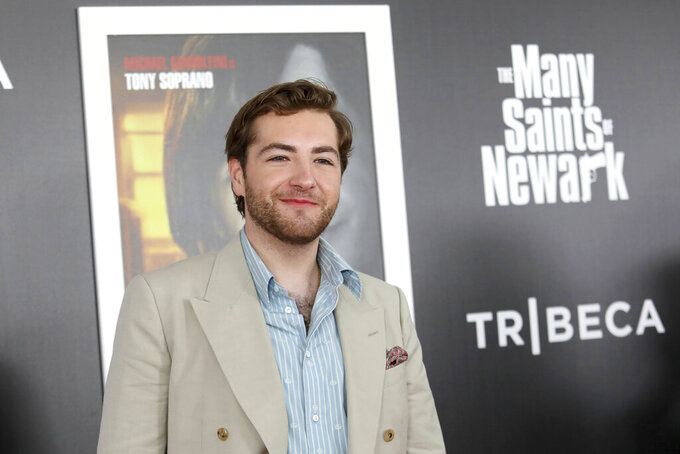 NEW YORK (AP) — Michael Gandolfini's face is thinner. His hair is thicker. His presence gentler. But there's no mistaking it. He looks like his dad.

It's something he's heard many times in his 22 years, especially recently. In “The Many Saints of Newark,” the “Sopranos” prequel, Michael plays a teenage Tony Soprano, inhabiting the indelible mob boss played by his father, James Gandolfini.

Like many, Gandolfini has mixed feelings about hearing that he looks like his dad. But mostly he feels proud.

In “The Many Saints of Newark,” which debuted in theaters and on HBO Max on Friday, Gandolfini put in a kind of work that went beyond playing the part — which, considering Tony Soprano is arguably the greatest protagonist in television history, was already a tall order. Stepping into his father's shoes meant getting to know his dad in a new way, just as Gandolfini was — and still is — finding his own direction as a performer.

“Being in this world, playing this character, it connected me to my dad as an actor — actor to actor — guessing what he went through, and understanding a little more what he went through for nine years and being really proud of him for that,” Gandolfini said in an interview the day after the New York premiere of “The Many Saints of Newark.”

Gandolfini was just 4 months old when “The Sopranos” debuted on HBO and 8 years old when the final episode aired. Before embarking on “The Many Saints of Newark,” he had never seen the series. After his father died of a heart attack in 2013 at age 51, he never found the right time to sit down and watch it.

“I knew nothing about Tony. I had never seen the show,” says Gandolfini. “If my dad was a contractor, I wouldn’t want to see the house he built. I kind of was like: I’ll watch it one day. When he passed, it was going to become a thing to watch it. It was going to be painful.”

Gandolfini acted in high-school musicals growing up in Los Angeles. (He lived there with his mother, Marcy Wudarski; she and James Gandolfini divorced in 2002.) He briefly studied acting at New York University. But much of Gandolfini's acting education has come on sets. He played a busboy in “Ocean's Eight” (2018) and appeared in 10 episodes of HBO's “The Deuce.”

Meanwhile, David Chase, the creator of “The Sopranos” and co-writer of “The Many Saints of Newark,” had been struggling to cast young Tony. It's a supporting role in the ‘60s-’70s-set film; the protagonist is Dickie Moltisanti (Alessandro Nivola), father to Christopher and father figure to Tony. The “Sopranos” director Tim Van Patten mentioned to Chase that Gandolfini might be a natural fit. They met.

“I got it into my head that it was going to work, period," Chase explains. "He auditioned three times, none of which I remember, and I think the reason I don’t remember is because I had already made my mind up. It had to be him.”

The audition process, though, was a relief to Gandolfini. Instead of suddenly being faced with the intimidating prospect of playing his father's defining role, he spent three months mulling it over and getting more familiar with the character.

It also meant Gandolfini finally caught up to “The Sopranos," and saw his dad in a whole new light. His father, who had a tortured relationship with the character, had shielded his son from Tony Soprano.

“That was one of the greatest parts of this. I got to become a fan of ‘The Sopranos.’ I got to watch it for the first time. I got to learn that it was funny. I had no idea,” says Gandolfini. “Tony Soprano to me was my dad in a robe, eating lunch on his break."

Once production started, Gandolfini's focus was on finding Tony Soprano, not trying to play his father.

“Most of the time, if I was doing anything with him, it was to pull him back a little bit from his father and remind him that this character isn’t him yet, he’s still got some of that softness and sensitivity,” says director Alan Taylor.

In the film, Tony's mafioso future isn't yet a foregone conclusion. He's a good, sweet kid into rock ‘n’ roll, partly a victim to the life he's born into. Destiny weighs heavily.

“The striking thing about Michael when you meet him is how gentle he is and how warm and generous and gracious he is,” says Taylor, who directed a number of “Sopranos” episodes. “That’s not the first thing that radiated off Jimmy. He is those things, but there’s a powerful, brutish thing that comes with that. Meeting Michael, I realized this guy is this way because he must have been loved to pieces by his parents.”

James Gandolfini, who grew up in New Jersey the son of a bricklayer and school lunch lady, often spoke self-deprecatingly about acting. He was fond of saying it was his job to wear someone else's pants. Michael Gandolfini's motivation comes from somewhere different. His fascination with the craft, he says, came from sitting in the audience, not standing on the stage.

“I remember sitting in the audience in my first acting class thinking: How do you do that? How do you get up on stage and become another person? I think that’s what I’m still chasing,” says Gandolfini.

“I mean, I think part of that is because of my dad. What was he doing? Where was he on set when I was young?” adds Gandolfini. "The thing that drives me forward is I keep wanting to learn and figure out how to be a good actor. That’s the hunger I have."