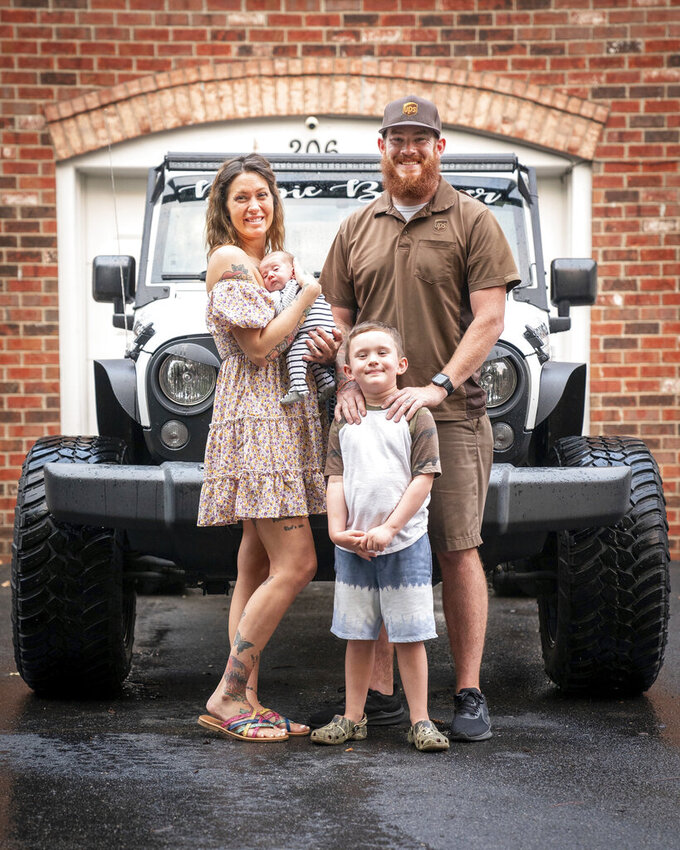 Andrew Nelles, ASSOCIATED PRESS
Ryan and Gayla Thompson with their newborn son, Carson, and 5-year-old son, Connor, outside their home in Hermitage, Tenn., Wednesday, July 7, 2021. Gayla gave birth to Carson in their Jeep while her husband Ryan was trying to drive to the hospital. (Andrew Nelles/The Tennessean via AP)

Or the officer would deliver the baby. They’re trained to do that, right?

Those were the thoughts racing through Gayla Thompson’s mind on June 16 just after 8 a.m. as she sat in the front seat of a Jeep stuck in heavy traffic on I-440 en route to Vanderbilt University Medical Center.

Those also were the things she was actually screaming at her husband.

She was extremely pregnant, in the middle of contractions, but her husband, Ryan Thompson, wasn’t entirely convinced they were contractions.

He did not share her same sense of urgency. He did not perform any of the car maneuvers his wife asked him to do.

“He did nothing,” Gayla Thompson said, still a bit angry, days later.

Maybe it was because he is experienced when it comes to deliveries. After all, he works for United Parcel Service.

Gayla Thompson had their baby in the Jeep, and it ended up being her husband who saved the baby’s life.

They met online in 2014 when she was breaking up with another guy.

She went on a dating website to check the other guy’s profile to see if he was seeking dates with other women.

He was a 6-foot-2 construction worker from California who had just moved to Tennessee. She said it was love at first sight.

For their first date, she invited him over to her apartment in Hermitage.

To feel more comfortable, she said she loaded a 9-mm Beretta and put it on the dining room table. As it turned out, the gun wasn’t necessary.

“It was almost annoying how sweet and generous he was,” she said.

They were married in 2015. There was no ceremony, just an appearance before a Justice of the Peace in Nashville.

She is a wedding photographer with a Dr. Seuss line tattooed on her ankle: “Today you are you, and that is truer than true. There is no one else who is youer than you.”

Connor, their first child, was born in 2016 at Summit Hospital, which was walking distance from their Hermitage apartment.

By the time she got pregnant again in October 2020, Ryan Thompson was no longer a construction worker. He got a job last June at UPS, loading packages overnight. Quickly, he was promoted to delivery driver.

UPS, Gayla Thompson said, is great because it offers top-notch insurance plans. She was happy their new insurance got them an appointment at Vanderbilt for their second baby delivery.

Vanderbilt is 13.3 miles from their home, normally a 25-minute drive without traffic.

They decided weeks ago to name their second boy Carson, which would become so ironic given their son would be born in a car.

On June 14, Gayla Thompson began having pain that felt like contractions, but she wasn’t sure. She thought they were Braxton Hicks, which are sometimes known as false labor pains.

Her husband latched onto the “false” part of that description. If she wasn’t sure, then he was going to try to stay calm.

On June 16, just after 6 a.m. the pain started and Gayla Thompson took a warm bath to try to relax. She told her husband to call his boss to let him know he wasn’t coming in. She felt like this could be the day the baby comes.

But he didn’t want to take a day off if they weren’t sure.

So she convinced her husband to take her to Vanderbilt for a checkup. Something was going on with these Braxton Hicks.

“I can’t feel what she’s feeling,” Ryan Thompson said. “I wasn’t sure.”

She blew her hair dry. He called his boss and said he had to take his wife to a doctor appointment. They packed a bag, just in case.

They got into their white Jeep, which has a decal on the windshield that reads: Boobie Bouncer. (They do some off-roading.)

They dropped off Connor at daycare at 8:25 a.m. and headed for Vanderbilt. Gayla Thompson was convinced she would be delivering the baby. Her husband thought this would be another prenatal appointment.

When he got on I-40 West, about 8:30 a.m., Ryan Thompson saw his map app was directing him to get off the freeway. Instead of a straight shot to Vanderbilt, there was traffic. The couple heard later that a food delivery truck had rolled over ahead of them.

So the phone app re-routed him to Briley Parkway.

She wanted him to keep going straight on I-40. But Ryan Thompson got off the freeway. After a few minutes on Briley, he got on I-440.

“We were stopped dead,” Gayla Thompson said. She remembers yelling, “Why are you following GPS?”

That’s when she started screaming about jumping the curb, breaking the law.

“She definitely let me know,” Ryan Thompson said in an understated way. “She wanted me to speed, but there wasn’t a whole lot of options.”

They were near the Nolensville Pike exit, stuck in the center lane with cars stopped all around them, when his wife moved her seat back and put her legs up.

“I got in birthing position,” she said.

While he was talking with the dispatcher, the baby’s head appeared. Gayla Thompson got out her phone and started taking photos of the baby’s arrival.

A UPS guy delivered his own baby.

Ryan Thompson got out of the Jeep on the freeway and went to the passenger’s side. The baby’s head was out, but there was no crying. The baby wasn’t breathing.

“Babies are supposed to cry,” Gayla Thompson said. “We looked like we were going to have a dead baby on the side of the road.”

The baby wasn’t moving at all. He noticed the umbilical cord wrapped around the baby’s neck.

“That was the scariest part,” Ryan Thompson said.

He slid his finger under the cord, and slipped the cord over the baby’s head.

Her husband had saved their baby.

A firefighter arrived and cut the umbilical cord.

When he got to the hospital, Carson Thompson was seven pounds, three ounces.