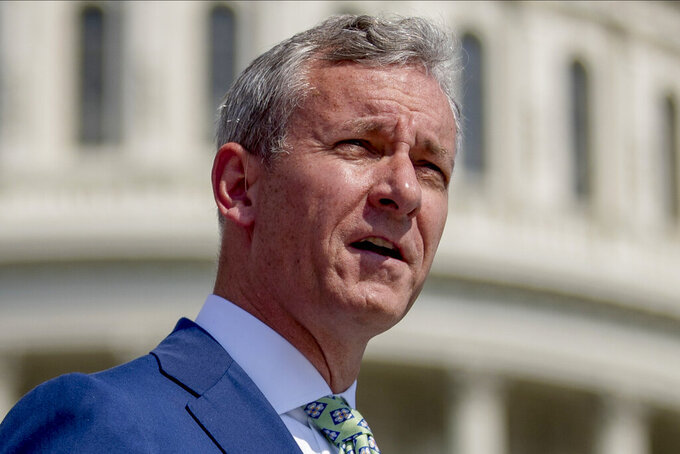 HARRISBURG, Pa. (AP) — Democrats won all three of the most competitive congressional races in Pennsylvania this election cycle, giving the state a 9-to-8 Democratic-to-Republican delegation in Washington for the coming session.

U.S. Reps. Susan Wild in Allentown and Matt Cartwright in Scranton both defeated Republicans in close rematches from narrow contests two years ago, and a Democrat held onto the remnants of what had been Democratic U.S. Rep. Conor Lamb's district before lines were redrawn.

Altogether, the results from Tuesday's election are a boost to Democrats’ hopes to hold majority control of the U.S. House in January.

Wild edged Scheller by 3.7 percentage points two years ago, and the final result this time may end up even closer.

The results in Cartwright's district echoed those from two years ago, when Bognet lost to him by less than 4 percentage points. Democrats holding that seat in a region where the GOP has been making gains in recent years resonates in Washington, as Biden spent his early childhood in Scranton.

Bognet framed Cartwright as one of Biden’s closest allies, while Cartwright drew from cross-party appeal that had previously helped keep him in office.

Deluzio's seat became vacant for this year’s election when Lamb chose not to seek reelection in what was an ultimately failed attempt to get his party’s nomination for U.S. Senate. The candidate who defeated Lamb in the primary, Lt. Gov. John Fetterman, was elected this week to the U.S. Senate.

Deluzio’s campaign biography noted his involvement in an effort to establish a faculty union at the University of Pittsburgh last year.

“The union way of life is a huge thing here in western Pennsylvania,” Deluzio campaign manager Matt Koos said. “And there’s no doubt that the Dobbs decision has put abortion access at the front of voters’ minds.”

Shaffer had said he wanted to position himself in Congress as “a pragmatic, common sense problem solver” who would support term limits and nonpartisan redistricting policies.

As happened across the country, Pennsylvania’s competitive congressional races had Democrats emphasizing support for abortion rights and Republicans reminding voters how inflation and other economic problems are affecting their lives.

In another Pittsburgh-area race, Democratic state Rep. Summer Lee defeated Republican Mike Doyle to take the congressional seat being vacated by the retirement of Democratic U.S. Rep. Mike Doyle. The identical names were the source of some puzzlement during the campaign, and Lee’s Republican challenger used the hashtag #TheRightMike.

In a speech to supporters Tuesday night, Lee nodded to that.

“When we were up against a wall, every single time when it looked like it was getting bleak, friends came from all over,” she said. “When we got into the name confusion and people started wondering, ‘What’s going on?’ we had friends come up.”

She said her watch party was a “scaled down thing, because we’ve been through it.”

“We had to go through ugly to get here,” she said. “There is a reason why there had never been a Black woman, ever, serving (in Congress) in the history of Pennsylvania. So I can assure you they’re not going to let up on us. They’re not going to relent.”

Pennsylvania's delegation has been redistricted twice in recent years — first because of a court challenge and again as a result of the 2020 census — and the state has lost one seat in Congress this year because of its anemic population growth.

Elsewhere in the state, two Republican incumbents faced no opposition this fall: Reps. Guy Reschenthaler south of Pittsburgh and John Joyce in a sprawling district that runs from Gettysburg to Johnstown. Eleven other incumbents also are returning to Congress.

This story has been corrected to delete references to Conor Lamb's former seat being flipped; the district was redrawn and was mostly represented by a Democrat previously.

Brooke Schultz, a corps member for the Associated Press/Report for America Statehouse News Initiative, contributed. Report for America is a nonprofit national service program that places journalists in local newsrooms to report on undercovered issues.