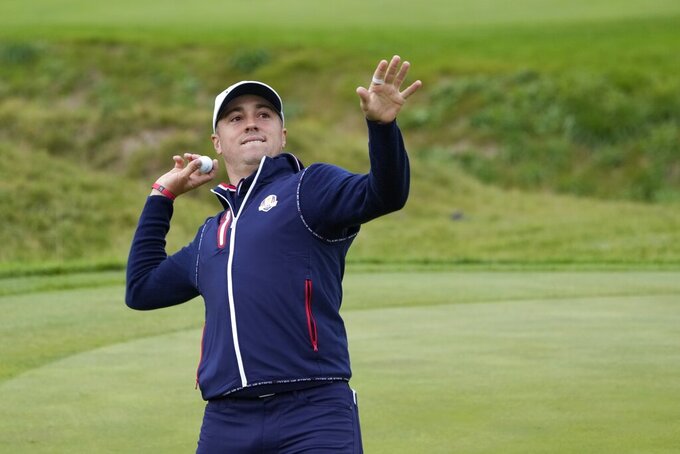 Ashley Landis, ASSOCIATED PRESS
Team USA's Justin Thomas throws a ball to the crowd at the ninth hole during a practice day at the Ryder Cup at the Whistling Straits Golf Course Thursday, Sept. 23, 2021, in Sheboygan, Wis. (AP Photo/Ashley Landis)

SHEBOYGAN, Wis. (AP) — The Latest on the Ryder Cup, the golf showdown between the United States and Europe (all times CDT):

The Ryder Cup will kick off Friday morning with Jordan Spieth and Justin Thomas taking on the latest version of the Spanish Armada, Jon Rahm and Sergio Garcia, in the day's first foursomes match.

They will be followed by Dustin Johnson and Collin Morikawa vs. Paul Casey and Viktor Hovland; Brooks Koekpa and Daniel Berger vs. Lee Westwood and Matt Fitzpatrick; then Patrick Cantlay and Xander Schauffele vs Rory McIlroy and Ian Poulter.

Big-hitting Bryson DeChambeau is not in the lineup. Pairings for the afternoon four-ball will be released mid-morning on Friday.

Spieth and Thomas teamed for all four two-man games in Paris three years ago and went 3-1.

Schauffele and Cantlay went 2-2 together in the 2019 Presidents Cup.

McIlroy and Poulter are 2-1-1 together over their Ryder Cup careers.

Rahm and Garcia have never played together in the Ryder Cup. This is the latest iteration of Spanish pairings, the most famous of which was Seve Ballesteros and Jose Maria Olazabal, who were dubbed the Spanish Armada.

Hand the Europeans another win in the Ryder Cup social media battles.

Their latest entry is called Out of Context, an animated video that pairs audio from players and TV announcers with off-kilter cartoons of things that weren't really happening when those words were said. It's cheeky and clever, in fitting in with most of the Team Europe productions at the Ryder Cup.

And while it might not show every player in his best light, Jon Rahm says it's fitting because “when you're in an environment with no judgment, you’re not scared of anybody posting on Instagram, you can let yourself go a little bit and be vulnerable, and that’s the fun part of things like that.”

The Ryder Cup starts Friday morning at Whistling Straits, where the defending champion Europeans are more than a 2-1 underdog.

It's stocking-cap weather at Whistling Straits, where the European team is on the course for its final practice before the Ryder Cup begins.

Lee Westwood and Matt Fitzpatrick were among those bundled up Thursday morning and teeing off in 55-degree Fahrenheit weather (12 degrees Celsius) with the wind whipping out of the northwest at 20 mph.

The United States has lost nine of the last 12 meetings against Europe, though Tony Finau said he sees a change in culture on the U.S. team, in large part because six players are making their first appearance in the event.

Winds on Friday are expected to gust up to 25 mph, which figures to only add difficulty to a links-like course along Lake Michigan that's one of the toughest these players face.

Some possible good news: The rough on the course is being kept lower than at the average tour stop: "Fairly similar to what you’d find on your local golf course,” according to the head of maintenance, Chris Zugel.