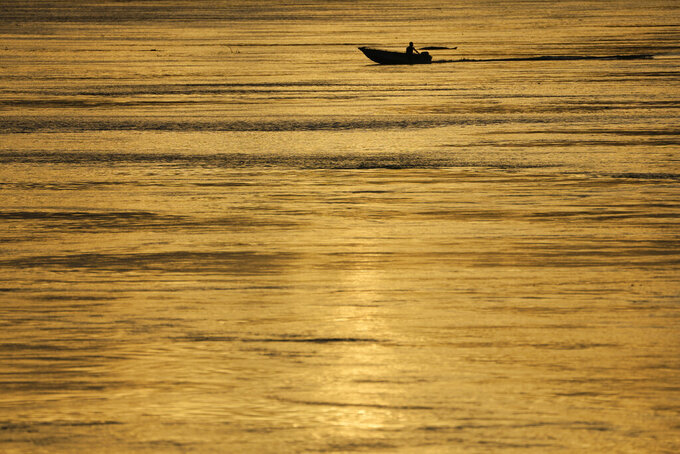 Eraldo Peres, ASSOCIATED PRESS
A boat crosses a branch of the Amazon River at dawn in front of the community of Vila Progresso, on the island of Brique, in the Bailique Archipelago, district of Macapa, state of Amapa, northern Brazil, Sunday, Sept. 11, 2022. Sea erosion is swallowing houses, schools and other facilities in the area. (AP Photo/Eraldo Peres)

MACAPA, Brazil (AP) — Where the mother of all rivers meets the Atlantic Ocean in coastal Brazil, it's not a single channel, instead it braids around 230 kilometers (142 miles) of islands including the Bailique Archipelago.

A native of the mouth of the Amazon, Elielson Elinho, 31, knows that the struggle between the majestic river and the ocean shapes life in these islands. So much so that early this year, his family sensed that the sea was winning, and that it was time to leave.

The Amazon River discharges one-fifth of all the world’s freshwater that runs off land surface. Despite that force, the seawater pushed back the river that bathes the archipelago for most of the second half of 2021, leaving thousands scrambling for drinking water.

“We had to travel upriver by boat for two hours to fetch sweet water. And sometimes it tasted salty even going that far.” Elinho told The Associated Press in his home in Macapa city, where he has lived since August with his wife, Sabrina Fernandes, 25, and their three sons.

The river and the sea push back and forth against each other with different strengths according to the season. During a full moon, the sea invades the river with such strength that, in some places, it turns into a single giant wave of up to 4 meters (13 feet), a phenomenon known as pororoca. The advance of seawater typically occurs in Bailique during the dry season when the Amazon River’s flow diminishes.

Last year, the seawater pushed upriver for longer, around five months. The water tasted saltier and for the first time in several decades, it reached the whole archipelago, eight islands, where about 14,000 people live spread across 58 villages.

“I had never seen it like this before. Not even my parents did it," said Elinho, who, living now in Macapa, is away from the islands for the first time in his life.

Macapa authorities declared a state of emergency in October 2021. But help was scant, Fernandes and other residents say. Her family of four (her third child was born this year) received only 9 liters (2.3 gallons) of mineral water every two months. Even reserving it for drinking, it lasted only a few days.

There is no piped water in the islands. With their drinking water — the river — salty, many Bailique residents had no choice but to use salty water to wash clothes, bathe, cook and brush their teeth, an unpleasant and unhealthy situation.

“We avoided cleaning our faces. The skin gets dry. We used soap, but it makes no foam. When we woke up, our skin was white. For my sons and many other people, it caused itching and they had to use an ointment,” Fernandes recalls.

In January, Elinho's family made their first move, to a community farther from the ocean. During the week, he returned to work on his groves of açai palms, the primary income for hundreds of Bailique families. Much of the açai in the U.S. comes from the mouth of the Amazon.

The water quality was better and the children attended a better school, but they continued facing another chronic problem in the region: electric outages — for months at a time.

The power lines that supply Bailique are hung from poles along the river’s edge. But erosion of the riverbank has intensified, and many poles have begun to slump into the water.

It takes weeks or even months to restore power. Fernandes and Elinho’s family were spending around US $300 a month on gasoline for the generator. So they made a painful decision to move again. When the family left for Macapa in August, the lights still had not been restored.

Besides electrical lines, sea erosion is also swallowing houses, schools and other facilities. One of the most visible places is in Progresso, the Bailique region’s largest village, located close to where the Amazon River touches the Atlantic. On a September morning, the AP team arrived after a 14-hour river trip surrounded by the lush rainforest. The front part of a market had just fallen into the water.

The sea erosion did not even spare the main school. In February, part of its buildings crumbled.

“First, people came to live here. Now they are leaving,” says market owner Manoel Pantoja, 58. After 20 years in Progresso, he plans to move to a community closer to Macapa in December. “The village is approaching its end.”

Macapa authorities did not respond to numerous requests for information about Bailique from The Associated Press.

The changes in the region are also an increasing threat to the omnipresent açai palm trees. In many places, sea erosion is taking them. And in areas closer to the sea, the açai berries began to taste different.

“Some açai tastes salty, and berries have a weaker color. It’s no longer a deep purple. The canopy is thinner and the bunches are smaller,” says Alcindo Farias Júnior, 24, who works as a “peconheiro” or açai picker, a dangerous job that entails climbing high up the slender palm trees.

According to geologist Valdenira dos Santos, who has studied the region for over two decades, several things contribute to the damage, including grazing buffalo, hydropower plants nearby, the natural dynamics of the estuary and on top of that, climate change.

“We are in a coastal system, which is influenced by what happens both at sea and on land. It is a system that changes fast on its own. And now human activities are changing that system,” says Santos, a researcher at the Institute for Scientific and Technological Research of Amapa.

Data is limited: There is no monitoring at the mouth of the Amazon River. The closest official monitoring station is in Obidos, about 700 kilometers (430 miles) upstream.

“Brazil does not have the most basic information to face the challenges of climate change in coastal and maritime areas,” said Santos. “We need ongoing monitoring to have a steady flow of information to plan mitigation and adaptation.”

One of the region's few studies on climate change is led by oceanographer Wilson Cabral, from the Aeronautics Institute of Technology. His team’s field research focuses on Marajo. Located south of Bailique, it is the world's largest fluvial island, about the size of Switzerland.

Based on Intergovernmental Panel on Climate Change scenarios, their analysis estimates that at least half the Marajo municipality most exposed to the sea, Soure, should be underwater by the end of this century.

Projected diminished rainfall in the region means lower flow for the rivers that surround the islands and pour their waters into the Marajo Bay, the study said. In addition, sea level rise will likely increase the advance of seawater toward the island’s interior. The consequences are more saline soils and freshwater near the coast.

For those leaving Bailique behind, an entirely different life in the city of Macapa, the capital of Amapa state, is the obvious choice, but also a difficult one. One-quarter of its 520,000 inhabitants live in slums. It has the worst sewage system among Brazil’s largest cities and is the country’s most violent capital.

Living compressed in one-third of the space of their home in Bailique, Elinho, who now works as an electrical technician, says he worries daily about his family’s safety. Instead of the Amazon River, open sewage now runs past their porch in a working-class neighborhood.

He hasn’t given up on Bailique and plans to use his newfound technical knowledge for a comeback. “In 2025, I will take care of the archipelago’s energy and solve the problem for good.”