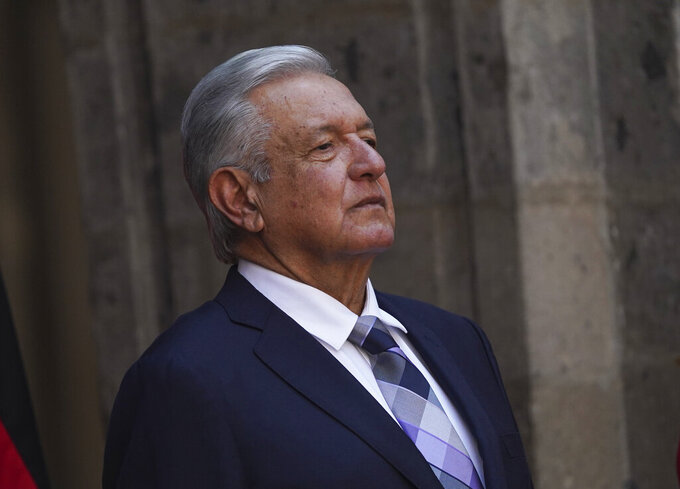 A lot of people in Mexico already have doubts about President Andrés Manuel López Obrador’s Maya Train project. There are questions about its environmental impact and uncertain demand for the train service.

But López Obrador also faces a massive logistical challenge in his rush to finish the train within a year. Millions of tons of ballast are needed to stabilize rail ties, but no suitable rock is available for hundreds of miles. Most of it has to be trucked in from the Gulf coast, about 550 miles (900 kms) away.

López Obrador said the crushed rock could be brought in larger amounts by ship from Cuba, but said he was aware that would spark criticism.

“I am going to say something so that our adversaries question us,” López Obrador said. Pointing to a map of Cuba, he said “It is very likely that for this stretch we will bring ballast from here.”

Even then, the ships carrying Cuban ballast would have to land at the port of Sisal, on the other side of the Yucatan peninsula, and be trucked about 180 miles (300 kms) to some train construction sites.

There is a private Caribbean coast freight dock at Playa del Carmen — right on the proposed rail line — that could handle the Cuban shipments, but López Obrador can't use that dock because he ordered that the U.S. company that owns it be closed down.

“That (port) would be ideal, it is deep enough, but relations are not good” with the company, López Obrador acknowledged.

In May, the Environment Department closed the limestone quarry owned by Alabama-based Vulcan Materials, including the dock.

López Obrador wants the water-filled quarry to be used as a theme park to rival the nearby XCaret park. He also wants Vulcan to build a cruise ship dock at the freight terminal. He has pressured the Alabama-based aggregates company to sell the property to the government, or open a water park itself.

The water park idea is almost certainly a non-starter. The water-filled sections of the quarry, while they look inviting, are populated by crocodiles.

The 950-mile (1,500-kilometer) Maya Train line is meant to run in a rough loop around the Yucatan Peninsula, connecting beach resorts and archaeological sites.

López Obrador touts the train as a way to bring some of Cancun's massive tourism income to inland communities that haven't shared in the wealth. But there are no credible feasibility studies showing tourists will actually want to use the train.

Moreover, with no prior environmental studies, the president decided to cut down a swath of low jungle between the resorts of Cancun and Tulum.