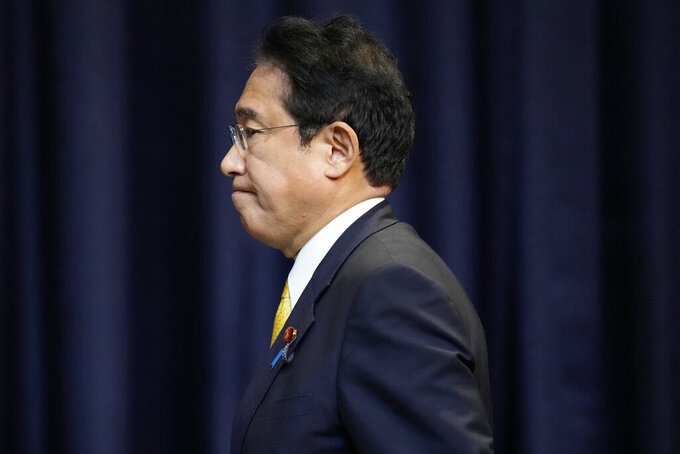 TOKYO (AP) — The internal affairs minister in Japanese Prime Minister Fumio Kishida's government was forced into resigning over funding problems on Sunday, in a blow to the scandal-prone Cabinet that has already lost two ministers in one month.

Minoru Terada has been under fire over several accounting and funding irregularities. In one, he acknowledged that one of his support groups submitted accounting records carrying a dead person’s signature.

“I apologize for the series of resignations," Kishida said. “I'm aware of my heavy responsibility for their appointment.”

On Monday, Kishida pledged to regain public trust. “I will fulfill my responsibility by pursuing important policies that are piling up,” he said and pledged to ensure clarity on the issue of money and politics.

Terada showed up at the Prime Minister’s Office late Sunday and told reporters that he had submitted his resignation to Kishida, though he did not say if he was urged to do so.

“I made up my mind because I must not interfere with parliamentary discussion of key legislations because of my problems,” Terada said.

Terada, who has been grilled over the scandal for over a month, said he did not break any law and promised to fix the accounting issues and had showed determination to stay on. Opposition lawmakers said funding problems for the internal affairs minister, one of whose jobs is to oversee political funds, are serious and demanded his resignation.

“His credibility was already lost and the resignation came too late, and calls Prime Minister Kishida's judgment and leadership into question," Kenta Izumi, head of the main opposition Constitutional Democratic Party of Japan, said in a statement.

Political watchers also said Kishida's lack of decisiveness comes from his weak footing within the governing party. They say Kishida, whose faction ranks fourth-biggest in the party, needs to listen to the voices of three bigger factions including one led by the assassinated leader Shinzo Abe and heavyweights like Taro Aso.

Recent media surveys showed the majority of respondents supported Terada’s resignation, while support ratings for Kishida's government fell to just above 30%, lowest since he took office in October 2021.

Terada's resignation is a further blow to the Cabinet already shaken by the governing Liberal Democratic Party’s close ties to the Unification Church, which has been accused of problematic recruiting and brainwashing followers into making huge donations, often breaking up their families.

Because Terada is a member of Kishida's own faction in the party, his dismissal is seen as an additional embarrassment and a blow to the prime minister's grip on power.

Kishida had been considered as a safe driver and was expected to steer the country over the next three years without a scheduled election after his victory in the July vote, but his popularity has since nosedived over his handling of the party's widespread church ties.

Kishida also came under fire for holding a controversial state funeral for Abe, one of Japan's most divisive leaders, who is now seen as a key figure behind the LDP's decades-long cozy relations with the church.

Abe's friendly ties to the church, as well as of those among many LDP lawmakers, surfaced in the investigations into his assassination. The suspect told investigators his mother had made huge donations to the church, bankrupting his family and ruining his life.

Economic Revitalization Minister Daishiro Yamagiwa quit on Oct. 24 after facing criticism over his lack of explanations about his ties to the Unification Church, starting what became known as “a resignation domino” of the Kishida Cabinet.

Justice Minister Yasuhiro Hanashi was forced to resign over his remark that his job is low profile and only makes news when he signs the death penalty, only 10 days before Terada's departure Sunday.

Kishida's delayed decision in firing the justice minister led him to push back his Nov. 11 departure for three Asian summits, sparking criticism from opposition lawmakers and observers for being indecisive and lacking in leadership.

Kishida returned to Tokyo on Saturday after a nine-day trip and apparently faced pressure from his governing party executives to make a quick decision on Terada before discussions on key legislations resume Monday.

Kishida’s governing party needs to pass the second supplementary budget through March during the current parliamentary session, while also finalizing work on a new national security strategy and mid- to long-term defense guidelines by the end of the year.