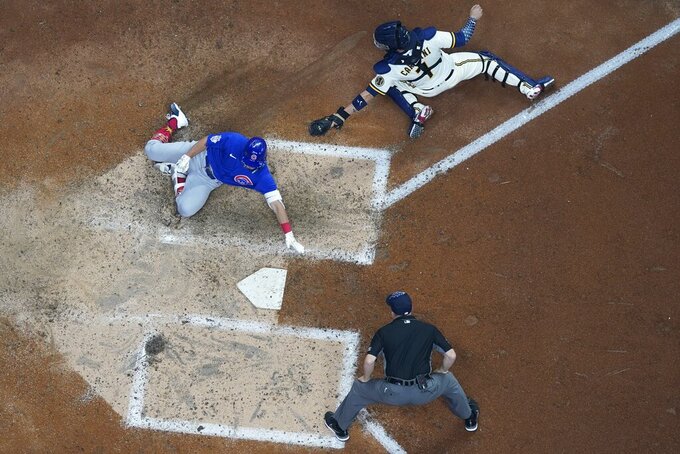 MILWAUKEE (AP) — With one swing of the bat, Victor Caratini turned a forgettable performance into one of the most memorable moments of his career.

After striking out in each of his first four plate appearances, Caratini hit a three-run homer off Scott Effross with two outs in the 10th inning to give the Milwaukee Brewers a 5-2 victory over the Chicago Cubs on Monday.

“It’s a really hard sport,” Caratini said through a translator. "You know you’re going to fail. (It's) just (a matter of) staying confident, going to next at-bat, knowing that you’ve got another at-bat and have got to be able to fight it, help the team win and move on from there.”

His big hit followed an eventful ninth inning that featured an inside-the-park homer from Chicago's Seiya Suzuki and a two-out, bases-loaded walk by Milwaukee's Christian Yelich.

Brewers officials said Caratini was the fifth major league player since 1900 to strike out in his first four plate appearances of a game before hitting a walk-off homer his fifth time up. The others were Mike Schmidt in 1983, Ray Knight in 1986, David Justice in 2001 and Derek Norris in 2015.

Caratini, who played with the Cubs from 2017-20, hit a 2-1 sinker from Effross (1-4) over the center-field wall for his second career walk-off homer. He also did it June 17, 2021, for San Diego against Cincinnati's Amir Garrett.

“I called it,” Brewers catcher Pedro Severino said. “Because normally when you have a tough day, that big moment just comes to you."

Milwaukee's Brad Boxberger (3-1) worked his way out of a bases-loaded jam in the top of the 10th by striking out Willson Contreras and Ian Happ, who had been ahead 3-1 in the count.

“Whatever’s going on, nothing fazes him and he keeps making pitches,” Brewers manager Craig Counsell said. “He’s always got his wits about him.”

A game that started out as a pitchers' duel between Chicago's Justin Steele and Milwaukee's Eric Lauer went haywire in the ninth inning.

It was 1-all when Suzuki, activated from the injured list earlier in the day, hit a drive off Josh Hader that ricocheted off an angled portion of the center-field wall, bounced past center fielder Jonathan Davis and rolled along the warning track back toward right field.

Davis finally chased the ball down and threw to second baseman Luis Urías as Suzuki sprinted around the bases. After Urías threw to the plate, Suzuki slid around Caratini’s tag attempt at the plate.

“Just one of those plays you’ll see once every five years in this park,” Counsell said.

Suzuki was playing for the first time since May 26 due to a sprained left ring finger. He was activated from the injured list earlier in the day.

“Obviously my injury kind of prolonged my time out from this team,” Suzuki said through a translator. “I was very frustrated. So this game kind of meant a lot to me.”

Hader, who entered the game with a 1.05 ERA, was working for the second straight day after throwing 33 pitches in a 2-0 victory at Pittsburgh on Sunday. He also allowed a one-out double to Nico Hoerner but left him stranded at third.

Urías led off with a single and with one out, Keston Hiura hit a ground-rule double that bounced over the wall in left-center field.

Robertson struck out Jace Peterson but hit Kolten Wong with a pitch to load the bases. After the Cubs held a conference on the mound, Robertson stayed in the game and walked Yelich on four pitches to bring home the tying run.

“I had a chance to get out of it and just couldn’t find the strike zone and just let a win slip away from us. … We had a chance to win that game and I just went there and blew it,” Robertson said.

Willy Adames had an opportunity to win the game in the ninth but struck out against Robertson.

Steele held Milwaukee hitless for the first four innings and helped the Cubs carry a 1-0 lead into the seventh, when Severino delivered a two-out, tying double.

Cubs: Contreras left the game midway through the 10th inning with hamstring tightness. ... The Cubs made room for Suzuki by optioning OF Narciso Crook to Triple-A Iowa.

This three-game series continues Tuesday as Kyle Hendricks (4-6, 4.76) starts for the Cubs and Jason Alexander (2-0, 3.82) pitches for the Brewers in a matchup of right-handers.