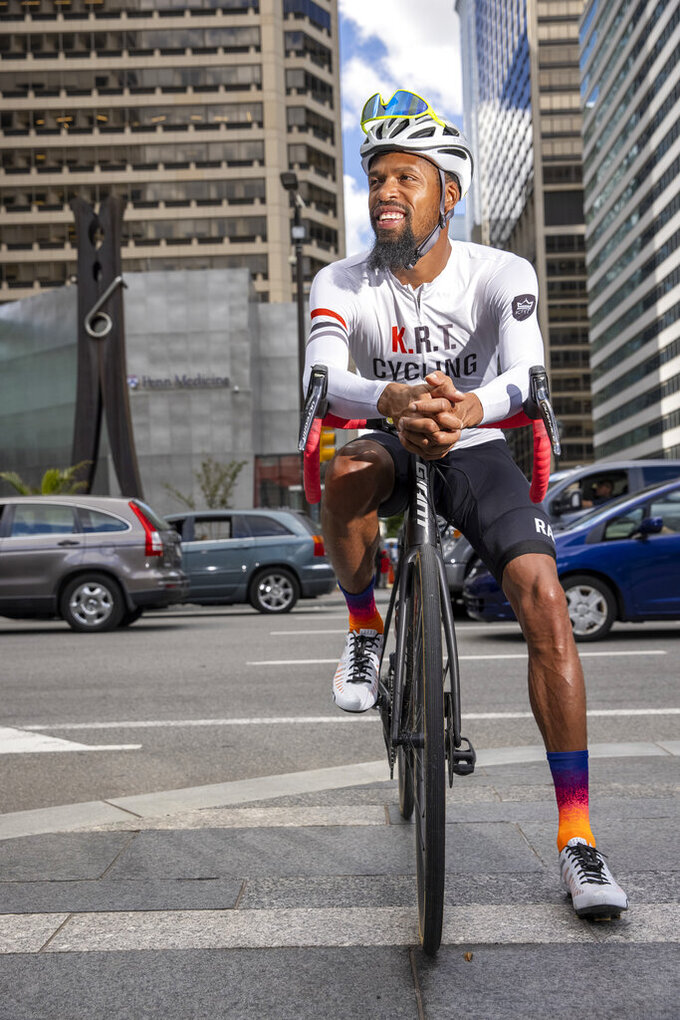 Alejandro A. Alvarez, ASSOCIATED PRESS
Siddeeq Shabazz rides his bicycle by Philadelphia City Hall on Friday, Sept. 3, 2021. Shabazz got into cycling because of the pandemic. Now he rides 200 miles a week, leads team rides and has been on the cover of a bicycling publication. (Alejandro A. Alvarez/The Philadelphia Inquirer via AP)

PHILADELPHIA (AP) — A month after buying a bicycle to help him stave off cabin fever during quarantine last year, Siddeeq Shabazz went on his first group ride through Manayunk and Conshohocken with the K.R.T. Cycling Team.

“They kicked my you-know-what, but I finished and said, ‘I’ll see you next Sunday,’ ” he recalled. “It felt amazing, despite the fact that I was getting killed.”

Shabazz recognized it was his lack of knowledge about how to properly climb hills that had been his greatest challenge.

“So I locked in on learning how to do that and every Monday I would do the ride by myself,” Shabazz, 31, said. “I don’t like saying from the start of something that I’m not good at it. I just don’t have the experience.”

Since that first group ride in May 2020, Shabazz has logged more than 6,500 miles on his bicycle, appeared on the cover of Bicycling magazine, and, for the last year, he’s also led a weekly elevation ride up and down hills for K.R.T. Cycling called “Nose Bleed Tuesdays,” a nod to the nickname for high-elevation seats in a stadium.

“I see how far you can go in a year and I’m not telling people this as some cheesy motivational tactic,” he said. “It’s because I’m living it.”

As a Black cyclist in a sport that “without question” has lacked diversity and representation, Shabazz said he hopes he can raise awareness and be a resource for Black riders and other people of color interested in joining the cycling community.

“I want to be a familiar face for people to speak with and get intel from on how to get in at the ground floor,” he said. “The mission is advocating for cultural diversity.”

Shabazz grew up in Southwest Philly in a family of 12 kids and is currently enrolled at Penn State Brandywine, where he’s studying public relations with an emphasis on corporate communications.

He was going to school and working full-time at an insurance company in King of Prussia when the pandemic hit last year. When the insurance company closed its doors amid stay-at-home orders, Shabazz also lost access to the company’s state-of-the-art gym.

“I didn’t have a gym and couldn’t enroll in one because of pandemic,” he said. “I used to be a runner, but I’m not the biggest fan of what it does to your knees, so I thought ‘Let me get a bike.’ ”

Shabazz got his first bike for $70 online, but when that proved to be too small, he bought another bicycle at a South Philly pawnshop for $200. His friend, who is one of the cofounders of K.R.T. Cycling (which stands for Kings Rule Together), saw Shabazz posting about his new endeavor on Facebook and invited him on that first group ride that kicked his “you-know-what.”

Ever since, Shabazz has been hooked. During the height of the pandemic last year, he was logging at least 200 miles a week on his bicycle.

“At the time when I first started, there was a lot to escape from mentally, from being jobless to my mom battling stage-four cancer,” he said.

While the pain was palpable when he was stationary and confined to his home, when Shabazz got on his bicycle, it was “nothing but the road,” he said.

“I’m one of the lucky people who has found an outlet that really helps me,” Shabazz said. “But for those who struggle to find that, don’t let that stigma that’s attached to actually going to get help deter you.”

In October, Shabazz did a 55-mile ride with 70 people out of Trenton and ended up in the front of the group with another cyclist who happened to work at Hearst Magazines, publisher of Bicycling magazine. Through that connection, Shabazz was asked to model for Bicycling, which is based out of Easton, Pa., and appeared as a featured cyclist in the magazine’s April issue.

“But she knew the issue was coming and that I did the shoot,” he said. “She gave me my hugs and kisses for it and congratulated me for it.”

Shabazz was asked to model again for Bicycling this year for a story about Functional Threshold Power (FTP) tests, a way of measuring a cyclist’s performance level. This time, he ended up on the cover of the June issue.

“Honestly, it felt surreal, I won’t lie,” he said.

But his 10-year-old daughter, Suri, kept him in check.

“As I like to say, she’s very unimpressed,” Shabazz said with a laugh. “She thinks it’s cool, but she’s also playing it cool.”

These days, Shabazz logs about 100 miles a week on “The Dark Knight,” his 2020 Giant TCR road bicycle with razor-thin wheels, a featherlight frame, and a matte-black finish.

He’s not sure where cycling will take him, but he’s considering starting a cycling club for Philly kids and possibly taking up racing one day.

“I think that me not forcing anything has taken me far enough right now,” Shabazz said. “I’m just going to continue being a voice of positivity and inclusion for others in the space and keep doing things with intention.”

Meet Siddeeq Shabazz, a Southwest Philly resident who took up cycling in April 2020 and has since logged 6,500 miles, graced the cover of Bicycling magazine, and become an advocate for cultural diversity in cycling.

• Motivating force: “The goal is to normalize Black faces being seen in cycling and excelling at this. That’s one of the things that’s kept me on a bike.”

• All-season cyclist: “This past winter was my first winter and it showed me it can be done. I’ve coined myself the Winter Soldier.”