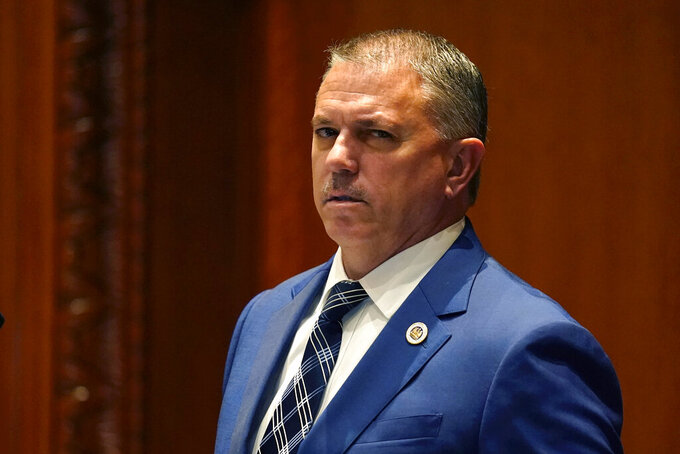 The House speaker confirmed the decisions in a statement to The Associated Press. The committee chairs are expected to be replaced with Republicans next week. That will put GOP lawmakers in charge of 13 regular subject-matter committees, while Democrats will retain three chairmanships.

Schexnayder also removed Jackson Rep. Roy Daryl Adams, who has no party affiliation, from a coveted seat on the House Appropriations Committee that crafts the state's budget and Democratic Rep. Travis Johnson, of Vidalia, from his seat on the Transportation Committee.

“Those members have been removed from committees and chairs,” Schexnayder said in his statement.

All four were among the 30 lawmakers who voted last week against Schexnayder in the veto override effort that collapsed because Republicans couldn’t get enough Democrats or independents in the House to support overturning Democratic Gov. John Bel Edwards' vetoes of bills.

Three of the lawmakers — Adams, Brown and Johnson — voted for a measure to ban transgender girls from participating in school sports but refused to support the veto override effort. The legislation was the driving force behind the veto session. Johnson was a co-sponsor of the bill, but still wouldn't back reversing Edwards.

The Ascension Parish Republican won the speaker’s job because Democrats backed him in a bloc while a majority of Republicans supported another contender. Democrats, however, voted in near unanimity against overturning Edwards’ veto of the transgender sports ban bill, cratering the veto session. Still, Schexnayder needs support from a few Democrats or independents in the House to reach the two-thirds votes required to pass key financial bills and constitutional changes.

Schexnayder wasn’t the only one to retaliate because of the veto session.

Edwards ousted Rep. Francis Thompson — the only Democrat who voted against the governor during the veto session — from a Southern Regional Education Board position Thompson had held for decades. The governor's office said Thompson was replaced by Democratic Rep. Jason Hughes.

Schexnayder didn't go as far as Gurvich and other Republicans had urged. He kept three Democrats in charge of committees: Reps. James and Barbara Carpenter, both of Baton Rouge, and Rep. Randal Gaines of LaPlace.

Committee chairs have wide latitude in scheduling hearings on bills assigned to their panels and in deciding how those bills will be debated. The remaining committees led by Democrats still have a majority of GOP members to sway the outcome of any votes, however.