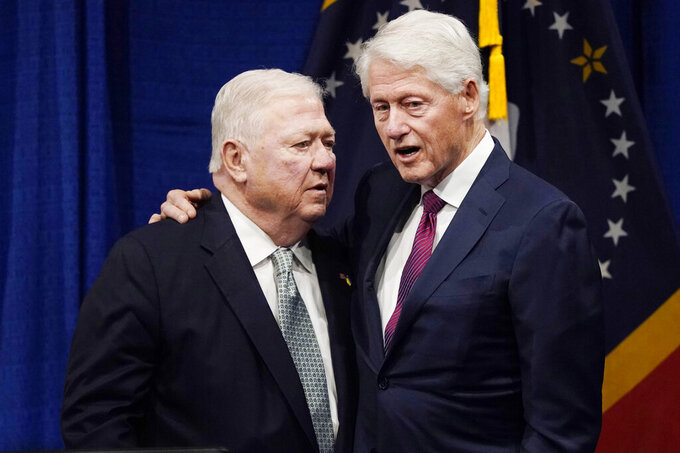 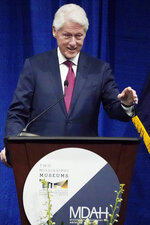 And Clinton said that when he met Elise Winter, he understood how her husband had found happiness in spite of election losses and other setbacks.

Elise Winter, a founder of the Jackson area chapter of Habitat for Humanity, was 95 when she died in July 2021.

Anderson recalled that he and William Winter shared a passion for Mississippi history and a commitment to change the state flag, which was the last in the nation to include the Confederacy's battle emblem. Legislators retired the old flag in the summer of 2020, and voters approved a new magnolia-themed flag months later.

“He was on my mind when I accepted the old flag for the last time it flew over our state Capitol," said Anderson, the first Black person on Mississippi's highest court. “That flag would never have come down had Gov. Winter not started in the early ’80s to call attention to the damage that flag was doing to our state.”

The event was livestreamed from the Museum of Mississippi History and the Mississippi Civil Rights Museum — separate entities under one roof in downtown Jackson. Winter helped persuade state leaders to build the two museums, which opened in 2017.

Barbour said plans originally called for a civil rights museum at Tougaloo College north of Jackson, a historically Black campus that was a haven for the movement in Mississippi. Anderson and Winter came up with the proposal for side-by-side museums near the Capitol, Barbour said.

"I am very proud to tell you today that this is the only civil rights museum in the country built primarily with state money,” Barbour said.

As governor, Winter was best known for pushing Mississippi lawmakers to enact the Education Reform Act of 1982, which set rules for compulsory school attendance, established free public kindergartens and set quality standards for schools and teachers in a state that had long struggled with the intertwined problems of poverty, racial strife and poor academic performance.

Clinton said that in the late 1970s, when he was running for governor of Arkansas, Southern governors "tried to make the schools better, rustle up a few more jobs and do the right thing on civil rights. ... We knew there was a long way to go and you had to start in the schools.

“Maybe we were too optimistic about the benefits that could flow if we equalized educational opportunities, but we all believed it,” Clinton said.

Barbour recalled that in 1979, Winter noticed him on a flight to Washington and, “even though I was a Republican political operative,” asked whether Barbour thought he should run for governor.

“I thought he was the Democrat who'd make the best governor, if the state elected another Democrat,” Barbour said, noting that, at the time, every governor since Reconstruction had been a Democrat.

Elise Winter was instrumental in development of a visitors’ center at the Mississippi State Penitentiary at Parchman, so families could see their imprisoned loved ones.

William Winter joined the Mississippi Archives and History Board of Trustees in 1957. As board president, he oversaw the opening of the Eudora Welty House & Garden, the restoration of the Old Capitol and the construction of an archives and history building that the Legislature named for him.

He encouraged Mississippi Department of Archives and History to strengthen its focus on Black history, acquiring collections of papers, developing exhibits and offering grants for preservation of significant sites. His friendship with Myrlie Evers led to her donating the Medgar and Myrlie Evers Collection to the department in 2002.

Tuesday's event ended with a choir singing “The Battle Hymn of the Republic” — “Glory, glory hallelujah / His truth goes marching on.”