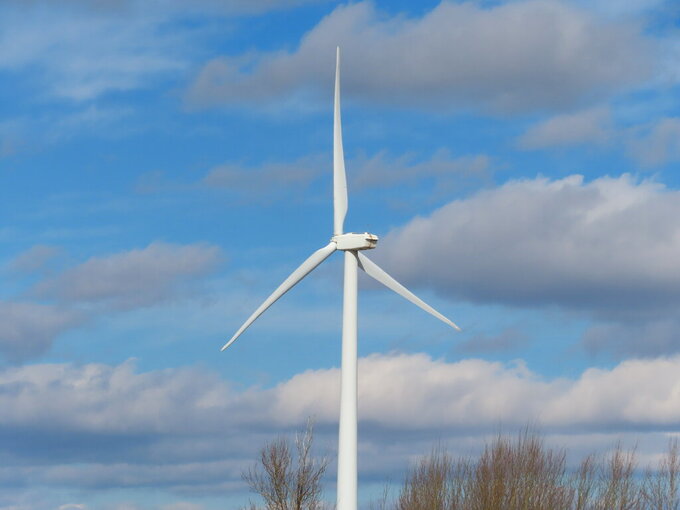 Wayne Parry, ASSOCIATED PRESS
A land-based wind turbine that provides electricity to a sewage treatment plant is pictured on Feb. 18, 2022, in Atlantic City N.J. The developers of a wind energy farm off the southern New Jersey coast said, Monday, April 25,2022, that they have hired two companies to connect the project to the electrical grid on land. (AP Photo/Wayne Parry) 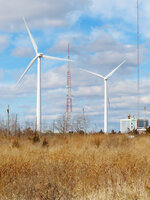 OCEAN CITY, N.J. (AP) — The developers of a wind energy farm off the southern New Jersey coast said Monday they have hired two companies to connect the project to the electrical grid on land.

Ocean Wind 1 has signed contracts with companies that will build electrical substations on land and run power lines from the offshore wind farm to the onshore connection points.

The moves come as New Jersey is working aggressively to become the East Coast hub of the fast-growing offshore wind energy industry.

In February, six companies bid a combined $4.37 billion for the right to build wind energy projects on the ocean floor off New Jersey and New York in the U.S. government’s largest such auction in history.

Before that happened, New Jersey’s Board of Public Utilities approved three offshore wind energy projects: two by Orsted, and one by Atlantic Shores. Those three projects combined aim to provide enough electricity to power over 1.6 million homes.

The Ocean Wind 1 project is among those three, and could provide enough power for 500,000 homes.

Contracts awarded for it include installation of two high-voltage substations and nearly 9 miles of underground cable that will connect the offshore wind farm to the onshore electric grid.

JINGOLI Power, based in Lawrenceville, will install an underground electric cable from the landfall point in Ocean City to the former B.L. England power plant in Upper Township, where it will connect to the grid.

Bringing the line ashore in Ocean City would involve using a small amount of publicly preserved open space that would be replaced nearby. The state Department of Environmental Protection, which would decide whether to approve the land switch, did not immediately respond to a request Monday for an update on the application's status.

Joseph R. Jingoli, Jr., the company's CEO, is one of the local co-owners of Atlantic City's Hard Rock casino.

Kansas City-based Burns & McDonnell Engineering Company, Inc., will install a substation in Upper Township that includes a connection to a nearby Atlantic City Electric substation.

The company will also install a substation at the former Oyster Creek nuclear power plant in the Forked River section of Lacey Township with a connection to a nearby First Energy substation, and install an underground cable from the landfall point to the onshore electric substation.

Ocean Wind's developers did not specify where the landfall point for that line would be, but in previous government hearings, officials said it would be either near the former power plant in Lacey, or at one of two spots in neighboring Ocean Township, known locally as Waretown. A request for comment Monday was not immediately returned.