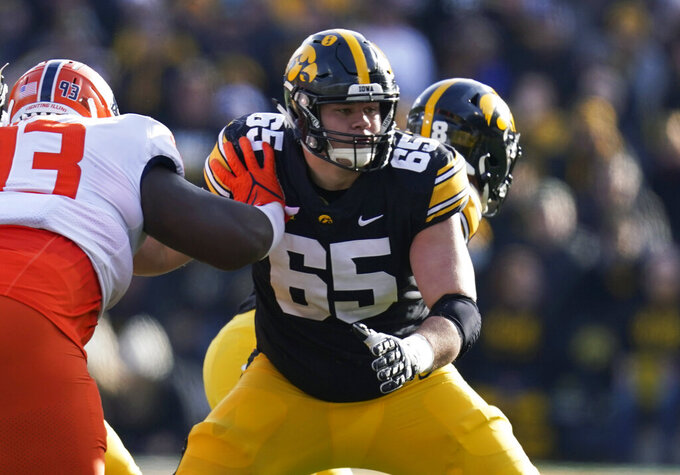 Charlie Neibergall, ASSOCIATED PRESS
FILE - Iowa offensive lineman Tyler Linderbaum (65) looks to make a block during the first half of the team's NCAA college football game against Illinois, Nov. 20, 2021, in Iowa City, Iowa. Linderbaum was selected by the Baltimore Ravens in the first round of the NFL draft Thursday, April 28. (AP Photo/Charlie Neibergall, File)

OWINGS MILLS, Md. (AP) — The Baltimore Ravens did it again, trading a key player and picking up an extra first-round selection in the NFL draft for the second straight year.

This time it was Marquise Brown, a 1,000-yard receiver last season, who was dealt away by the Ravens. General manager Eric DeCosta said that was at Brown's request.

“Marquise came to me after the season and requested that he be traded,” DeCosta said. “Was not happy, and wanted to play elsewhere.”

The Ravens selected Notre Dame safety Kyle Hamilton with the 14th pick in the draft Thursday night. That was their original first-round pick. Around the same time, they announced the trade sending Brown and a third-rounder to Arizona for the 23rd pick. Then Baltimore sent the 23rd pick to Buffalo for the 25th pick and a fourth-rounder.

The Ravens took Iowa center Tyler Linderbaum with that No. 25 pick.

“We made the best of the situation as a club,” DeCosta said. “We used that pick wisely I think.”

Baltimore also had two first-round picks last year. The Ravens received one of them when they traded tackle Orlando Brown to Kansas City.

Marquise Brown was a top target for quarterback Lamar Jackson, but Baltimore added receiver Rashod Bateman with one of those first-round picks last year, and the Ravens also have one of the game’s top tight ends in Mark Andrews. Based on his Twitter activity Thursday night, Jackson seemed disappointed to lose Brown, but DeCosta said the star quarterback had been kept in the loop.

“We do try to communicate with him as best as possible,” DeCosta said. “Explained the situation as best as we could. It's challenging for everybody. Our locker room is very close.”

With this year’s first-rounders, Baltimore tried to shore up the secondary and the middle of the offensive line.

After an injury-plagued season in which the Ravens went 8-9, Baltimore took advantage of a rare chance to pick in the first half of the first round. This year, the Ravens had their highest selection since they took tackle Ronnie Stanley at No. 6 in 2016. It was only the fifth time in the past 22 years that Baltimore picked in the top 16.

The Ravens went with Hamilton in the latest attempt this offseason to bolster their secondary. Baltimore also added safety Marcus Williams via free agency after its defense finished last in the NFL against the pass.

“I know Marcus Williams is already an established safety in the NFL. He just signed a contract, and he’s going to do great things as well,” Hamilton said. “I’m excited to play alongside him, learn from him and take bits and pieces from his game, as well as compete with him.”

It wasn't a surprise that Baltimore went with a defensive player for its first pick. The Ravens have made significant moves on that side of the ball, including a change at defensive coordinator from Don Martindale to Mike MacDonald.

Injuries could be blamed for many of Baltimore's problems in the secondary last year. Cornerback Marcus Peters went down with a knee injury before last season started, and Marlon Humphrey eventually got hurt too.

Hamilton was considered a possible top-five pick by some, but a pedestrian 4.59-second 40 time at the combine may have hurt him. He comes with an injury history of his own after he was limited to seven games in 2021 because of a right knee injury that did not require surgery.

“Never dreamed in a million years that he would be there,” DeCosta said after getting Hamilton in the middle of the first round.

Linderbaum moved from the defensive line to center as a redshirt freshman. He started 35 games over his last three seasons and was a first-team All-American in 2021.

Baltimore has one second-round pick, one third-rounder, six fourth-rounders and one sixth-rounder at this point.