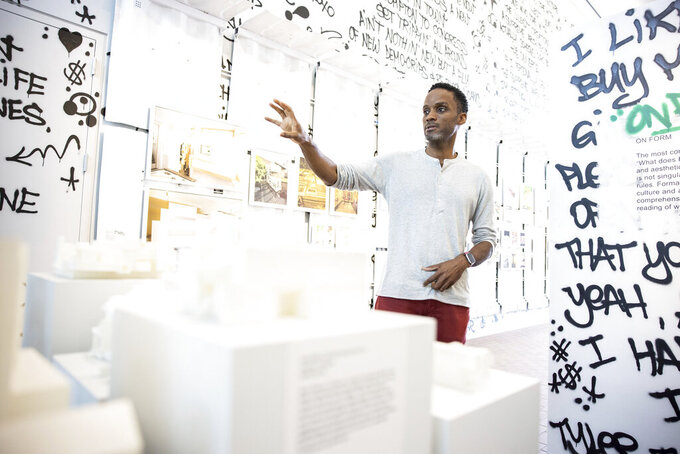 Khadejeh Nikouyeh, ASSOCIATED PRESS
Sekou Cooke, associate professor and director of the Master of Urban Design program talks about the exhibit he curated, Close to the Edge: The Birth of Hip-Hop Architecture, at UNC Charlotte in Charlotte, N.C., Wednesday, May 6, 2022. (Khadejeh Nikouyeh/The Charlotte Observer via AP)

Walk through The Dubois Center at UNC Charlotte Center City and you’ll see rap lyrics from Nas, Slick Rick and Grandmaster Flash and the Furious Five’s hit song “The Message” splashed in graffiti on the walls.

Framed photos hang on fragments of a shipping container, showing concepts of projects that could be interpreted as hip-hop architecture. There are 3-D models, devoid of color, showing distorted, off-grid structures that shift your thinking about what a traditional building looks like.

In the background, clips of radio interviews on the topic, along with songs like “N.Y. State of Mind” by Nas, play through a set of speakers.

Defining the topic gets problematic, Cooke said, because it can lead to the style becoming a commodity.

“Then that becomes something that’s appropriated,” he said.

Cooke started the exhibit in Manhattan in 2018. It has since moved to St. Paul, Minnesota, and, now, Charlotte. It’s about the roughly 30-year history of hip-hop architecture and the people who have tried to bring hip-hop’s identity to their work.

At first, Cooke wrote, he was filled with pride. Had the field finally “arrived” after years of being mocked and discouraged? Soon, though, he started feeling anger at the thought of once again being rolled over by The Man.

He ultimately responded this way: “Why would you even want to? Y’all are doing just fine.”

Architects who connect with the field in a real way, Cooke said, ultimately will use the blueprint in their own work.

“People who it’s meant for are going to connect with it.”