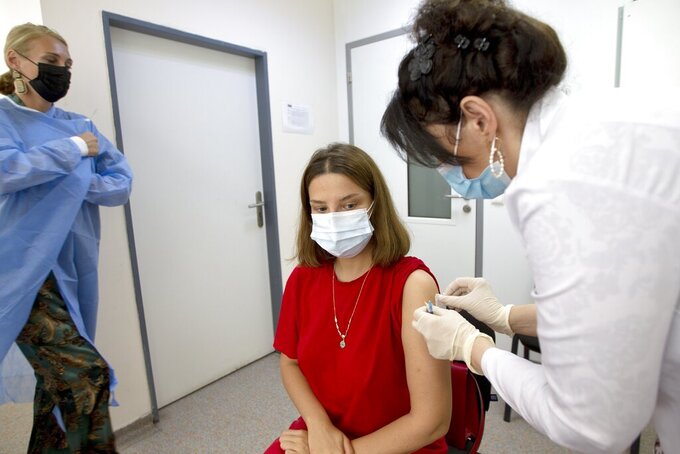 Shakh Aivazov, ASSOCIATED PRESS
A medical worker gives an injection of Pfizer coronavirus vaccine to a woman in Tbilisi, Georgia, Tuesday, July 27, 2021. The US has donated half a million doses of the Pfizer coronavirus vaccine to Georgia, which arrived in the capital on Saturday, July 18, 2021. Georgia has registered more than 395,000 COVID-19 infections with over 5,500 deaths, according to Johns Hopkins University data. (AP Photo/Shakh Aivazov)

SEOUL, South Korea — South Korea is reporting a new daily high for coronavirus cases a day after authorities enforced stringent restrictions in areas outside the Seoul capital region seeking to slow a nationwide spread of infections.

It was the highest daily jump since the pandemic began and surpassed a previous record of 1,842 announced last Thursday.

The Seoul area has been at the center of the outbreak. On Tuesday, the government put much of the non-Seoul regions under the second highest distancing guidelines to guard against a nationwide viral spread.

— CDC recommends indoor masks in some parts of US, at schools

BEIJING — Drivers seeking to leave eastern China’s Jiangsu province will have to show a negative coronavirus test taken in the last 48 hours or be forced to turn around, as infections in the province continue to rise.

The provincial transport department said Wednesday that 93 checkpoints have been set up on highways in the province, whose capital of Nanjing is the epicenter of China’s latest outbreak. Drivers must remain in their vehicles and wear masks while health workers carry out the checks.

The National Health Commission reported 48 new cases in Jiangsu over the previous 24 hours, bringing its total to 154 over recent days. Authorities say the virus being transmitted is the highly contagious delta variant.

The virus continues to spread despite China having administered more than 1.5 billion doses of vaccine — exceeding the entire Chinese population of 1.4 billion.

LAS VEGAS — Nevada officials are re-imposing a mask mandate for indoor public spaces in the state’s cities in an effort to stem the spread of the coronavirus amid a rise in cases and hospitalizations not seen since before the arrival of vaccines.

Authorities officials said Tuesday the order will align Nevada with a new recommendation from the U.S. Centers for Disease Control and Prevention calling for people to use masks even if they are vaccinated.

The increase in cases and the mask requirement could hamper tourism industry efforts to entice visitors and trade shows that power the state’s economy to return following closures last year.

LITTLE ROCK, Ark. — Arkansas Gov. Asa Hutchinson says a special session to revisit the state’s ban on mask mandates in schools is an option as the number of COVID-19 hospitalizations in the state has surpassed 1,000.

The governor met with legislative leaders Tuesday to discuss the possibility of a holding a session on the ban enacted in April that bans local and state government entities, including schools, from requiring the use of masks.

Facing growing calls to lift the ban, at least for schools. Hutchinson says he is evaluating options for changes. Legislative leaders say they’re talking with lawmakers about what action they would support.

Arkansas’ COVID-19 hospitalizations grew by 45 to 1,025, its highest number since late January. The state’s virus cases grew by 2,052.

HARRISBURG, Pa. — Pennsylvania Gov. Tom Wolf says he is not considering a statewide mask mandate as coronavirus cases increase in the state, and his administration says it will not require masks in schools.

The comments came as the CDC issued a new recommendation that even vaccinated people wear masks in areas where infections are rising.

Wolf told KDKA-AM in Pittsburgh on Tuesday that his strategy for fighting the spread of the coronavirus is to get more people vaccinated. The governor says Pennsylvania had a mask mandate when there was no vaccine.

In Wolf's words: “People have the ability, each individual to make the decision to get a vaccine. If they do, that’s the protection.”

JACKSON, Miss. — Mississippi Gov. Tate Reeves does not plan to issue a mask mandate for schools even as coronavirus cases are increasing in the state, which has one of the lowest vaccination rates in the nation.

A spokeswoman said Tuesday that “Governor Reeves has no intention of requiring students and staff to wear masks when they’re in school this fall.”

A few Mississippi school districts have already started classes, and others are starting by mid-August. Some parents have raised concerns about the virus spreading among children too young to be vaccinated, and many school districts have said they will not require students or employees to wear masks because the governor has not set a mask mandate.

The CDC issued a new recommendation Tuesday saying that even vaccinated people should wear face covering if they live in areas where infections are rising.

COLUMBIA, South Carolina — South Carolina education officials say recently enacted legislation will prevent them from requiring students and employees to wear masks inside schools as a result of a new recommendation from the CDC that even vaccinated people should use face coverings in regions with increasing numbers of coronavirus cases.

A budget proviso that went into effect July 1 prohibits the state’s school districts from using any appropriated funds “to require that its students and/or employees wear a face mask at any of its education facilities.”

The measure was backed by Gov. Henry McMaster, who earlier this year called it “the height of ridiculosity” for a school district to require a mask over any parent’s wishes.

The state Department of Education says on its official Facebook page that it can only encourage the use of face coverings and other COVID-19 mitigation strategies.

In a statement Tuesday, the governor said that “the Biden Administration’s new COVID-19 guidance telling fully vaccinated Iowans to now wear masks is not only counterproductive to our vaccination efforts, but also not grounded in reality or common sense.”

She was reacting to a recommendation from the CDC advising people in regions with increasing infections to wear masks in public indoor settings.

Reynolds adds that she is concerned the federal guidance could result in mask mandates for schools.

But already this week he opposed the idea of mandating their use in schools and expressed fear the federal government might try to force their use.

At a meeting Monday, DeSantis also predicted Florida lawmakers will hold a special session “to be able to provide protections for parents and kids who just want to breathe freely and don’t want to be suffering under these masks during the school year.”

A spokeswoman released a statement Tuesday saying that “Governor DeSantis believes that parents know what’s best for their children” and thinks the decision should be left to them. It adds that “fortunately, the data indicate that COVID is not a serious risk to healthy children.”

ATLANTA — Georgia’s largest school district has joined the growing ranks of those that will require students and employees to wear masks regardless of vaccination status as coronavirus cases continue to rise across the state.

The 177,000-student Gwinnett County school district became the latest to reverse a mask-optional policy, citing new guidance from the CDC on Tuesday recommending mask use in area where infections are increasing.

The Savannah-Chatham and Clarke County school systems also said everyone must wear a mask, while Emory University said all employees must get vaccinated.

The state Department of Public Health reported more than 3,700 new cases. That was more than double Monday’s total and the highest number since late February. The number of confirmed COVID-19 patients hospitalized statewide rose above 1,500 for the first time since early March.

LANSING, Mich. — Gov. Gretchen Whitmer has resumed wearing a mask at indoor events, citing revised guidance from the CDC and a recommendation from Michigan’s chief doctor.

However, Whitmer added Tuesday that she does not anticipate reinstating a mandate requiring the use of face coverings — “not in the near future and maybe not ever.” The governor is vaccinated.

While daily COVID-19 cases have been rising in Michigan, the state’s two-week rate is lower than in all but three states.

Whitmer says that “I wear it not because I’m worried about me but because I worry about those who aren’t vaccinated yet."

TOPEKA, Kan. — Officials in two major Kansas health care systems are urging people to resume wearing masks indoors even if they’ve been vaccinated against the coronavirus because of the faster spreading delta variant.

The comments from administrator-doctors at Stormont Vail Health in northeast Kansas and the University of Kansas Health System came just before the CDC recommended that even vaccinated people wear masks indoors in places where the coronavirus is surging.

Their comments came a day after the board of education in one of Kansas’ largest public school districts approved a mandate for elementary students to wear masks when classes resume in mid-August.

Kansas has seen its average number of new COVID-19 cases a day increase for nearly five weeks because of the delta variant, to numbers last seen in mid-February.

WASHINGTON — President Joe Biden says that requiring all federal workers to get vaccinated against the coronavirus is “under consideration,” as the more infectious Delta variant surges across the United States and a significant chunk of Americans still refuse the shot.

Speaking Tuesday after delivering remarks at the office of the Director of National Intelligence, Biden affirmed that his administration was considering the possibility in response to a reporter’s question.

His comments come the day after the Department of Veterans Affairs became the first federal agency to require its healthcare workers receive the coronavirus vaccine.

Earlier Tuesday, White House press secretary Jen Psaki left the door open to more agencies implementing similar requirements, saying that the administration would “continue to look at ways to protect our workforce and save more lives.

The new figures come as state officials increasingly urge the public to get vaccinated as medical staffs again are stretched thin by the state’s fourth surge since the pandemic began.

Meanwhile, Mayor Ronny Walker of the north Louisiana city of Ruston has been hospitalized with pneumonia related to a “breakthrough” case of COVID-19 after being vaccinated.

Walker tells the Ruston Daily Leader that he believes his illness would have been worse had he not been vaccinated.

FORT LAUDERDALE, Fla. — In South Florida, the Broward County school board postponed a meeting Tuesday about whether students should wear masks in the classroom this fall when about 20 anti-mask protestors refused to don them. Board spokeswoman Kathy Koch told the South Florida SunSentinel that everyone who visits the district’s headquarters is required to wear a mask.

“Most of them said they had a medical waiver, but you cannot prove it nor can you ask for it,” Koch said. So for the safety of everyone, the discussion was rescheduled for Wednesday.

The delay angered the protestors, who called on Gov. Ron DeSantis, a strong mask mandate opponent, and the state government to override any mask mandate imposed by Broward or others school districts.

“We need a special session of the state Legislature to ban this kind of crap right now,” said Chris Nelson, founder of the anti-mask group Reopen South Florida. He threatened to go to the board members’ homes and neighborhoods to confront them directly.

ST. LOUIS — As COVID-19 hospitalizations climb, St. Louis is offering incentives for some city employees to get immunized, while thousands are registering for a statewide vaccine lottery.

St. Louis said in a news release Tuesday that nearly 6,000 of its workers will be eligible to receive $100 in gift cards and can use paid time off to get vaccinated. The announcement comes one day after a mask mandate took effect in the city and St. Louis County.

Missouri has the nation’s fourth-worst COVID-19 diagnosis rate over the past week, with one in every 360 people diagnosed with COVID-19.

To help, the state rolled out a vaccine incentive program last week that includes $10,000 prizes for 900 lottery winners. About 250,000 people have registered so far, said health department spokeswoman Lisa Cox.