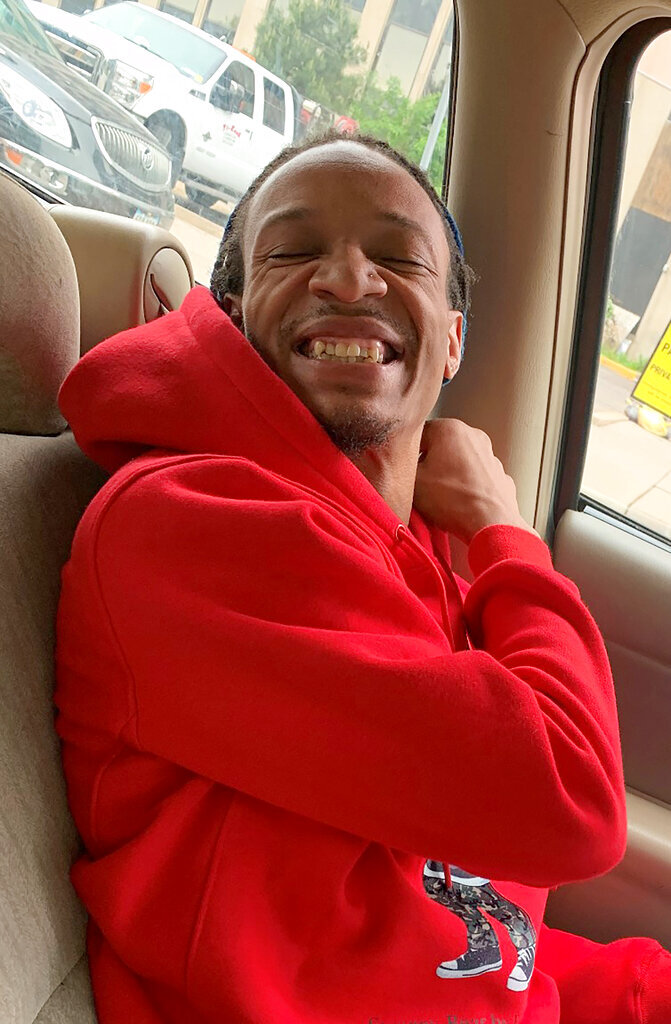 Norhan Askar, ASSOCIATED PRESS
In this May 31, 2021, photo provided by Norhan Askar, Winston Boogie Smith Jr., is seen in Minneapolis Norhan Askar who was with Winston Boogie Smith Jr. when he was fatally shot by members of a U.S. Marshals Service task force during an arrest attempt in Minneapolis said through her attorneys Thursday, July 22, 2021 that the law enforcement officers were not in uniform and did not identify themselves as authorities when they surrounded the SUV with their guns drawn. (Norhan Askar via AP)

MINNEAPOLIS (AP) — A woman who was with a St. Paul man when he was shot and killed in Minneapolis by members of a federal task force is suing local authorities and has signaled her intent to sue the U.S. Marshals Service, saying she was emotionally traumatized and her civil rights were violated, her lawyers said Friday.

Norhan Askar was on a date with Winston Boogie Smith Jr. and was sitting in an SUV in a Minneapolis parking ramp on June 3 when Smith, who was Black, was fatally shot as authorities tried to arrest him on a weapons violation.

Authorities said Smith showed a handgun and that evidence shows he fired it. Askar’s attorneys have said she never saw a gun on Smith or in his vehicle and that he was shot after he held up a cellphone to begin recording.

Askar is seeking $15 million from the Marshals Service, according to a letter dated Wednesday in which her attorneys notified the agency that they would file a federal civil rights and torts claim in six months if the issue isn’t resolved. Such notice is required under the Federal Tort Claims Act before a lawsuit can proceed.

Christopher Nguyen, one of Askar's attorneys, said the $15 million is a starting figure. He said there are no settlement negotiations at this time.

Askar's attorneys are also pursuing a personal injury claim in state court against Hennepin and Ramsey counties, and against the Hennepin and Ramsey county sheriff's offices and against the two deputies who fired their weapons. According to that claim, which Nguyen said was served on the parties but not filed in court, the task force members denied Askar's civil rights, were negligent, committed assault and inflicted emotional distress.

Among other things, Askar claims her civil rights were denied when the task force officers prevented her from leaving by using a vehicle to ram into the back of Smith's SUV, smashing it into a barrier and leaving her trapped. She said authorities did not identify themselves as law enforcement as they surrounded the SUV, pointed guns at her, shouted commands and ultimately fired their weapons.

She also claims the officers demonstrated a conscious disregard and deliberate indifference to the risk that Askar would be killed or seriously harmed. Askar was hurt by shattered glass and is seeking damages for her physical and emotional injuries.

A spokeswoman for Hennepin County said she wasn't aware of the lawsuit and that it would be inappropriate to comment if litigation was pending. Ramsey County didn't immediately reply to requests for comment.

According to court records, Smith was wanted for allegedly being a felon in possession of a firearm.

State investigators have also said they were unaware of any video of the incident. Investigators said there is no body camera or squad camera footage, and they are unaware of surveillance video.

Local officials have said the deputies were assigned body cameras but were told by the Marshals Service that they couldn't use them, despite an October change in Justice Department policy that would have allowed them to be used. The lack of body camera footage has raised questions, as Smith’s family members and activists have demanded transparency.

When Smith was shot, Minneapolis was already on edge following the death of George Floyd over a year earlier, and the fatal shooting of Daunte Wright by an officer in nearby Brooklyn Center in April.