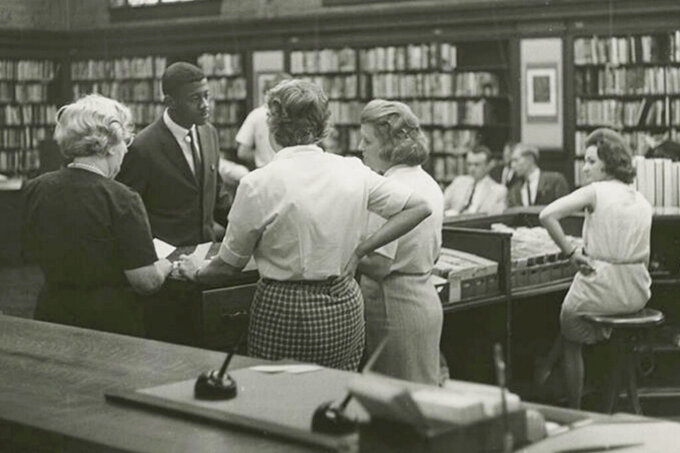 Birmingham News, ASSOCIATED PRESS
Miles College student Shelly Millender, standing in suit, is shown during an effort to desegregate the public library in Birmingham, Ala., on April 10, 1963. Millender, a Black Army veteran who helped peacefully desegregate an Alabama city's library with a sit-in protest in 1963, died on Saturday, July 17, 2021, according to the library and an obituary published by his family. He was 86. (Birmingham News/Alabama Department of Archives and History via AP)

BIRMINGHAM, Ala. (AP) — A Black Army veteran who helped peacefully desegregate an Alabama city's library with a sit-in protest in 1963 has died, according to the library and an obituary published by his family.

Shelly Millender Jr. of Birmingham died on Saturday. He was 86.

Millender already was a veteran when he attended Miles College, a historically Black school where he was student government president and became active in the civil rights movement.

Recruited by Southern Christian Leadership Conference director Wyatt T. Walker, Millender was among the students who staged a sit-in at Birmingham's main downtown library on April 10, 1963, to demonstrate against a policy that banned Black people.

"Shelly Millender engaged the librarian who told him you should be going to the colored library. Shelly said, ‘No I want to use this library,’” Wayne S. Wiegand, who wrote “The Desegregation of Public Libraries in the Jim Crow South: Civil Rights and Local Activism,” said in an interview with a library official in 2018.

“The librarian must have called the police. The police came, but didn’t bother to arrest them. Because they weren’t arrested, the students then left because they were there to be arrested,” Wiegand said.

Library leaders agreed to end segregation soon after in what was described as one of the few peaceful desegregation efforts in Birmingham, a flashpoint of civil rights demonstrations because of its strict enforcement of race-based separation and oppression.

Wiegand said library leaders were worried about the reputation the city was gaining because of white segregationist Eugene “Bull” Connor, the police commissioner who unleashed dogs and fire hoses on civil rights demonstrators.

“The fact the library became integrated peacefully in the middle of that violent summer is kind of lost on people. It was the sole site of racial conciliation in the middle of a town that was hosing African Americans and turning dogs on them,” Wiegand said.

Millender spent decades selling cars and served as host of a radio show after retirement. Survivors include two sisters, three children, a lifelong companion and her son, the obituary said.