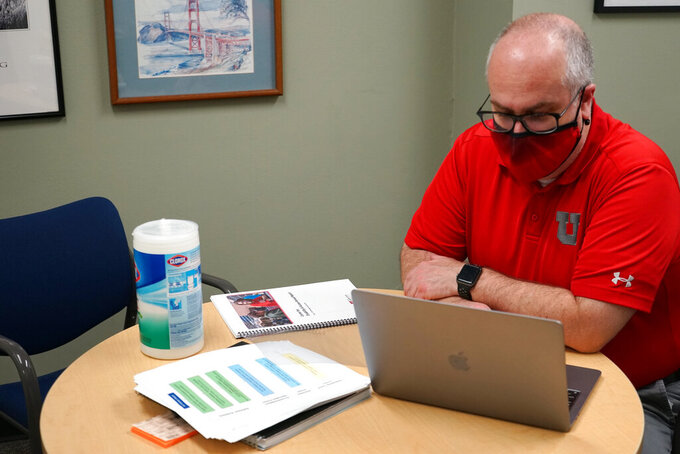 Emily Means, ASSOCIATED PRESS
Scott McAward, director of the University of Utah's Center for Disability and Access, is shown in an undated photo. McAward said he's seen some students with disabilities who were able to return to finish degree programs with online learning options during the pandemic. (Emily Means/KUER via AP)

SALT LAKE CITY (AP) — Anna Stephens is a physics and astronomy student at the University of Utah. At first, she hated the idea of attending class remotely last school year.

Stephens deals with chronic pain and fatigue. She’s also autistic and has ADHD.

“In the past, I had not done well with online classes,” she told KUER-FM. “For me, they’re not structured in a way that really works with the way I learn. I thought for sure that I would not pass my classes, that I would have to drop out altogether.”

But she said her professors eventually got the hang of posting notes and lectures online, and that gave her a lot more flexibility to learn on her own terms.

So, Stephens fully leaned into the online schooling life, creating an at-home learning environment to meet her physical and mental health needs. She has an ergonomic keyboard on her desk shaped like a pyramid to help manage the pain in her hands. She also has a basket of sensory stimulators to fidget with, like a ball of putty to stretch or a cube with buttons to click.

Plus, she has a great roommate — her cat, Tasha, who frequently makes cameos in Stephens’ Zoom calls.

“She was an unexpected comfort when it came to moments of high anxiety, which was quite frequent in the last year-and-a-half,” she said.

That anxiety kicked in again in the runup to this semester when Stephens thought of returning to campus in person. She said her condition made her realize how important it was for her to have the option to attend class remotely.

“There was certainly more than one occasion where I could not physically get out of bed, or if I could, I wasn’t going much further than my desk,” she said.

Scott McAward, director of the University of Utah’s Center for Disability and Access, said for some people the shift to virtual schooling made things harder for some people with disabilities and created more barriers to learning.

But he said for others, like Stephens, they had better access to their education because of technology.

“We actually saw some students return to classes that had not finished their degree program, but were able to do remote learning for courses they’ve never had the opportunity to do,” McAward said.

His office works with around 1,700 students a year. Most have what he called a “non-apparent” disability, like depression, ADHD or some chronic illnesses.

Angela Smith, head of the University of Utah’s disability studies program, said in many ways, reimagining how society works during the pandemic has leveled the playing field between disabled and non-disabled people.

“Once everyone had to rethink how they lived their lives, suddenly a whole host of things became possible that people with disabilities have previously been told weren’t possible,” Smith said.

She said students asked to participate remotely in the past and as a professor, she admits it was challenging for her to make that transition to online learning.

Still, Smith said policies that promote going back to the way things used to be before the pandemic ignore how excluding it was for many people.

“It just feels like a huge loss to throw away those insights about how interconnected we are and about how we need to attend to everyone’s needs, not just throw away a bunch of people because their needs are outside of a perceived norm,” she said

But University of Utah leaders said even if they wanted to keep some of the learning options from the pandemic in place — legally, they can’t.

During a recent back-to-school town hall, Dan Reed, senior vice president for academic affairs, said laws approved by the Utah Legislature limited their ability to offer students more options. He said the university is “mandated to have the majority” of its classes in person.

Stephens said professors for three of her classes will be posting notes and lectures online for everyone. However, she said she’s still expected to attend in person.

As she heads back to school, she said she wishes the campus community has learned something over the past year and a half.

“I’m hoping that what we’ve all gone through as a society allows more compassion for others,” she said. “I’m hoping that kind of mentality carries through to this year, despite it being, ‘back to normal and back on campus.’”

Aside from that, it’s her final year in school. So she wants what any senior wants — to have a good time, make new friends and figure out what the heck to do with her life after she graduates.