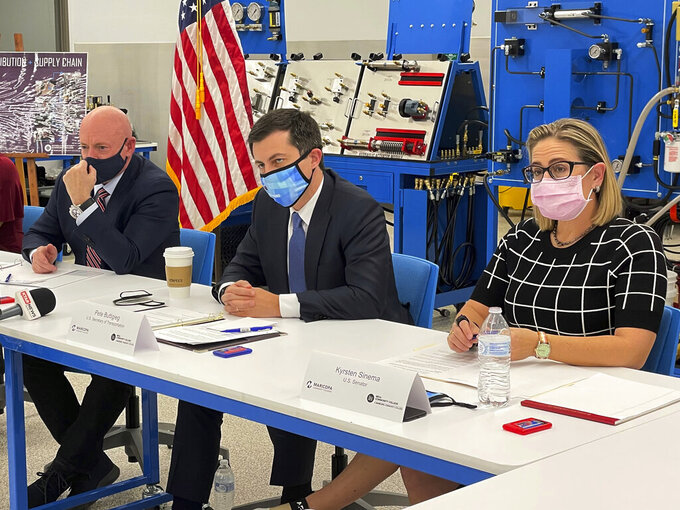 PHOENIX (AP) — U.S. Transportation Secretary Pete Buttigieg was in Phoenix Friday to tout the recently passed infrastructure bill in a state that will be crucial in determining control of the U.S. Senate.

Buttigieg appeared at events throughout the day with Democratic Sens. Mark Kelly and Kyrsten Sinema to promote the bipartisan infrastructure bill, for which Sinema was a lead negotiator, and the federal government's efforts to improve supply chain bottlenecks.

President Joe Biden and his administration have spent the week promoting the $1 trillion infrastructure bill that Biden signed Monday, which many Democrats hope will boost the president's lagging approval rating.

Buttigieg called it “the most transformational investment in infrastructure in generations."

Buttigieg also announced a $158 million grant to pay for a 1.6-mile (2.6 km) northwest extension of the Phoenix light rail system. The money comes from a separate pot of money already approved before the measure signed this week.

From the new bill, Arizona is expected to automatically receive at least $7.9 billion, most of it for highway projects, according to the Joint Legislative Budget Committee, the Legislature's nonpartisan budget arm. It also includes money for bridge improvement and replacement, airport improvements and public transit, including the Phoenix light rail and potential funding for Amtrak service between Phoenix and Tucson.

It also includes $100 million for the expansion of broadband internet to new areas and to provide $30 vouchers to help people with low incomes afford an internet connection. Water infrastructure, electric vehicle charging stations, wildfire prevention and cybersecurity also get money.

Local governments also can apply for grants that would bring significantly more money to the state.