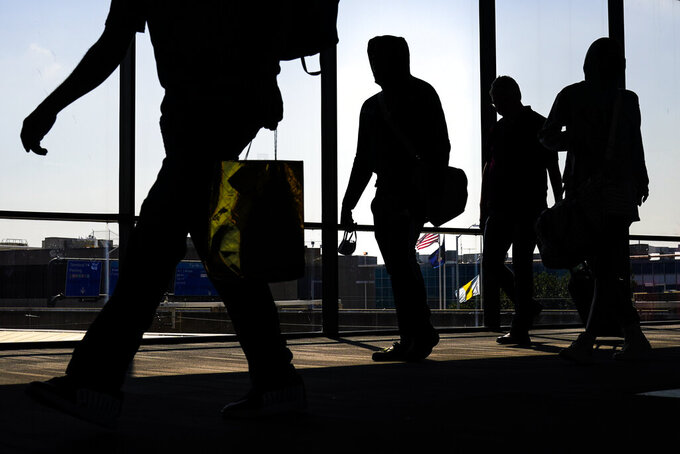 Matt Rourke, ASSOCIATED PRESS
File - Arriving passengers move toward the baggage claim area at Philadelphia International Airport in Philadelphia on Friday, July 1, 2022. Travelers will probably pay more for airline tickets or a hotel room around the holidays than they did over last Thanksgiving or Christmas. (AP Photo/Matt Rourke, File)

People still looking to book trips home to visit family or take a vacation during the holidays need to act fast and prepare for sticker shock.

Airline executives say that based on bookings, they expect huge demand for flights over Thanksgiving, Christmas and New Year's. Travel experts say the best deals for airfares and hotels are already gone.

On social media, plenty of travelers think they are being gouged. It's an understandable sentiment when government data shows that airfares in October were up 43% from a year earlier, and U.S. airlines reported a combined profit of more than $2.4 billion in the third quarter.

Part of the reason for high fares is that airlines are still operating fewer flights than in 2019 even though passenger numbers are nearly back to pre-pandemic levels.

“Fewer flights and more people looking to head home or take vacation for the holidays means two things: Prices will be higher, and we will see flights sell out for both holidays,” says Holly Berg, chief economist for travel-data provider Hopper.

Yulia Parr knows exactly what Berg is talking about. The Annandale, Virginia, woman struggled to find a reasonably priced flight home for her young son, who is spending Thanksgiving with his grandmother in Texas while Parr visits her husband, who is on active military duty in California. She finally found a $250 one-way ticket on Southwest, but it's not until the Tuesday after the holiday.

Parr figures she waited too long to book a flight.

“My husband's kids are flying home for Christmas,” she said. “Those tickets were bought long ago, so they're not too bad.”

Prices for air travel and lodging usually rise heading into the holidays, and it happened earlier this year. That is leading some travelers in Europe to book shorter trips, according to Axel Hefer, CEO of Germany-based hotel-search company Trivago.

“Hotel prices are up absolutely everywhere,” he said. "If you have the same budget or even a lower budget through inflation, and you still want to travel, you just cut out a day.”

Hotels are struggling with labor shortages, another cause of higher prices. Glenn Fogel, CEO of Booking Holdings, which owns travel-search sites including Priceline and Kayak, says one hotelier told him he can't fill all his rooms because he doesn’t have enough staff.

Rates for car rentals aren’t as crazy as they were during much of 2021, when some popular locations ran out of vehicles. Still, the availability of vehicles is tight because the cost of new cars has prevented rental companies from fully rebuilding fleets that they culled early in the pandemic.

U.S. consumers are facing the highest inflation in 40 years, and there is growing concern about a potential recession. That isn't showing up in travel numbers, however.

The number of travelers going through airport checkpoints has recovered to nearly 95% of 2019 traffic, according to Transportation Security Administration figures for October. Travel industry officials say holiday travel might top pre-pandemic levels.

Airlines haven't always done a good job handling the big crowds, even though they have been hiring workers to replace those who left after COVID-19 hit. The rates of canceled and delayed flights rose above pre-pandemic levels this summer, causing airlines to slow down plans to add more flights.

U.S. airlines operated only 84% as many U.S. flights as they did in October 2019, and plan about the same percentage in December, according to travel-data firm Cirium. On average, airlines are using bigger planes with more seats this year, which partly offsets the reduction in flights.

“We are definitely seeing a lot of strength for the holidays,” Andrew Nocella, United Airlines’ chief commercial officer, said on the company’s earnings call in October. “We’re approaching the Thanksgiving timeframe, and our bookings are incredibly strong.”

Airline executives and Transportation Secretary Pete Buttigieg blamed each other for widespread flight problems over the summer. Airline CEOs say that after hiring more pilots and other workers, they are prepared for the holiday mob.

Travel experts offer tips for saving money and avoiding getting stranded by a canceled flight, although the advice hasn't changed much from previous years.

Be flexible about dates and even destinations, although that's not possible when visiting grandma's house. In a recent search, the cheapest flights from Los Angeles to New York around Christmas were on Christmas Eve and returning New Year's Eve.

Look into discount airlines and alternate airports, but know that smaller airlines have fewer options for rebooking passengers after a flight is canceled.

Fly early in the day to lower your risk of a delay or cancellation. “If something goes wrong, it tends to progress throughout the day — it gets to be a domino effect,” says Chuck Thackston, general manager of Airlines Reporting Corp., an intermediary between airlines and travel agents.

There are plenty of theories on the best day of the week to book travel. Thackston says it's Sunday because airlines know that's when many price-conscious consumers are shopping, and carriers tailor offerings for them.

For the most part, airlines have dodged the accusations of price-gouging that have swirled around oil companies -- which drew another rebuke this week from President Joe Biden -- and other industries.

Accountable US, an advocacy group critical of corporations, linked airline delays and cancellations this summer to job cuts during the pandemic and poor treatment of workers. “But generally, we would say the airline industry is not currently at the same level as big food, oil or retail in terms of gross profiteering,” says Jeremy Funk, a spokesman for the group.

Brett Snyder, who runs a travel agency and writes the “Cranky Flier” blog about air travel, says prices are high simply because flights are down from 2019 while demand is booming.

“How is it gouging?” Snyder asks. “They don’t want to go (take off) with empty seats, but they also don’t want to sell everything for a dollar. It’s basic economics.”

Travelers are sacrificing to hold down the cost of their trips.

Sheena Hale and her daughter, Krysta Pyle, woke up at 3 a.m. and left their northwestern Indiana home an hour later to make a 6:25 a.m. flight in Chicago last week.

“We are exhausted,” Hale said after the plane landed in Dallas, where Krysta was taking part in a cheer competition. “We started early because the early flights were much cheaper. Flights are way too expensive.”

They're not going anywhere for Christmas.

“We don't have to travel. We're staying home with family,” Hale said.

David Koenig can be reached at www.twitter.com/airlinewriter