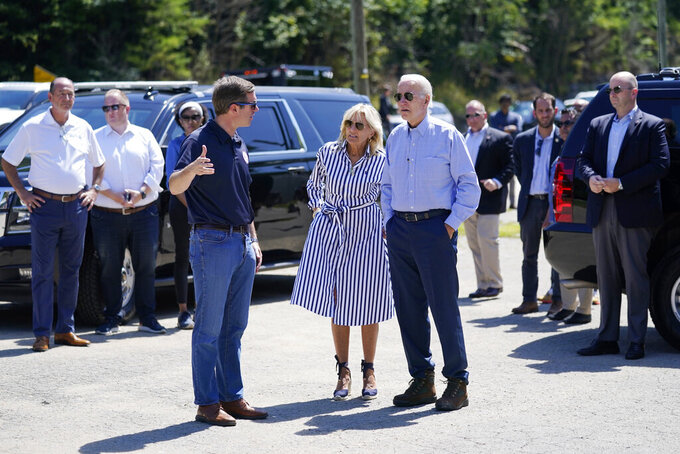 LOUISVILLE, Ky. (AP) — Gov. Andy Beshear pointed to signs of progress Thursday as federal emergency personnel respond to requests for assistance in flood-ravaged eastern Kentucky, but stressed it's “still not enough” as people work to recover from the disaster that swept away homes and inundated communities.

A week ago, the Democratic governor berated the Federal Emergency Management Agency's response, just days after President Joe Biden visited the stricken Appalachian region and declared the federal government would provide support until residents were back on their feet. The catastrophic flooding caused at least 39 deaths. Two women in the region are still missing.

Beshear was more upbeat Thursday in his updated assessment of FEMA's response, while stressing that the state is closely monitoring the agency's handling of relief requests.

Since flash flooding engulfed parts of eastern Kentucky late last month, FEMA has approved more than $40 million in grants for 5,267 households under its Individuals and Households Program, the governor said. About half the total requests for the assistance have been approved so far, up from the “30-something percent” figure he saw initially, he said.

“Still not enough, but it is progress," Beshear said at a news conference. "And when our federal partners, even if we’re frustrated sometimes, are making real progress, we want to say thank you, while also continuing to push FEMA to help out our families.”

That money distributed by FEMA includes more than $32 million in housing assistance grants to help people restore their homes to “sanitary and habitable conditions,” Beshear said. Another $8 million has gone to help people meet other immediate needs, such as medical and dental expenses, moving and storage costs and child care, he said.

Of more than 10,000 applications for the assistance, 1,502 are deemed ineligible at this point, FEMA said Thursday. It said the reasons can include when FEMA aid would duplicate benefits from other sources, including insurance. Other reasons can include issues with verifying the applicant’s identity or homeowner status or other missing documents.

A denial of assistance isn't “necessarily the end of the road” in seeking relief, FEMA has said. Agency personnel are reaching out to people being denied to review their applications.

Beshear on Thursday urged people in those situations to “keep pushing" and to meet with FEMA officials “eye to eye” to do a thorough review. The agency also is texting people who haven’t responded to calls as another means to reach out, the governor said.

He praised those efforts, saying: "It’s got to happen, because our people are depending on it.”

The governor said there are a lot of “moving pieces” regarding the government relief effort.

“We’re going to try to further drill down on the different buckets," the governor said. "How many are pending, how many have been denied, how many have been denied and then later approved, what are the reasons. But we are getting more transparency and more numbers. It will help us to be good advocates. ... And it will help families to know the additional work they need to do.”

Kentucky leaders, meanwhile, are crafting a state relief package for the flood-stricken region. Beshear said he's “getting closer” to calling a special legislative session to take up the legislation.

“We've got to have agreement up front on all the pieces to it,” the governor said. “That is going well. I hope in the next day or so we can get a firm date on it.”

Meanwhile, more than 450 people left homeless by the flood are being housed in state parks, churches, schools and community centers, Beshear said. Of that total, 319 are staying at state parks.

In urging people to reach out if they need the support, the governor said: “It is OK to not be OK. I don't know how anybody can be OK if they've lost everything and/or lost a loved one.”