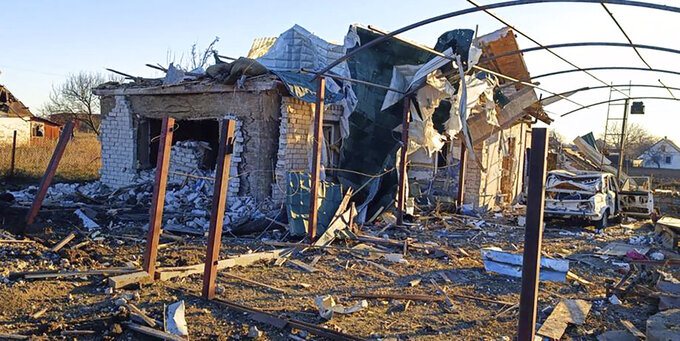 Uncredited, ASSOCIATED PRESS
In this photo provided by the Zaporizhzhia region military administration, a damaged building and a car are seen after a Russian strike in the village of Novosofiivka, in the Zaporizhzhia region, Ukraine, Monday, Dec. 5, 2022. Ukrainian officials reported a new barrage of Russian missile strikes across the country Monday, an attack that was anticipated as Russia seeks to disable Ukraine's energy supplies and infrastructure with the approach of winter. (Zaporizhzhia region military administration via AP)

THE HAGUE, Netherlands (AP) — The chief prosecutor of the International Criminal Court on Monday denounced a European Union proposal to create an U.N.-backed special tribunal to prosecute crimes in Ukraine, saying his court was capable of effectively dealing with war crimes committed there.

The Hague-based ICC has launched an investigation into war crimes in Ukraine but cannot prosecute the crime of aggression — the act of invading another country — because the Russian Federation is not a signatory to the Rome Statute, the treaty that created the court.

In her announcement, von der Leyen said it was essential to get approval from the United Nations to avoid issues of immunity. Heads of state, such as Russian President Vladimir Putin, are generally considered immune from prosecution while they are in office.

Von der Leyen said the EU would work with international partners to get “the broadest international support possible” for the tribunal, while continuing to support the ICC.

Khan has acknowledged that the ICC would be unable to prosecute Putin for the crime of aggression, but high-ranking figures could be tried for war crimes or genocide. “We should avoid fragmentation, and instead work on consolidation,” Khan said in an address to the Assembly of States Parties, the annual meeting of the ICC’s oversight body.

Since Russian President Vladimir Putin ordered the invasion of Ukraine on Feb. 24, his military forces have been accused of abuses ranging from killings in the Kyiv suburb of Bucha to deadly attacks on civilian facilities, including the March 16 bombing of a theater in Mariupol that an Associated Press investigation established likely killed close to 600 people.