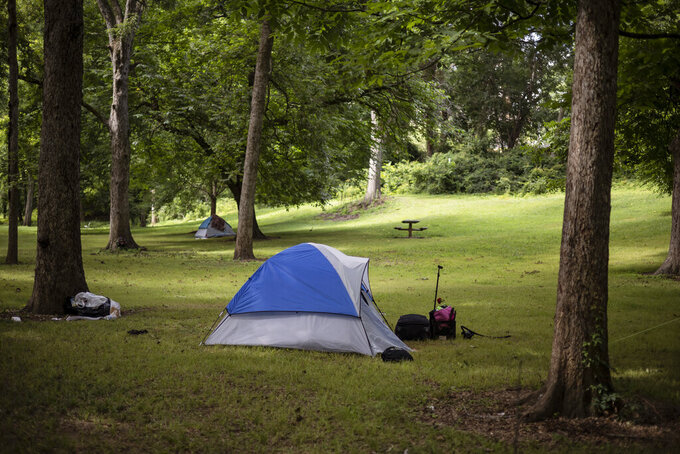 She and her fiance, Clint Marable, would use the facility’s looming structure to shield them from torrents of water.

“We were just looking for somewhere warm out of the rain,” Gamble, 47, recalled.

Gamble and Marable, 38, met in Athens several years ago after differing circumstances left them both without permanent housing. They bounced around Georgia, and from job to job, living in motels and sometimes on the streets.

But last month, they returned to Athens, where they said resources were available for the homeless and they were more familiar with the area. That same month, Athens-Clarke County commissioners passed a resolution to address homelessness.

The facility the couple once slept at is now one of many locations being considered by the commission for a new, government-sanctioned homeless camp as part of this resolution.

Gamble and Marable are just two of many facing homelessness in Athens. In 2020, Athens-Clarke County counted 210 homeless individuals in the city, according to an annual Point-In-Time count to document homelessness. The numbers represent a rough estimate with those living in doubled-up housing, or couch surfing, not included in the count.

Darius Willoughby said he first experienced homelessness after separating from his now ex-wife over a year ago. He said he eventually moved back with his mother because he was unable to sustain housing alone before what he called his own bad decisions pushed her to drop him off at a community shelter.

“My mother brought me over here to Bigger Vision,” Willoughby, 39, said. “A lot of new people get dropped off here.”

The shelter on North Avenue sits between two of the larger encampments in Athens. In North Oconee River Park, a small community, called “New Tent City” by some, stays in proximity to the shelter in hopes of getting in for the night.

“It’s like a little community,” Willoughby said. “This is how I see it — we’re all family. We all try to help each other in the way we can.”

Willoughby, who has a learning disability and battles bouts of depression, said he has been fortunate in more recent months to find temporary housing by living with a friend. But a new facility could provide a transitionary home for the homeless, he said.

“I would like the facility because with rainy days we might also be able to come in and get out the rain,” Willoughby said, adding resources to help people get on their feet would be most important.

Bobby Smith, 67, shared similar sentiments. Smith, a longtime Athenian, said he was pushed to homelessness as prices for housing soared after retiring. Smith is one of many who have set up tents in North Oconee River Park.

“It’s not like I want to be here,” he said. “But my money situation doesn’t fit in the category of $1,800 rent ... it got me in a situation where I can’t afford to get it. You have to have a certain amount of money.”

Smith said between his Social Security and the money he gets for disability, he brings in under $800 a month. He said a new facility could help him and others who have been homeless for years as housing has become more unaffordable.

He said he also hopes any new facility in town would have kind and respectful people who looked to help those in need.

“They need to have somewhere for disabled people,” Smith said. “For people with Social Security who can’t get a place because we’re not making enough money.”

In interviews with the Banner-Herald, several people experiencing homelessness listed programs and resources such as job training during the day as important. Many said there are few places for the homeless to be during the day, leaving them out on the streets.

“I’d like to see in this new facility some transparency and a human element that understands people have things going on in their daily life,” said Michael Duggan, 35, who has been homeless for several years. “There should be people who work there who know forgiveness, know about second chances, and how to grant those.”

Those without housing in a separate, more stable encampment under the train tracks on Willow Street also face relocation in the near future.

“CSX received multiple complaints about a homeless camp on our property at Willow Street from local landowners,” said Sheriee Bowman, a spokesperson for CSX Transportation. “We have been in contact with Athens-Clarke County police about the complaints in an effort to find a solution that would direct the occupants to safer living conditions.”

But many said a new facility could help the occupants safely relocate, while also helping those in other encampments who are left out at night when they are unable to get a bed at a shelter.

Gamble and Marable have faced the daily challenge of securing one of the 35 beds in Bigger Vision. With one phone between the two of them, they are left to call one at a time to reserve a bed, they said, losing crucial time in a rush to get in the nearest shelter for many.

On some nights, Marable ensures Gamble is able to get in while he sleeps outside. On other nights, they are both forced to sleep in the woods off Jefferson Road, choosing to stay away from larger encampments because of the possible dangers.

Marable said when they are unable to get in a shelter they start their days in a tent. Upon waking up, they take makeshift showers using body wash and water bottles.

“I hate washing up in the woods because anybody could be watching you,” she said, adding Marable stands guard for her. “But there is nowhere to go to wash up ... that’s kind of scary being a female.”

During the day, they go to the library to continue job searches and find respite from the sun, Gamble said. For transportation, they use the bus with rides currently free.

But she said she hopes a new facility could help provide a bed for the many who are still without permanent housing, including many single women. Like many, she said a facility that has programming during the day would be important, and somewhere for people to lock up their belongings while heading out to job interviews.

“Training or computers where we could look for jobs would be good,” Gamble said. “Something where homeless people could learn a trade so they could have the tools to go look for a job because some of them don’t know how to read, count or stuff like that.”

Charles Hardy, president of Athens Alliance Coalition, an organization that has helped the homeless, can often be seen on Willow Street passing out tents and food. He said his organization got involved because he wanted to make a change.

“I just got tired of city officials sitting around not wanting to do nothing,” Hardy said, adding every day he sees a different person without housing, some from states far away.

Having boots on the ground in the community and directly helping the people is important, he said. This first-hand experience informed some of the discussions he held with city officials to pass a resolution to address homelessness.

“Who would you rather listen to: a person who sits behind the desk all day, or an organization who is out there in it and see it every day?” Hardy said.

Just what the facility or encampment will look like remains unclear, but the mayor and commission will discuss the location of the site on Tuesday.

Hardy, like others, said he hopes the facility will help to transition those without permanent housing into stable homes.

But while Marable and Gamble join others in their hope for a new encampment, they are still working hard to see their situation change. Marable said he recently was able to secure a job interview at a Wendy’s in town, though he shared concern the pay may still not be enough to secure permanent housing.

“We just need the help,” Marable said, “because we’re really working and trying to get out of this.”