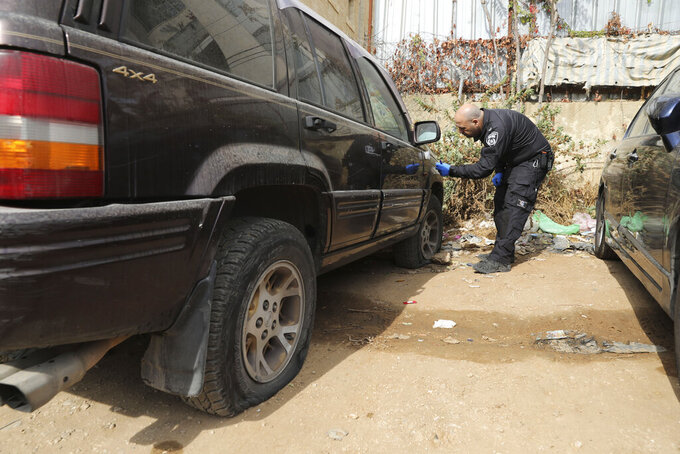 RAMALLAH, West Bank (AP) — Israeli soldiers on Friday went to return the remains of a Palestinian teenager who was killed in October while allegedly throwing firebombs in the occupied West Bank, only to be told by the family that it was the body of someone else.

The macabre mix-up, which the army called an “unfortunate mistake,” was likely to draw attention to Israel's controversial policy of holding the remains of Palestinians killed while allegedly carrying out attacks, something rights groups say amounts to collective punishment of bereaved families. Israel says it serves as a deterrent for future attacks.

Israel had planned to return the bodies of two Palestinians — Isra Khazimia and Amjad Abu Sultan — on “humanitarian grounds.” At the time of the alleged attacks, Khazimia was said to have had mental health issues while Abu Sultan was a minor.

But when they handed over the remains of Abu Sultan, his family informed the soldiers that it was the wrong body. The remains have not been publicly identified.

"Upon return of the body, it was revealed that the body was identified incorrectly. This unfortunate mistake is being reviewed by the relevant authorities," the military said in a statement. It apologized for the mistake and said the correct remains would be returned to the family on Saturday.

The Palestinian Civil Affairs Committee, which coordinates day-to-day activities with Israel, said it was Abu Sultan’s family who noticed the body was not their son's. The family could not immediately be reached for comment.

Abu Sultan, a teenager, was killed in October while attempting to throw firebombs at cars near an Israel settlement, the army said. Israeli police shot and killed Khazimia in September, when she allegedly tried to stab an officer in Jerusalem’s Old City. Her remains were returned as planned.

Israel says its policy of holding the remains of Palestinian attackers is needed to deter future attacks and for possible exchanges for the remains of two Israeli soldiers held by the Palestinian militant group Hamas in the Gaza Strip. Israel and its enemies have a long history of trading prisoners as well as the remains of those killed in armed conflict.

The Jerusalem Legal Aid and Human Rights Center, a Palestinian rights group, says Israel is holding the remains of around 80 Palestinians, many in secret cemeteries where their graves are marked by numbered plaques.

In a separate development, vandals slashed tires on nearly a dozen Palestinian-owned vehicles overnight in a tense Jerusalem neighborhood where Jewish settlers have been waging a decades-long legal battle to evict Palestinians, residents said Friday.

CCTV footage shows three hooded men entering a fenced-off area of Sheikh Jarrah before slashing tires of parked cars. It was unclear who was responsible, but recent weeks have seen an escalation in settler violence toward Palestinians in the occupied West Bank.

Israeli police say they are investigating the incident.

Protests and clashes over the threatened evictions helped spark the 11-day Gaza war in May. Two weeks ago, four Palestinian families from Sheikh Jarrah rejected a settlement floated by the Israeli Supreme Court that would delay their eviction for the next 15 years.

None of the 11 cars whose tires were deflated were owned by those Palestinian families, according to residents.

Sheikh Jarrah is in east Jerusalem, which Israel captured along with the West Bank and the Gaza Strip in the 1967 Mideast war. Israel annexed east Jerusalem in a move not recognized by most of the international community, and it considers the entire city its capital. It has portrayed the legal battle in Sheikh Jarrah as a local real-estate dispute.

The Palestinians want east Jerusalem to be the capital of a future state that includes the West Bank and Gaza, where Israel withdrew forces in 2005. They say the settlers, with backing from the state, are trying to drive them out of the city and change its identity.