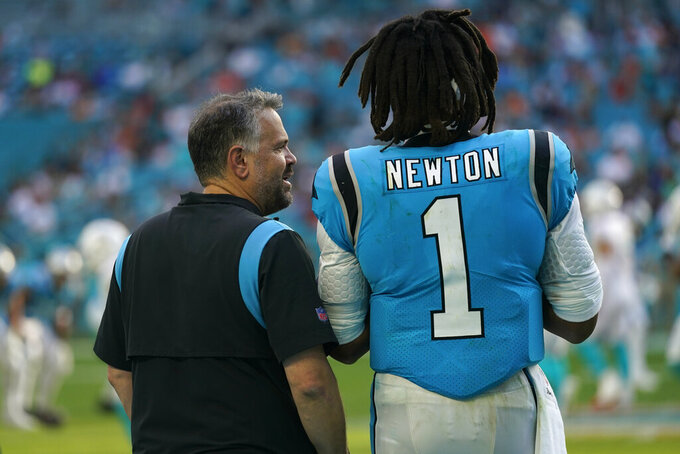 MIAMI GARDENS, Fla. (AP) — Cam Newton had just scored a rushing touchdown and was in a celebratory mood. He grabbed the football back from one of his teammates, headed over toward the stands and softly tossed it toward someone he spotted in the seats.

It bounced off about a half-dozen sets of hands.

Even in happy moments, accuracy was an issue for Newton on Sunday.

By the numbers, Newton played the worst game of his NFL life. He was 5 of 21 passing for 92 yards — 64 of those coming on one play — and finished with a career-worst 5.8 quarterback rating in Carolina’s 33-10 loss to the Miami Dolphins.

“This is the NFL. Nothing’s promised,” Newton said. “Just because Cam Newton’s on your roster doesn’t mean you’re just going to win. Just because it’s a feel-good story doesn’t mean you’re going to win. I’m well aware of that. I think in this situation we all have to come to grips with who we are and I’m putting blame on myself first before I can even look at somebody else. I have to be better. I know that.”

It was the 10th consecutive loss by the Panthers in games Newton starts, a drought that goes back to November 2018. They’ve lost seven of their past nine games overall, and the feel-good story of Newton returning to Carolina didn’t feel so good Sunday.

The Dolphins couldn’t even believe Newton’s numbers, when told postgame he was held to five completions.

“Damn,” said Miami cornerback Xavien Howard, who had one of the Dolphins’ three interceptions. “He was getting a little frustrated. I feel like our defense, we did that to him and we’ve got to feed off that. We’ve got to get every quarterback to feel like that.”

Newton had a pair of first-half interceptions, one of which led to a Miami touchdown, and the Panthers wound up getting into a 21-7 hole quickly.

Newton was 3 for 15 at halftime for 81 yards and went into the break with a quarterback rating of 10.0. There had been 238 instances this season of a quarterback throwing at least 15 passes by halftime; of those, the worst halftime rating before Sunday was a 17.8 by Sam Darnold — also of Carolina — against Minnesota on Oct. 17.

Things didn’t get any better from there. Newton got pulled with the game basically decided, since he still isn’t overly comfortable with the schemes the Panthers try to use in two-minute and comeback situations. PJ Walker came in and finished the game, going 5 for 10 passing for 87 yards.

Panthers coach Matt Rhule said he wasn’t making any snap judgments about the game until he reviews film, and stopped way short of putting the loss on Newton.

“I’m not making any changes or anything like that right now,” Rhule said. “At the end of the day we weren’t protecting the quarterback worthwhile at all. Didn’t seem fair to keep Cam in there and keep getting hit.”

Carolina allowed five sacks, gave up 111 rushing yards — the Panthers are now 0-7 when allowing more than 82 of those in a game this season — and managed only 10 first downs and 198 total yards. And the team that came into the week leading the NFL in penalties got flagged seven more times Sunday, many of them costly.

The Panthers now have their bye week. Newton said he’ll spend a lot of it studying.