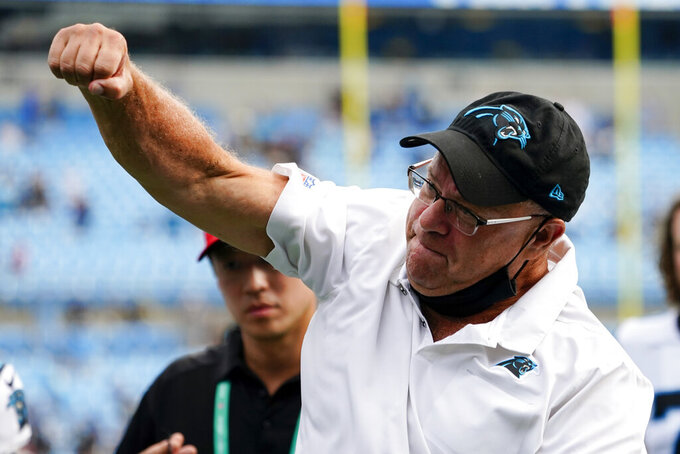 Those fast starts have allowed the Panthers to manage the game and new quarterback Sam Darnold to enjoy the comfort of playing with a lead.

But while those fast starts have been impressive, the Panthers have lacked that killer instinct.

They have struggled to maintain the momentum after halftime, with some offensive struggles, defensive lapses and special teams miscues providing opponents with an opportunity to get back in the game.

“In the second half offensively we just continue to kind of have that lull, especially when we have a lead,” Panthers coach Matt Rhule said. “We just have to learn how to be aggressive but still be smart. I thought at the end our guys on offense made the plays they had to make.”

Likewise, Panthers defensive end Brian Burns said the defense needs to maintain its intensity after halftime. Carolina has allowed 21 points in the second half this season.

But Burns said overall he's pleased with what he's seen from the league's No. 1 ranked defense, which is allowing just 190 yards per game.

“In all honesty, the defense had a very dominant performance for the second week in a row,” Burns said. “I’m proud of them for real. I’m just liking the energy. We’re all playing together and for each other and that’s why we’re so dominant right now.”

The Panthers are 2-0 for the first time since 2017, which is also the last time they made the playoffs.

Carolina's ability to run the football has opened up the play-action passing game and bootlegs for Darnold. With teams forced to focused on Christian McCaffrey's game-breaking ability, it has bought Darnold more time to set up in the pocket or roll out and find his receivers. It also has kept him from getting sacked repeatedly as he was with his former team, the Jets.

When McCaffrey is not in the game, the Panthers are a different team. He missed two series with leg cramping late in the third quarter and Carolina's offense looked out of sync, resulting in Darnold panicking and turning the ball over on a shovel pass.

McCaffrey has 59 touches in the first two games and that is a number that may not be sustainable moving forward. The problem is the Panthers aren't getting much help from their other running backs. Rookie Chuba Hubbard was held to 10 yards on eight carries on Sunday, and Royce Freeman allowed a sack when he failed to pick up a pass rusher in his only play lining up in the backfield.

The run defense has been lights out, limiting the Jets and Saints to a combined 93 yards rushing in two games. Saints star Alvin Kamara managed just 5 yards rushing on eight carries. The addition of free agent DaQuan Jones in the middle of the line and the steady development of last year's first-round draft pick Derrick Brown have been huge for Carolina.

The Panthers continue to struggle in the kicking game. Zane Gonzalez replaced Ryan Santoso on the roster last week and had a 51-yard field goal blocked and missed an extra point. He made two short field goals and converted two extra points. He's guaranteed a roster spot for at least two more weeks because he was signed off another team's practice squad. However, Gonzalez is far from a sure bet to stick around in Carolina. The lack of consistency at the kicker position could come back to haunt the Panthers at some point. Gonzalez also lacks leg strength on kickoffs.

Rhule said he expects McCaffrey to be fine and play Thursday night against Houston. ... The Panthers will be without left guard Pat Elflein (hamstring), which means Dennis Daley will likely get the start. ... Reserve defensive end Yetur Gross-Matos is dealing with an ankle injury, but the Panthers have some solid depth at that position.

10 — Number of sacks this season for the Panthers. Haason Reddick leads the way with three, while Burns has two.

The Panthers enter Thursday night’s game against Houston as a 7-point favorite, according to FanDuel SportsBook. The Texans could be without quarterback Tyrod Taylor, who is having an MRI on his hamstring after having to be replaced by rookie Davis Mills. The Texans will make Deshaun Watson inactive, so that is not an option.