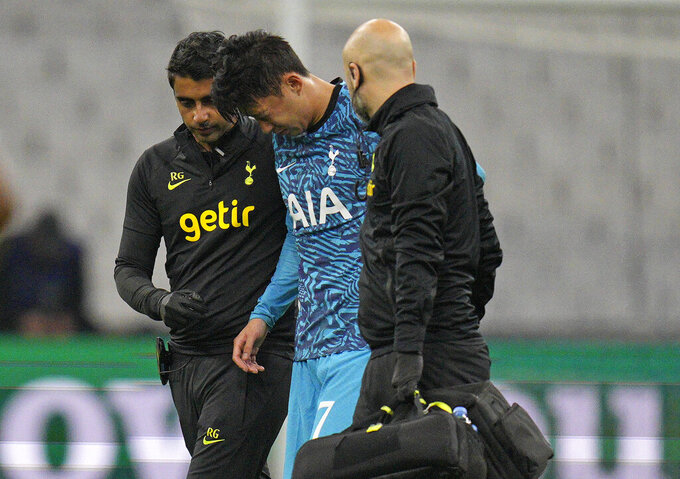 Daniel Cole, ASSOCIATED PRESS
FILE - Tottenham's Son Heung-min leaves the field injured during the Champions League Group D soccer match between Marseille and Tottenham Hotspur at the Stade Velodrome in Marseille, France, Tuesday, Nov. 1, 2022. When Son Heung-min went down clutching his face in Tottenham’s Champions League match with Marseille last week the pain was not confined to his fractured eye socket. The shockwaves were felt all the way back in his homeland South Korea as the nation feared the worst ahead of the World Cup. (AP Photo/Daniel Cole, File)

MANCHESTER, England (AP) — When Son Heung-min went down clutching his face in a recent Champions League match, the pain was not confined to the Tottenham striker's fractured eye socket.

The shockwaves were felt all the way back in his homeland of South Korea, where the nation collectively feared the worst ahead of the World Cup.

Son is his country’s Lionel Messi and Cristiano Ronaldo wrapped up into one. He is an immense source of national pride — having established himself as one of the leading soccer players in the world — and the greatest hope of success going into Qatar.

His injury in the match against Marseille was big news back home, with one publication describing it as “Korea’s big emergency.”

Tottenham later confirmed Son would require surgery, but no timeframe has been placed on his recovery. If he is to play any part in the World Cup, which starts on Nov. 20, it seems certain he will require a protective mask.

It's a cruel blow for a player who, at the age of 30, is at his peak going into the tournament.

Last season, Son shared the Premier League’s Golden Boot with Liverpool forward Mo Salah as the leading scorers. He has not been as prolific this season, but there have still been highlights, including a hat trick against Leicester in September and two goals against Eintracht Frankfurt.

Qatar was an opportunity for him to reach new heights.

Son is a player who is constantly setting new benchmarks — dating back to when he first headed to Europe to join Hamburg’s academy in Germany in 2008. Marcell Jansen is now the club’s president, but back then he was a teammate and watched the forward’s early steps.

“I was immediately impressed by his mentality and attitude,” Jansen told The Associated Press. “He would always work extra shifts with his father and therefore trained twice as much as everyone else did.”

There is a common theme when people talk about Son’s qualities. His strength of character and determination are often mentioned, but his game-changing talent is what has seen him establish himself as one of the best forwards in the sport.

His supreme balance, two-footedness, pace and finishing make him a complete attacking force that has complimented Harry Kane so effectively at Tottenham.

“I’ve rarely seen a player who shoots as well with his left foot as with his right, unbelievable,” Jansen said.

Jonas Boldt has made a career out of unearthing talent as a scout and sporting director for Bayer Leverkusen and now head of sport at Hamburg. He was at Leverkusen when the club signed Son from Hamburg for $8.7 million in 2013. At that point, the secret was out about the players’ talent in Germany, if not further afield.

“In terms of play, his strengths definitely lie in his short, quick movements and his finishing strength. These skills set him apart,” Boldt told the AP. “He was a talented footballer, without question. But his excellent mentality and his iron will are the attributes that made him even better at every level and made him this top player.

“Heung-min is a player who has proven himself time and again at a higher level and adapted. On top of that, with Tottenham he moved to a club that had a clear idea with him and a coach (Mauricio Pochettino) who didn’t pack him in cotton wool, but challenged him a lot. And here again Heung-min’s great character came into play.”

Son’s father, Woong-jung, is a former professional soccer player and has been a guiding force in his career. He would watch his son at training sessions when he moved to Germany.

While the elder Son has been instrumental, so, it seems, was his grounding in the German league, which has established itself as a rich developer of talent — most recently in the form of Erling Haaland at Borussia Dortmund before the Norwegian’s transfer to Manchester City.

Back in South Korea, Son’s celebrity is such that his endorsements range from banking to razors to instant noodles and cars. Every Tottenham game is screened live and an image of his face appears in the top corner to enable viewers to quickly determine if he is playing or not.

But that level of fame has not been replicated in England, despite Son being one of the Premier League's top players.

“For me, it’s perfectly clear: Heung-min is not a player who constantly seeks the limelight and attention,” Brandt said. “If you look at the award ceremonies nowadays, such as the Golden Boot, the players’ self-marketing comes into play and plays a role. Maybe Heung-min doesn’t attach that much importance to it, seems a bit more shy.”

South Korean fans will be desperate to see that image of Son’s face in the corner of their television screens during the World Cup. But even if injury means he is unable to produce his best in Qatar, Jansen is convinced there is much more to come from him.

“The World Cup is a great stage for Sonny to represent himself and his country,” Jansen said. “But regardless of the World Cup, I’m sure that Sonny will have a career as long as Messi or Ronaldo because he’s such an incredibly fit player who lives for the sport.

“I expect him to go down in history as one of the greatest footballers from his country.”