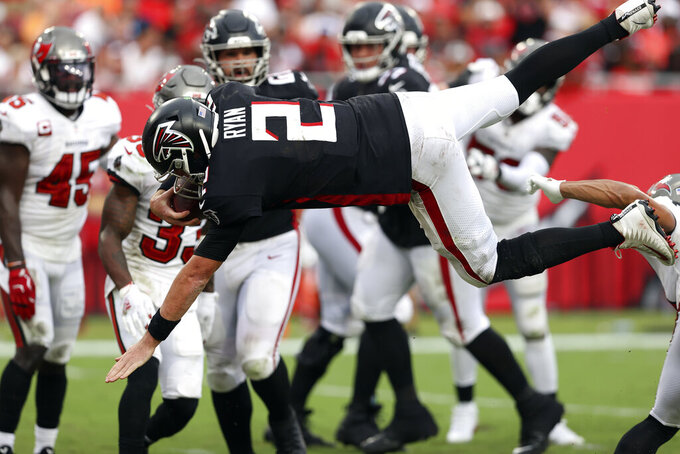 TAMPA, Fla. (AP) — The Atlanta Falcons found themselves down by three in the fourth quarter with a real chance for a potential upset of the Super Bowl champion Tampa Bay Buccaneers.

Those hopes were dashed in a disastrous finish that saw the Bucs score 20 points during the final quarter en route to a 48-25 win over Atlanta on Sunday.

"Everybody feels sick when you see that box score, but there were some positives,” Falcons first-year coach Arthur Smith said.

Coming off a 32-6 drubbing to the Philadelphia Eagles in the season opener a week ago, Atlanta (0-2) rallied from an 18-point deficit.

Matt Ryan threw TD passes to Calvin Ridley and Cordarrelle Patterson before running for a 2-point conversion to make it 28-25 with 1:34 left in the third quarter.

The Falcons got the ball back at their 4 with 13 minutes to go, a chance for a long go-ahead drive. Instead they failed to convert on a third-and-inches at the 13. After a 33-yard punt, it took three plays before Tom Brady hooked up on an 8-yard pass to Chris Godwin and the Bucs' advantage was 10.

“Got it to a three-point game, and we had some momentum, really did,” Ryan said. “Credit to them, they changed the tide. They did a good job in the fourth quarter putting us away.”

Tampa Bay sealed the deal with a pair of interception returns for touchdowns by Mike Edwards.

“This is a message for our guys, our young guys,” Ryan said. “It could be frustrating, but it’s a wasted opportunity if we don't learn from it and we don’t correct it. Experience is great for everyone.”

Ryan was 35 for 46 for 300 yards, with two touchdowns and three interceptions.

Brady threw for 276 yards and five touchdowns, but Atlanta got good pressure at times on the seven-time Super Bowl champion and finished with three sacks.

The Falcons will look to end a seven-game skid at the New York Giants next Sunday.

Three of those losses came against the Bucs (2-0), who’ve outscored their NFC South rivals 124-62 over the past 10 quarters of those outings.