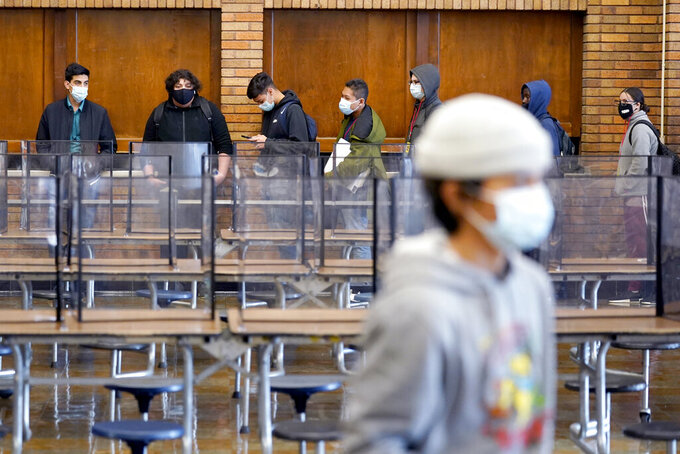 The state Supreme Court heard arguments from attorneys on a law enacted in March that requires district courts to rule within 10 days when someone sues over a county restriction. Three of the seven justices expressed skepticism during a Zoom hearing that the law is constitutional.

But the court is considering an appeal in a case involving a lawsuit against a mask mandate imposed last year by a school district in Johnson County, the state's most populous county. And school districts aren't covered by the law that applies to counties — and a separate one mandating the same expedited legal process in lawsuits against school districts expired in June.

Kansas courts generally don't rule when there's not a live case involving parties needing a legal question resolved. Nevertheless, in July, a Johnson County judge handling the lawsuit against the school district struck down the law applying to county restrictions. He concluded that it denied counties their right to due legal process and interfered with the courts' power to handle their own business.

Supreme Court justices first must decide whether the case should have been dead before it reached them, then whether the law applying to county COVID-19 restrictions violates the Kansas Constitution. If it says yes to the first question, district courts still will have to rule quickly on lawsuits against counties.

“Do we look at it as an abuse of discretion that the (district) court made this pivot?” Justice Dan Biles asked during the hearing.

The Supreme Court did not say when it would issue a decision. It declined in August to put the law applying to counties on hold temporarily while considering the case involving the school district.

Both the law applying to counties and the earlier law applying to school districts arose from the Republican-controlled Legislature's opposition to Democratic Gov. Laura Kelly's response to the coronavirus pandemic and later, local restrictions. Lawmakers rewrote the state's emergency management laws several times.

Attorney General Derek Schmidt, a Republican running for governor, has argued that Johnson County District Judge David Hauber never should have ruled on the constitutionality of the law applying to counties. The case before him — and now before the Supreme Court — involved parents upset with a mask mandate imposed last year by the Shawnee Mission school district in the Kansas City area.

But Greg Goheen, an attorney for the Shawnee Mission school district, argued that the lower-court judge didn't abuse his authority because counties can impose mask mandates that apply to schools. Counties still face a “very unworkable” deadline for settling legal challenges to COVID-19 restrictions, he said.

"And I think the (lower) court has the ability to raise that issue," Goheen said.

The law says that if a judge doesn't rule on a lawsuit over county restrictions within 10 days, the people challenging them prevail automatically. Chief Justice Marla Luckert suggested the provision is a “pretty heavy enforcement measure.”

Luckert added, “Isn't there some right to have a day in court?”

But Laue argued that the Legislature has “a great deal of authority” in dictating how the state manages emergencies like the coronavirus pandemic.