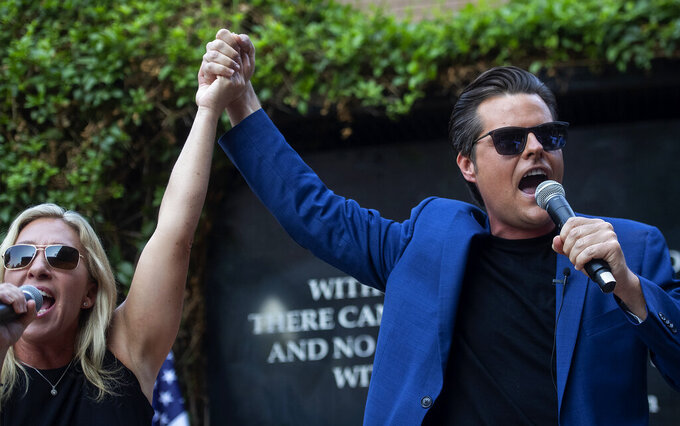 Cindy Yamanaka, ASSOCIATED PRESS
Republican Reps. Marjorie Taylor Greene and Matt Gaetz make an appearance at a rally Saturday, July 17, 2021, in Riverside, Calif. The two held a protest after a third venue in California canceled their event. Instead, they held a protest outside City Hall in Riverside, where one of the events was canceled. An Anaheim spokesman had announced the latest cancellation hours before the rally was scheduled to begin. (Cindy Yamanaka/The Orange County Register via AP)

ORLANDO, Fla. (AP) — Joel Greenberg, the friend of U.S. Rep. Matt Gaetz who pleaded guilty earlier this year to identity theft and other charges, accessed a restricted state database through his position as a local tax collector in Florida to look up information about hundreds of people, officials said.

Greenberg looked up information on almost 300 people, using the Driver and Vehicle Information Database, known as DAVID, according to the Seminole County Tax Collector's Office, located in a suburb of Orlando, Florida.

“We’re still working on determining the people searched,” Alan Byrd, a spokesperson for the Tax Collector’s Office, told the Orlando Sentinel this week. “This was an activity by the former tax collector that was not condoned by the DAVID system, and we are working to make sure that this sort of activity does not happen again.”

The DAVID system is used by police officers and deputies to quickly access a person’s information, including Social Security number, date of birth, addresses, signatures, and medical and disability information.

Greenberg and his employees had access to the DAVID system because residents obtain motor vehicle licenses through the county’s Tax Collector’s offices.

“I’m not surprised for one single moment,” said Seminole Commissioner Jay Zembower. “But it causes me great concern for those individuals, who for whatever purpose or reason, he was asking for their personal information.”

Officials in the Seminole County Tax Collector's Office say they only learned about Greenberg's searches after receiving a public records request from the Florida Center for Government Accountability, a government watchdog group, about the former tax collector’s use of the DAVID system.

However, Byrd said that some of Greenberg’s searches could have been legitimate, such as someone asking him to see if their driver’s license was still valid. Greenberg took office in early 2017 and resigned after his arrest in June 2020.

Greenberg pleaded guilty last May to six federal crimes, including sex trafficking of a child, identity theft, stalking, wire fraud and conspiracy to bribe a public official. He originally had faced 33 federal charges, but prosecutors dropped the other 27 counts filed against him. His plea agreement with prosecutors requires continued cooperation with an ongoing probe into sex trafficking.

Gaetz, a Republican who represents much of the Florida Panhandle, was not mentioned in Greenberg’s plea agreement. But Greenberg’s cooperation could play a role in an ongoing investigation into Gaetz’s supposed pay-for-sex relationship with a 17-year-old girl.

Gaetz, a close ally of former President Donald Trump, has denied any allegations of wrongdoing and has said repeatedly he will not resign from Congress. No charges have been brought against Gaetz.

Greenberg has been linked to a number of other Florida politicians and their associates. So far, none of them have been implicated by name in the sex trafficking probe.