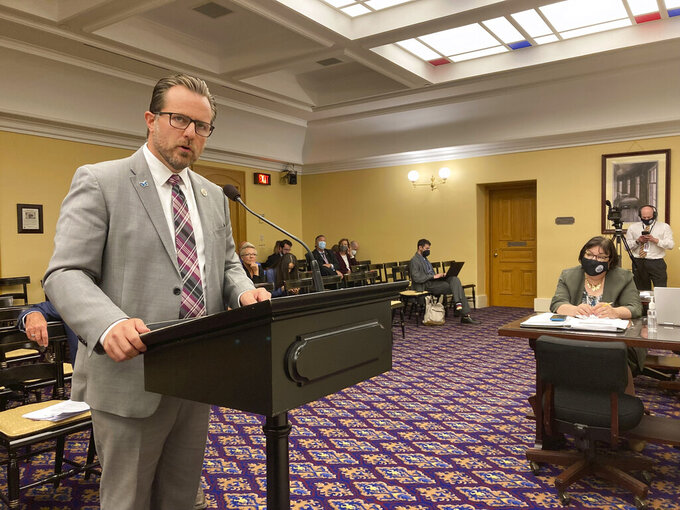 Andrew Welsh-Huggins, ASSOCIATED PRESS
Rep. Rick Carfagna, a Delaware Republican, discusses newly introduced legislation that would provide three exemptions for employees from being required to receive a coronavirus vaccine, including showing proof of natural antibodies from COVID-19, on Tuesday, Sept. 28, 2021, in Columbus, Ohio. The other exemptions are for employees who can show evidence of negative medical reactions to the vaccine, and reasons of conscience including religious convictions. (AP Photo/Andrew Welsh-Huggins)

COLUMBUS, Ohio (AP) — Public and private sector employees could seek exemptions from employer-mandated coronavirus vaccines in three general areas, including an ability to demonstrate the presence of COVID-19 antibodies, under a newly introduced Republican bill in the Ohio House.

The bill is meant to replace a previous anti-vaccination bill that included a ban on employers requiring vaccines of any kind, including for diseases such as the flu.

Employees who could show proof they run the risk of a negative medical reaction, and those who don't want the vaccine for reasons of conscience, including religious convictions, would also be exempt from employer mandates, under the legislation co-sponsored by GOP Reps. Rick Carfagna of Delaware and Bill Seitz of Cincinnati. Both said they are vaccinated.

The exemptions would also be available for employees and students at Ohio’s public and private schools, colleges and universities. The legislation also prevents governments from requiring proof of vaccination to enter locally or state-owned public facilities, which would include publicly funded sports stadiums.

The legislation does not prevent private businesses from requiring vaccination proof.

The bill isn't universal in allowing the exceptions to COVID-19 vaccine mandates. For example, employees of children's hospitals, employees who work on a hospital intensive care or critical care unit, and employees who start work after the proposed legislation takes effect would not be able to claim the exemptions.

Employees would not be responsible for costs imposed by employers for alternative methods to prevent the spread of the coronavirus, such as masking or testing, according to the bill. Employees would have to cover the cost of proving they already have a natural immunity to the coronavirus.

Rep. Allison Russo, a Democrat from Upper Arlington in suburban Columbus, questioned why other health care workers, such as those working in nursing homes, weren't also prevented from claiming the exemptions. Seitz said many nursing homes are already facing severe staffing shortages and there was a concern about making that shortage worse by those employees being required to get the vaccine.

Even if lawmakers approve the bill swiftly, it's unlikely the legislation would take effect this year. The GOP-controlled House Health Committee passed the bill Tuesday afternoon along partisan lines, and full House approval was expected Wednesday. But the measure still needs to move through the Senate and even if approved there within days and then signed into law by Gov. Mike DeWine, it wouldn't take effect for three months.

The previous legislation would have prevented employees from being fired as a result of refusing to get vaccinated and would allow them to sue their employers if they felt they had been wrongly dismissed.

Debate over the prior legislation achieved national notoriety in June when a doctor testified before the committee that people have become magnetized by the vaccine, allowing metal to stick to their skin. That has not happened.

The federal Centers for Disease Control and Prevention issued a bulletin June 3 specifically debunking this falsehood, explaining that all COVID-19 vaccines are free from metals.

Backers of that previous legislation, including bill sponsor Rep. Jennifer Gross, say vaccinations should be a personal choice. Gross has since been removed from the House Health Committee.

Opponents of the earlier bill included hospitals, state associations of doctors and nurses, and other health care groups that say the measure could reverse decades of protection against preventable diseases such as measles, mumps, hepatitis, meningitis and tuberculosis. Both the Ohio Manufacturers' Association and the Ohio Chamber of Commerce are also opposed.

___ This story was first published on September 28, 2021. It was updated on September 29, 2021, to correct the name of a representative to Allison Russo, instead of Jennifer Russo.