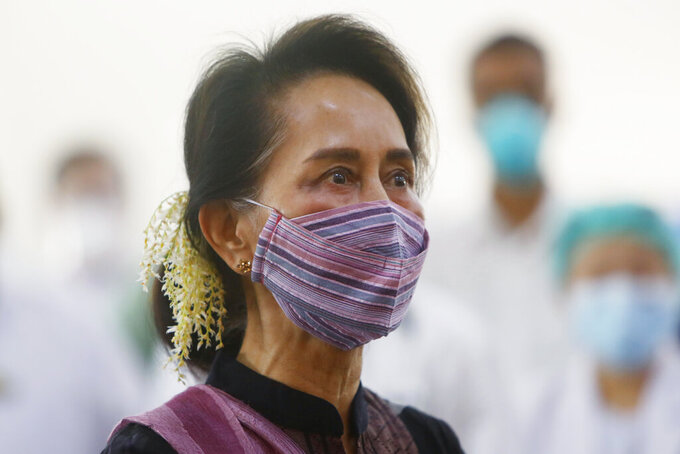 Aung Shine Oo, ASSOCIATED PRESS
FILE - In this Jan. 27, 2021, file photo, Myanmar leader Aung San Suu Kyi watches the vaccination of health workers at a hospital in Naypyitaw, Myanmar. Myanmar’s detained former leader, Suu Kyi, was unable to attend a scheduled court hearing Monday, Sept. 13, 2021, because she felt ill, her lawyers said. She is being tried in the capital Naypyitaw on charges of sedition - defined as spreading information that could cause public alarm or unrest - as well as two counts of flouting COVID-19 pandemic restrictions during the 2020 election campaign. (AP Photo/Aung Shine Oo, File)

Suu Kyi is being tried in the capital Naypyitaw on charges of sedition — defined as spreading information that could cause public alarm or unrest — as well as two counts of flouting COVID-19 pandemic restrictions during the 2020 election campaign, illegally importing walkie-talkies that were for her bodyguards’ use and the unlicensed use of the radios.

She was detained on Feb. 1 when the army seized power from her elected government.

One of Suu Kyi’s lawyers, Min Min Soe, told The Associated Press the 76-year-old former leader felt sick Monday on the drive to the court from the secret location where she's being held by the ruling military government. Her team requested her hearing be postponed, and she was allowed to return to her living quarters.

Her special court hearing was to have been the first since July, when sessions were suspended as a measure against a serious nationwide coronavirus outbreak. Monday's session was supposed to cover the charges that Suu Kyi had violated the COVID-19 restrictions.

Another of her lawyers, Khin Maung Zaw, said all those involved in the court hearings were tested for COVID-19 on Sunday. Suu Kyi has been vaccinated against the virus.

“We met with Daw Aung San Suu Kyi at 9:30 a.m. today. As soon as she entered the room, we learned that she was not well. Her face was red, with a runny nose,” said Khin Maung Zaw, using the honorific “Daw,” a respectful term for women. “She said she was not well as soon as she sat down. She said she was dizzy because the car was bumping so much. So we asked the court to postpone today’s appointment.”

His colleague Min Min Soe said Suu Kyi looked as if she had lost some weight, but told them she had not been sick for the past two months.

The army has said it seized power because last November’s general election, which Suu Kyi’s National League for Democracy won in a landslide, was tainted by widespread fraud. Suu Kyi’s party has denied this, and independent election observers have said the allegation has not been substantiated.

Suu Kyi’s supporters as well as independent analysts say all of the charges are politically motivated and an attempt to discredit her and legitimize the military’s seizure of power.

The army takeover was met with massive popular resistance, which is continuing despite harsh measures by security forces to quash it.

Min Min Soe said Monday’s court session continued with testimony against Suu Kyi's co-defendant, Win Myint, the country’s former president who was also detained in the military takeover. She said a prosecution witness testified on the charge that Win Myint also had broken COVID-19 pandemic restrictions during the 2020 election campaign.

Further proceedings in the cases against both for breaking coronavirus restrictions were adjourned until Sept. 20, while those involving other charges will be continue Tuesday, said Suu Kyi's lawyers.