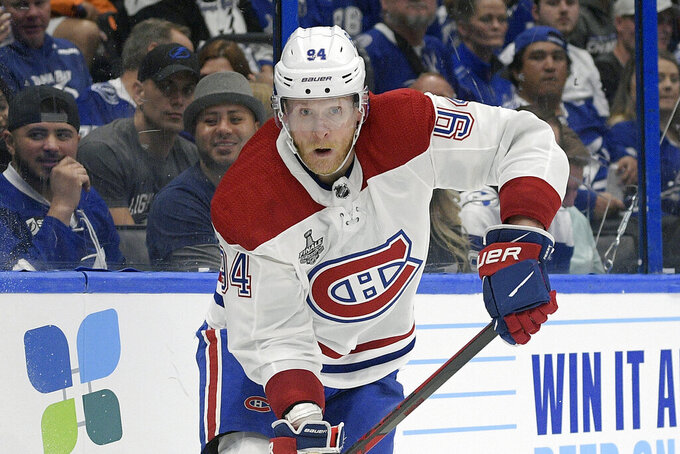 Phelan M. Ebenhack, ASSOCIATED PRESS
FILE - Montreal Canadiens right wing Corey Perry (94) controls a puck during the third period of Game 1 of the NHL hockey Stanley Cup finals series against the Tampa Bay Lightning in Tampa, Fla., in this Monday, June 28, 2021, file photo. Corey Perry has agreed to terms with the Tampa Bay Lightning on a two-year contract, according to a person with knowledge of the deal. The person spoke to The Associated Press on condition of anonymity Thursday, July 29, 2021, because it had not been announced. (AP Photo/Phelan M. Ebenhack, File)

Veteran forward Corey Perry signed a $2 million, two-year contract with the Tampa Bay Lightning on Thursday, replenishing some of the toughness they lost after winning the Stanley Cup back to back.

Perry faced the Lightning in the Stanley Cup Final in each of the past two seasons. He was with the Dallas Stars in 2020 and the Montreal Canadiens this year.

General manager Julien BriseBois said Perry “brings with him a wealth of big game experience.” Perry won the Cup with the Ducks in 2007 and has 108 goals in 167 NHL playoff games.

He's also a member of hockey's elite “Triple Gold” club of just 29 players who have won the Stanley Cup, an Olympic gold medal and a world championship gold medal. Perry has two Olympic gold medals after winning with Canada in 2010 and 2014.

Perry isn't producing the same as his younger days, like when he led the NHL with 50 assists in 2010-11, but he's aging like a fine wine and can still be a pest on the ice and a strong net-front presence.

“He will be an excellent addition to the lineup and we are thrilled to add another high-character player to our group who can contribute to the organization’s overall depth,” BriseBois said in a statement.

Perry has played 16 years in the NHL, the first 14 with Anaheim. He has 386 goals and 432 assists in 1,094 regular-season games with Anaheim, Dallas and Montreal.

He will count $1 million against the salary cap in each of the next two seasons, another bargain signing by the Lightning, who are expected to use the long-term injury exemption again like they did last season.

Perry brings more grit to the Lightning lineup after they lost Blake Coleman and Barclay Goodrow in free agency and Yanni Gourde in the expansion draft. Tampa Bay also got tougher with the additions of forward Pierre-Edouard Bellemare and defenseman Zach Bogosian on Wednesday.

The Lightning on Thursday also re-signed 22-year-old restricted defenseman Cal Foote to a $1.7 million, two-year contract. Foote made his NHL debut last season and put up three points in 35 games.

BriseBois said Wednesday he did not expect to make any other free agent additions unless “something falls onto our lap that makes sense and improves our team and we can find a way to squeeze it in.”

After squeezing in Perry and re-signing Foote, the focus is now on trying to get new contracts done with restricted free agent forwards Ross Colton, Alex Barré-Boulet, Taylor Raddysh and Boris Katchouk. Colton scored the only goal in Game 5 victory against Montreal in the final that kept the Cup with Tampa Bay.