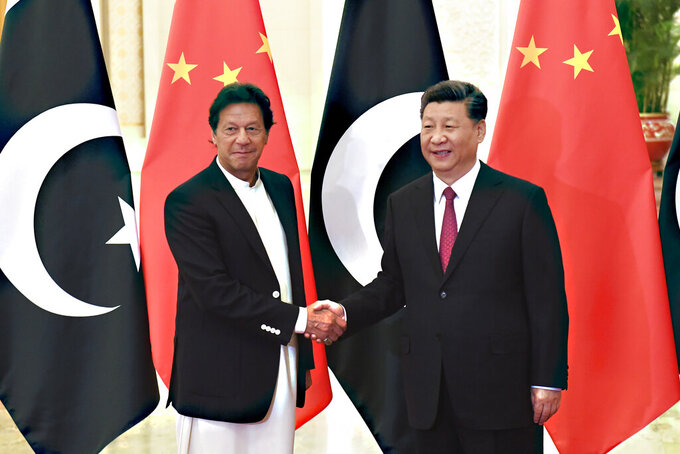 Madoka Ikegami, ASSOCIATED PRESS
FILE - In this April 28, 2019, file photo, China's President Xi Jinping, right, shakes hands with Pakistan's Prime Minister Imran Khan before a meeting at the Great Hall of the People in Beijing. Pakistan and China are urging the international community to send humanitarian help to Afghanistan, where people are facing shortages of food and medicine in the shadow of winter. A government statement said Pakistani Prime Minister Imran Khan and Chinese President Xi Jinping discussed the situation in Afghanistan by phone(Madoka Ikegami/Pool Photo via AP, File)

ISLAMABAD (AP) — In a rare joint appeal, the leaders of Pakistan and China on Tuesday urged the international community to swiftly send humanitarian and economic aid to Afghanistan, where people are facing food and medicine shortages in the shadow of winter.

The latest development came a day after Chinese Foreign Minister Wang Yi met with the Taliban representatives in Qatar to discuss a range of issues.

Pakistan and China are a longtime allies and along with other countries, they've sent humanitarian aid to Kabul over the past two months.

Pakistan wants the world community to unfreeze Afghanistan’s assets to enable Kabul use its own money to avert the deepening crisis.

Currently, the Taliban government does not have access to the Afghanistan central bank’s $9 billion in reserves, most of which is held by the New York Federal Reserve.