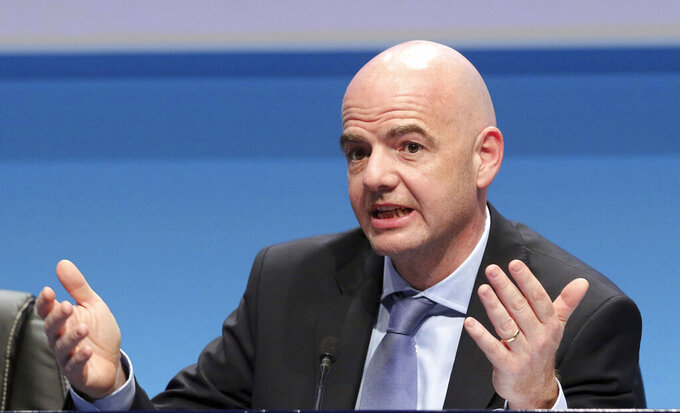 Ronald Zak, ASSOCIATED PRESS
FILE - UEFA Secretary General Gianni Infantino speaks during a news conference at the end of the 39th Ordinary UEFA Congress in Vienna, Austria, on March 24, 2015. The last 32-team World Cup will be the shortest in this era. There are just 28 days from starting on Nov. 21 in Qatar to finishing on Dec. 18. And only 25 days to play seven games if a team from Groups G or H – like Brazil or Portugal – is to reach the final after opening on Nov. 24. (AP Photo/Ronald Zak, File)

GENEVA (AP) — There has never been a World Cup match schedule like this one.

The first World Cup ever played in November and December — to avoid Qatar's desert heat — is just the starting point for other unique features.

For players and fans in Qatar, and viewers worldwide, the games come around early and often on a more intense schedule than any previous group stage. Four separate kickoff time slots are needed to make this tournament work, though they were used on the first Saturday of previous tournaments.

That’s three total days fewer than were used to play the 2018 tournament in Russia and the 2014 edition in Brazil.

A 32-day tournament using five full weekends wasn't available this time because of the deal FIFA had to strike with European leagues and clubs in 2015 to drop the World Cup into the middle of their domestic season.

The European Leagues group had warned of “very severe damage” being done to its members’ sporting and financial interests by shutting them down for at least six weeks.

While storied clubs and stars like Erling Haaland take an extended break or head to training camps, World Cup players have an intense time ahead.

Teams in Groups G and H, like Brazil and Portugal, have the fewest possible rest days. To win the title, they will have to play seven games in only 25 days. The World Cup doesn't even pause between the group stage and the round of 16.

“This will be a very tiring tournament, and it’s true we start later,” Portugal coach Fernando Santos said after the draw on April 1.

“The only advantage I see is starting on the 24th,” he said, noting that teams which play on Nov. 21 — England, Netherlands, United States — have fewer days to prepare.

Santos, who wants those extra pre-tournament days for practice, pointed to the dilemma facing most of the 32 coaches at a World Cup where typically 75% of selected players are employed by European clubs.

European domestic leagues were mostly playing games right up to Sunday on the last day before players had been mandated by FIFA to be with their national teams.

That leaves only one week of official preparation time instead of at least two weeks before a normal World Cup.

In the Premier League on Sunday, Ecuador players Moisés Caicedo and Pervis Estupiñán were on the field for Brighton exactly one week before their national team opens the World Cup against Qatar.

When the clock in Doha ticked past midnight into Monday — FIFA's Nov. 14 deadline for players to be on national-team duty — squad members from Argentina, Brazil, France, Poland and Serbia were still on the field in Italy, where the Juventus-Lazio game finished close to 11 p.m. local time.

“We don’t have time to prepare the team, just seven days,” Croatia coach Zlatko Dalić said in April. “It will not be easy for us.”

There was no perfect solution when FIFA confirmed the inevitable switch of dates in 2015, accepting the World Cup could not be played or organized in June, when temperatures in Qatar reach 45 degrees Celsius (113 degrees Fahrenheit).

Seven years ago, the favored European option of a January 2022 tournament was dismissed by FIFA’s then-leaders because of a direct clash with the Winter Olympics in Beijing.

“It is, of course, not an ideal situation to play in November and December,” then-UEFA general secretary Gianni Infantino (now FIFA president) said in March 2015, “and we would have preferred to play in January because it would have had less of an impact.”

Still, the agreement to play in November and December did create a five-month delay that proved essential when the COVID-19 pandemic wreaked havoc with international soccer. Nearly all World Cup qualifying games scheduled in 2020 were postponed.

When it came to finalizing World Cup dates, one red line was ensuring the Premier League would have its traditional Dec. 26 games.

The happy solution for Qatar was staging a four-week tournament with a traditional and auspicious Sunday final — the emirate’s National Day on Dec. 18.