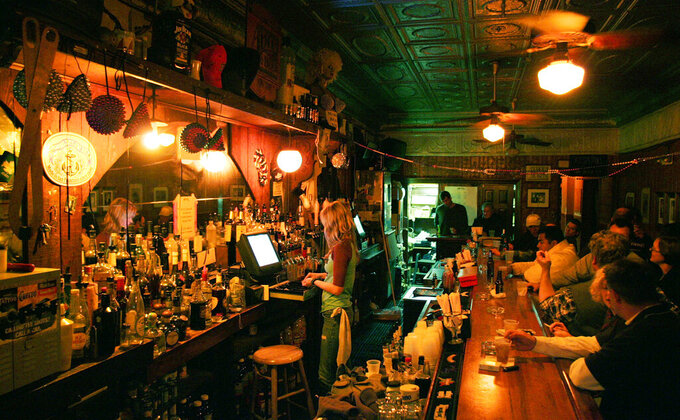 ALEX BRANDON, ASSOCIATED PRESS
FILE - The Maple Leaf Bar in New Orleans is shown in this Feb. 13, 2006, file photo. Three New Orleans music venues are going to require proof of coronavirus vaccination or a negative test to get in the club. The clubs _ Tipitina's, the Maple Leaf Bar and d.b.a. _ made the announcement late Wednesday, July 28, 2021, in a news release. The new rule will go into effect for performances at the venues this Friday. (AP Photo/Alex Brandon, File)

NEW ORLEANS (AP) — Increasingly urgent efforts to persuade, entice or cajole people to get vaccinated against COVID-19 are taking a variety of forms in Louisiana, where new cases and hospitalizations continued a steep climb on Thursday.

Three heralded music venues in the city said they won't let people into performances starting Friday without proof of vaccination or a negative coronavirus test. A judge in Baton Rouge said he'll reduce community service hours required of people who are sentenced to probation if they are willing to get vaccinated. And a hospital north of New Orleans, North Oaks Health System in Hammond, reported this week that a recent donor-funded program is providing $100 each to 500 people who get vaccinated.

Gov. John Bel Edwards posted a lighthearted public service announcement Thursday with aspiring basketball star and Scripps National Spelling Bee champion Zalia Avante-Garde of Louisiana to encourage vaccinations. The chief medical officer of Our Lady of the Lake Medical Center in Baton Rouge struck a more serious tone in a social media video, noting that hospital admissions there have grown from 35 two weeks ago to 140 Thursday, including 11 children.

“When you look around the hospital, the fear and the knowledge that this is the worst time is written on all of our team's faces,” said Dr. Catherine O'Neal.

In New Orleans, officials with the 40-hospital Ochsner Health system scheduled a Friday news conference “to discuss fact versus fiction about the COVID-19 vaccine and pregnancy, nursing and fertility.” Ochsner officials say persistent misinformation about the vaccine's effect on fertility is part of the reason some system employees have declined to be vaccinated.

The state health department reported 4,413 new COVID-19 cases on Thursday, and 20 new deaths. The daily hospitalization number was 1,620, nearly 100 more than a day earlier. It had been consistently under 300 through much of May and all of June.

“Getting vaccinated is a service to the community,” state Judge Fred Crifasi of Baton Rouge told The Associated Press in an email about his willingness to let a vaccination count toward an offender's community service requirement, with credits varying by individual circumstances.

“We are currently in a serious predicament in Louisiana. So, if a probation candidate is inclined to get vaccinated, I will grant credit for that effort towards any requirement of community service," he said, adding any offender was free to take the offer or not.

About 41% of the state's population has received at least one vaccine dose, based on figures the health department posted Thursday. Vaccinations have been increasing but the rate remains low.

New Orleans vaccination rates are higher than in other parts of the state, but that has not stopped three well known music clubs from providing another incentive for getting the shots.

Tipitina’s, the Maple Leaf Bar and d.b.a. announced Wednesday that beginning Friday, anyone wanting to attend performances will need proof of vaccination or a negative coronavirus test.

Guests will have to show their proof of vaccination along with an identification. Negative tests must be within the 72 hours before the performance.

Music venues were especially hard hit during the pandemic when live indoor performances were banned as a way to prevent the spread of the virus. Many venues and performers pivoted to performances that were shown on the internet and took donations as a way to recoup some lost income. It wasn’t until March that indoor music was allowed to resume and even then it was under limited conditions although those have since been lifted.