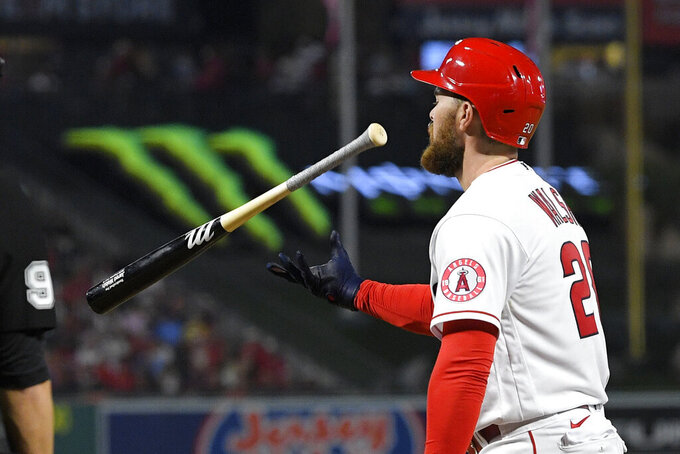 With Trout coming up as the potential tying run in the eighth inning Friday night, he wasn't about to make another mistake.

On a night when Trout had already homered and drove in two runs, Servais intentionally walked the three-time AL MVP with one out and a 1-0 count in the eighth. Trout was left stranded when Andres Muñoz struck out Shohei Ohtani and Jared Walsh, and the Mariners held on for a 4-3 victory.

“That would have been a bad decision. We've learned a little bit,” said Servais about the late-game decision. “Andres did a nice job working around the edges, and then when we fell behind in the count, put him on base and make the other two guys try to get us.”

Julio Rodríguez homered and scored twice, Eugenio Suárez had three hits and an RBI, and Seattle won its fourth straight.

Jesse Winker also had three hits while Chris Flexen (3-8) went five-plus innings to record his first victory since May 27.

Trout had a solo shot in the fourth inning — his sixth homer against the Mariners this season — and an RBI triple in the sixth. But for the most part Servais was happy with the way they limited the damage that Trout could do.

“He homered but there was no one on base which was huge," Servais said.

Rodriguez lined a curveball from Oliver Ortega just inside the foul pole in left field with one out in the fourth for a solo shot to extend Seattle’s lead to 3-0. He scored the Mariners' first run on a single by Suarez off Michael Lorenzen (6-5) in the first.

Suarez had two doubles and gave Seattle a 4-1 advantage in the sixth when he came home on Taylor Trammell's hit.

Paul Sewald retired the Angels in order in the ninth for his sixth save in eight opportunities.

Trout factored in all the Angels' runs. His fourth-inning homer to bring the Angels within 3-1 was his 22nd this season, which is tied for second in the majors. It was also the 53rd of his career against Seattle, which moved him past Rafael Palmeiro for most against the Mariners.

Trout added an RBI triple in the sixth inning when rookie center fielder Rodriguez misread the liner and had it go over his head before it rolled to the wall. Trout scored on Ohtani’s grounder to pull the Angels within a run.

“I don't know if there is a center fielder that makes that play. How do you defend it? It took another gear and a left turn there,” Angels manager Phil Nevin said.

Flexen allowed three runs on five hits with three strikeouts and two walks. It was the first time in 13 games a Seattle starter has allowed more than two runs.

Lorenzen labored for three innings. The right-hander gave up two runs on four hits and also walked four. He had five strikeouts but faced 18 batters. It is the first time in nine years a Halos' starter has thrown at least 85 pitches in the first three innings.

Trout has 100 career extra-base hits against Seattle (36 doubles, 11 triples, 53 home runs), which is the most against the Mariners. Palmeiro and Trout were tied with 98 going into Friday.

Trout drew his 112th career intentional walk in the eighth inning, which ties him with Vladimir Guerrero for the most in franchise history.

The Mariners didn't go down in order all night and left 16 runners on base. The last time they stranded that many was Sept. 18, 2012, against Baltimore.

Seattle, which was 3 for 15 with runners in scoring position, left the bases loaded in the third and eighth innings.

A BIT OF REVENGE

Justin Upton, who was released in spring training after four-plus seasons with the Angels, had an RBI single in the third inning to extend Seattle's lead to 2-0.

Mariners: 1B Ty France underwent an MRI on his left arm. He was out of the lineup after being involved in a collision during Thursday's game at Oakland. France was taking the throw at the bag when he collided with Oakland’s Sheldon Neuse.

The Angels designated OF Juan Lagares for assignment and called up OF Monte Harrison. Lagares re-signed with the Angels on May 8 but was batting .183 in 20 games.