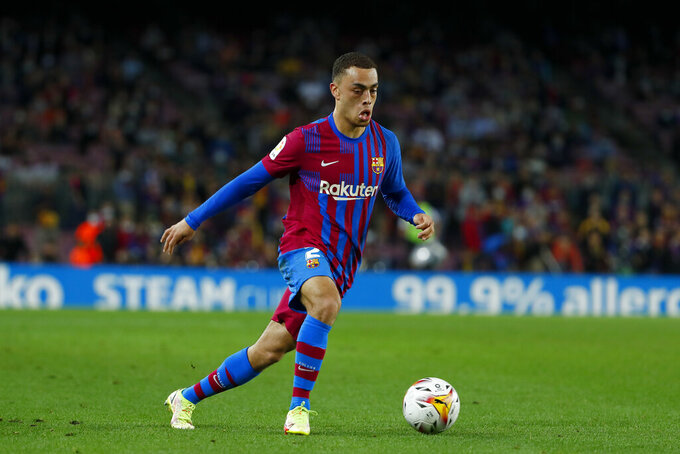 CHICAGO (AP) — Christian Pulisic is back but not fully fit, Sergiño Dest is out and Joe Scally was called up for a possible debut.

As World Cup qualifying nears the halfway point, the U.S. will have a close to a full-strength roster available against Mexico on Nov. 12 at Cincinnati and at Jamaica four days later.

“It’s always a combination of what they’ve done in the past for us and what they’ve been doing with their teams,” U.S. coach Gregg Berhalter said Thursday. “It’s not an exact science.”

The U.S. has 11 points, three behind Mexico, after six of 14 games. The top three of eight teams qualifies from North and Central America and the Caribbean, and No. 4 advances to a playoff.

Berhalter has used 33 players — five more than in the 10 matches of the 2018 hexagonal — giving starts to 29. Unlike the September and October windows that had three matches in seven days, there are two games in five days.

“It should be reasonable that if we’re happy with the performance of players in the first game, that they can continue on and play the second game,” Berhalter said.

Pulisic injured his left ankle during the 4-1 win at Honduras on Sept. 8 and returned only Tuesday for the final 17 minutes of Chelsea’s Champions League match at Malmö.

“It’s luxury to be able to bring a guy like Christian into camp,” Berhalter said. “Even knowing he’s not 90 minutes fit, to have him be able to make an impact in whichever we chose is going to be helpful.”

Reyna remains sidelined by a right hamstring injury sustained Sept. 2 at El Salvador, and forward Gyasi Zardes is out after spraining his left knee with Columbus against Nashville on Oct. 20.

Scally, an 18-year-old defender from Lake Grove, New York, has started all 10 Bundesliga matches this season for Borussia Mönchengladbach. He was the lone first-time callup on the 25-man roster.

Scally played in five Bundesliga games since he was overlooked last month, including a 5-0 win over Bayern Munich. Berhalter praised Scally’s play against Leroy Sané and Alphonso Davies.

“He’s being tested and he standed up to those tests,” Berhalter said. “We wanted to see him before consistently at a high level, and he’s done that.”

Usually reticent to announce lineup selections in advance, Berhalter envisioned forward Ricardo Pepi “will play a large portion of these two games” and said midfielder Gianluca Busio “will definitely be pushing for a starting position” after gaining a regular role at Venezia following a transfer from Kansas City.

“He’s handled it better than just about anyone I’ve seen,” Berhalter said.

Brooks was bypassed but Berhalter expects to pick him at some point.

“A lot of it was based on how we felt his performance was with the team the last time,” Berhalter said. “He’s working his way back into form.”

Defenders George Bello and Shaq Moore were dropped, along with midfielder Luca de La Torre and forward Matthew Hoppe. Ream had dropped out of October camp for family reasons.

Forwards Daryl Dike and Jordan Pefok were bypassed in favor of Jesús Ferreira, a 20-year-old Dallas forward selected for the first time since scoring his first two international goals in January exhibition against Trinidad and Tobago.

“I think he will have a role to play with the national team in the future, but it’s just not exactly what we needed to be right now,” Berhalter said of Dike. The coach described Pefok as a “stationary type” of forward and said the two matches required more running,

Midfielder Yunus Musah was picked despite playing just 47 minutes in two substitute appearances with Valencia since the last international break.

Looking back at his rotation in last month’s 1-0 loss at Panama, Berhalter admitted “maybe we made wrong lineup choices based on the form of guys.”