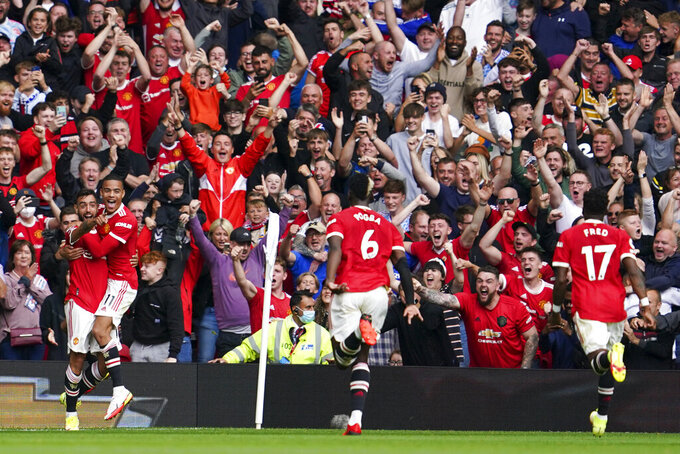 The return of near-capacity crowds fueled a barrage of goals and a bunch of home wins on the first Saturday of the English Premier League season.

More than 72,000 spectators — Britain’s biggest soccer crowd since the pandemic — saw Bruno Fernandes’ hat trick and Paul Pogba’s four assists sweep Manchester United to a 5-1 thrashing of fierce rival Leeds, a statement of intent from a team whose last of its record 20 top-flight titles came in 2013.

It was the highest-scoring encounter on a day featuring 25 goals across seven matches, at an average of 3.57 — much higher than a typical season’s average. The presence of fans may also have contributed to there being five home wins, an immediate swing from last season when there were more away wins (40% compared to 38% for home teams).

Chelsea, the European champion and a big title contender like United, flexed its early-season muscles by overwhelming Crystal Palace in a 3-0 win that could have been heavier in front of nearly 39,000 fans.

Liverpool was the other expected title challenger to begin its league campaign and Mohamed Salah set up two goals before scoring himself — the fifth straight season he has netted in the opening round — in a 3-0 win at promoted Norwich.

There were also wins for promoted team Watford and Everton, who beat Aston Villa 3-2 and Southampton 3-1 respectively, and Leicester, which defeated Wolverhampton 1-0 thanks to a goal by 34-year-old striker Jamie Vardy.

Aside from Liverpool, the only away winner was Brighton, which came from behind to beat Burnley 2-1 at Turf Moor.

The British government lifted social-distancing measures on July 19, paving the way for clubs to allow fans back in force after they were shut down for almost the entirety of last season and the end of the 2019-20 season. Capacities aren’t quite at their maximum, though, because certain areas of stadiums have limited access around players and officials.

Manchester City, the reigning champion, begins the defense of its title at Tottenham on Sunday.

On a day when Jadon Sancho made his debut for Man United off the bench and Raphael Varane was presented as the club’s second big signing, a packed crowd at Old Trafford was treated to a midfield clinic by United’s two most high-profile players.

Pogba has again been linked with a move away from United during the offseason but he was laughing and joking around after the final whistle after collecting more assists in one game than he managed in the entire 2020-21 campaign. Fernandes was the beneficiary with his first hat trick in English soccer — and none of the goals coming from the penalty spot this time.

Fernandes ran onto Pogba's clipped pass for United’s 30th-minute opener and, after Luke Ayling equalized for Leeds with a long-range strike in the 49th, Pogba played in Mason Greenwood for an angled shot that regained the lead for Ole Gunnar Solskjaer’s side.

Fernandes ran onto another through ball from Pogba before cutting inside and driving in a low effort that just went over the line before being cleared away by Ayling.

Fernandes completed his hat trick by running onto a long pass by Victor Lindelof and rifling a shot high into the net, before Pogba made it four assists for the match by providing the cross that Fred swept home in the 68th.

Chelsea is looking to follow up winning the Champions League title with capturing another Premier League trophy and the team didn't need new signing Romelu Lukaku to overpower Palace.

Defenders Marcos Alonso and Trevoh Chalobah — with his first goal for Chelsea, on his Premier League debut — scored either side of a close-range strike by U.S. forward Christian Pulisic in a dominant display by Thomas Tuchel’s team.

The victory came three days after Chelsea won the UEFA Super Cup by beating Villarreal in a penalty shootout.

It was a sobering result for Palace's newly hired manager, former Arsenal midfielder Patrick Vieira, who was taking charge of a competitive game for the first time in English soccer.

Mohamed Salah just loves the first round of a Premier League season.

The Egypt forward set up two goals and scored himself for a fifth straight year in the opening round of a season, the first player to do so.

Diogo Jota and the player who replaced him in the 61st minute, Roberto Firmino, scored from passes from Salah before the latter curled a shot high into the net for a record-breaking strike.