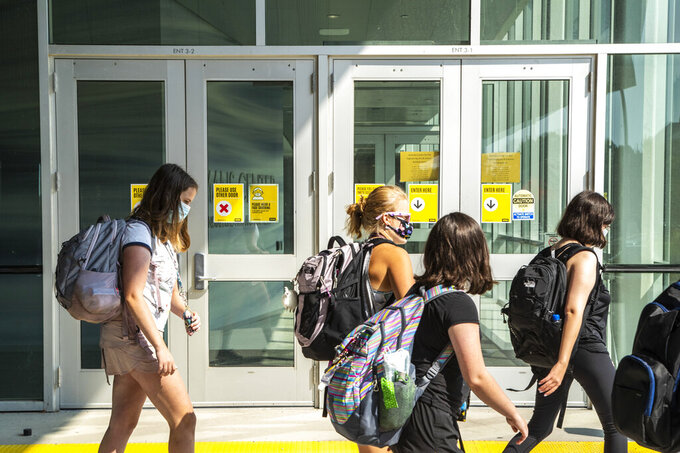 Joseph Cress, ASSOCIATED PRESS
FILE - In this Monday, Aug. 24, 2020, file photo, students wearing face masks walk past doors marked with COVID-19 related warnings at the Seamans Center during the first day of in-person classes for the fall semester amid the novel coronavirus pandemic, on the University of Iowa campus in Iowa City, Iowa. More than 18 months after Iowa’s first coronavirus case, the state finds itself in a protracted argument over the value of wearing masks, especially in schools. (Joseph Cress/Iowa City Press-Citizen via AP, File)

DES MOINES, Iowa (AP) — More than 18 months after Iowa's first coronavirus case, the state finds itself in a protracted argument over the value of wearing masks, especially in schools where children are increasingly becoming infected with the virus.

As the COVID-19 death toll in Iowa tops 6,400 people, discussions in the state have shifted away from vaccination efforts and more toward masks following a federal judge's ruling that temporarily blocked a state law banning mask mandates in schools.

In the courts, the state attorney general's office has been seeking to have the mask mandate ban restored and enforced in school districts across the state. School boards have been holding often-heated meetings about whether to require masks.

The efforts to question the value of masks in Iowa and elsewhere have left some public health officials frustrated about a situation they blame on politics.

“I’ve never seen a public health response that has been as politicized as this one and I think that politicization is responsible for the loss of thousands of lives,” said Dr. Richard Besser, president and CEO of the Robert Wood Johnson Foundation and a former acting director of the Centers for Disease Control and Prevention. “Because when one’s willingness to follow public health advice is linked to politics rather than science, we’re in a really difficult situation and that’s where we are.”

Iowa Gov. Kim Reynolds has long opposed mask mandates, especially in schools, and she recently stepped up her questioning of masks' effectiveness.

Asked at a Sept. 2 news conference about her opposition to allowing schools to require masks, the Republican governor asserted, “There’s data on both sides that support masks and the negative effects of masks.” And speaking to reporters in August after the CDC recommended masks for indoor public spaces, she said, “Where’s the data that the CDC is using to justify the mask mandate?”

The CDC offers details on the science supporting mask use. It refers to at least 10 studies that have confirmed the benefit of universal masking in community level analyses and indicates research supports that mask wearing has no significant adverse health effects for wearers.

Reynolds said her public health department is “treating this just like the flu” when it comes to reporting and tracking school outbreaks.

Iowa is among at least eight Republican-led states that have limited the ability of school boards to impose mask mandates. Iowa Republicans passed such a law in May and Reynolds quickly signed it at a ceremony attended by activists holding signs proclaiming that masks hurt children.

More recently, arguments about masks heated up after federal Judge Robert Pratt blocked enforcement of the mask mandate ban, leading at least 17 school boards to require masks in their schools.

At a Sioux City school board meeting last week, Vice Chairwoman Monique Scarlett said it’s been proven that wearing masks reduces virus spread and something is better than nothing. She also referred to communication she's received from residents, saying “Some emails from my community were alarming and opened my eyes to what community I am actually existing in unfortunately.”

Her motion to initiate a mask requirement died for lack of a second.

Johnston School Board member Steve Hopper said at a Sept. 13 meeting that passing a mask mandate would escalate the issue, pitting school principals against anti-mask parents.

“I think many of you are being bullies,” he said, adding that the situation “has become so politicized that we’re in a lose-lose situation because we’re going to get sued either way.”

The board initially opted not to take action but on Tuesday afternoon voted to require masks for all students.

Shana Kushner Gadarian, a political science professor at Syracuse University, has been studying the national response to COVID-19 and through surveys found a partisan gap over issues like mask use early on in the pandemic. She said people in Republican areas already didn't trust the federal government and quickly voiced skepticism over what government officials were saying about COVID-19.

Some governors then picked up on the perceptions of the Republican base and promoted the idea that each individual should decide whether to go out in public, wear a mask or get vaccinated.

Language that centers on individualism and freedom typically resonates more with Republicans, Kushner Gadarian said, and is being applied to public health issues.