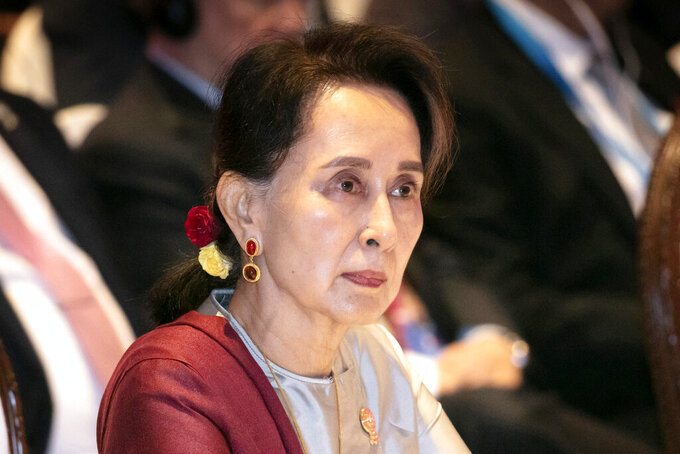 BANGKOK (AP) — A court in Myanmar ruled Tuesday that a corruption trial for ousted leader Aung San Suu Kyi and three political colleagues will continue after finding that prosecutors presented sufficient evidence for their indictment.

Suu Kyi, who was forced from office when the military seized power from her elected government last year, has been charged with 11 counts under the Anti-Corruption Act, with each count punishable by up to 15 years in prison and a fine.

The corruption cases are among a large number of charges under which the military is prosecuting her. If found guilty of all the charges, she could be sentenced to more than 100 years in prison.

Suu Kyi’s supporters and independent analysts say the charges are politically motivated and an attempt to discredit her and legitimize the military’s seizure of power while keeping her from returning to politics. The army’s takeover was met with widespread non-violent protests. After the peaceful demonstrations were quashed by lethal force, they turned to armed resistance in many areas.

A legal official who is familiar with Suu Kyi’s cases said she and her co-defendants were formally indicted Tuesday on four corruption counts on charges of allegedly building a residence with money from charitable donations and granting permits to rent land at lower-than-market prices for a foundation named after her mother.

The court will now hear the defense arguments, including cross-examination of the prosecution's witnesses.

According to Myanmar law, a judge can order an end to a trial after the prosecution has presented its case if it doesn't have merit. This first phase is roughly similar to a grand jury process in Anglo-American law. If the judge finds the prosecution case credible, the trial continues into a second phase in which the defense presents its case and a verdict is delivered.

Suu Kyi has already been sentenced to 11 years’ imprisonment after being convicted on charges of illegally importing and possessing walkie-talkies, violating coronavirus restrictions, sedition and another corruption charge.

All of Suu Kyi's trials in the capital, Naypyitaw, are closed to the media and the public, the prosecutors do not comment on them and the state-controlled media have not reported directly on the proceedings. Suu Kyi’s lawyers have been barred since last year from providing details of the trials under a gag order.

The court’s decision on Tuesday was confirmed by a legal official who spoke on condition of anonymity because he was not authorized to release information.

In the cases under consideration Tuesday, the state Anti-Corruption Commission has declared that several of Suu Kyi's alleged actions deprived the state of revenue it would otherwise have earned.

The seven other cases currently being tried under the Anti-Corruption Act include several related to the purchase and rental of a helicopter by another of Suu Kyi’s former Cabinet ministers. Suu Kyi is also charged with two counts of bribery that allege she took $550,000 from a construction magnate.