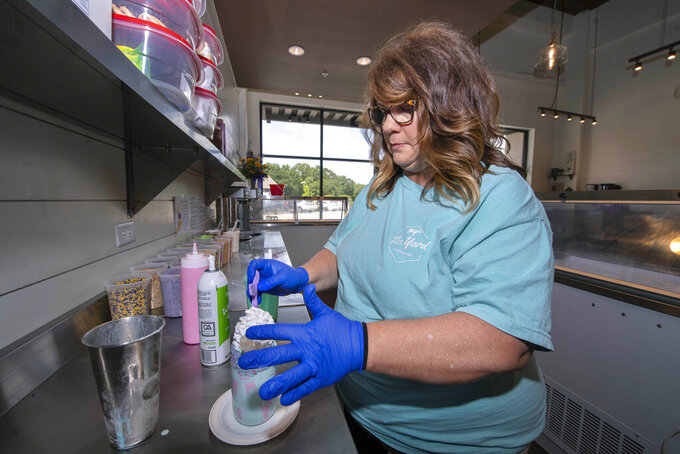 Travis Spradling, ASSOCIATED PRESS
Yard Milkshake Bar Business co-owner Tracy Couvillion works on a gourmet milkshakes that will become 'The Mermaid,' at The Yard Milkshake Bar, Tuesday, July 13, 2021 in Baton Rouge, La. To say The Yard Milkshake Bar serves over-the-top confections is a bit of an understatement. This is the description for its Tiger Deaux milkshake unique to Baton Rouge: a concoction of cookie dough ice cream with purple and gold marshmallow cream served in a vanilla iced jar rolled in purple and gold sprinkles and topped with purple and gold whipped cream, a scoop of chocolate chip cookie dough, more sprinkles and a purple tiger paw.(Travis Spradling/The Advocate via AP) 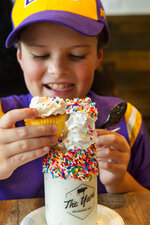 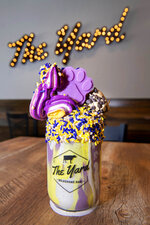 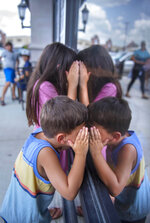 BATON ROUGE, La. (AP) — To say The Yard Milkshake Bar serves over-the-top confections is a bit of an understatement.

Depictions of its customer favorites Cookie Monster and Strawberries and Cream Cheesecake also run on and on. But then that’s true for just about all of the gourmet milkshakes and sundaes, ice cream flavors, floats and specialty bowls. And there’s a “secret menu” with more out-of-this world flavor combinations.

Everything is so over the top, you can’t even see the top from here.

People have been lining up out the door — even in the rain — to get a taste ever since Marc and Tracy Couvillion opened The Yard on July 9 in Highland Park Marketplace, 18303 Perkins Road.

The Couvillions’ shop is the first Louisiana location of the The Yard franchise, which was started in Gulf Shores, Alabama, in 2017 by Logan and Chelsea Green. You might recall seeing them on ABC’s “Shark Tank.” There are now locations in 10 states.

The Couvillions visited the Alabama shop in 2019.

“They had a waiting time of probably over an hour just to get in,” Marc Couvillion said. “And it was worth it.”

They were so impressed, they started thinking about opening a franchise in Baton Rouge.

“We just kicked the idea around for a year or two, then we went back to Gulf Shores in 2020 during COVID,” Marc Couvillion said. “There was still a line outside the door.”

The couple was sold, and now the Couvillions and their 35 employees are serving up a long menu of gourmet milkshakes, which are almost as fun to watch being made as they are to eat.

Take the popular Cookie Monster: Into the tall Mason jar (which you can keep) goes a drizzle of blue and chocolate marshmallow sauce. Then chocolate icing goes around the neck of the jar, which is dipped in cookie crisp pieces. Meanwhile, blue cookie monster ice cream is mixed with milk in a blender, then poured into the jar and topped by whipped cream, chocolate and blue marshmallow cream drizzle, cookie crisp pieces and a cookie dough sandwich.

You will definitely need both a straw and spoon to tackle this towering dessert, just as you will for the Strawberries & Cream Cheesecake milkshake, which comes in a vanilla iced jar dipped in graham cracker crumbs filled with a shake made of strawberry cheesecake ice cream, then topped by whipped cream, strawberry topping, crushed graham crackers and a slice of cheesecake.

“We’re offering a Mardi Gras shake right now,” Tracy Couvillion said. “When we announced that we were opening, they already had a shake called the Yardi Gras. So, that’s how we announced the Louisiana opening.”

The Yardi Gras shake will be available until the end of July and brought back next year during Mardi Gras season. The shake is made with cinnamon ice cream with purple, green and gold marshmallow drizzle and sprinkles. It’s topped with whipped cream and a piece of king cake.

Milkshake not your thing? No worries. The Yard’s menu of specialty ice cream bowls have the same themes as the milkshakes or you can order a regular shake in any flavor.

“We’ll also be offering specials every month,” Tracy Couvillion said. “If there’s a holiday that month, it may be a shake that will lean toward the holiday, or if it’s summer or spring, those shakes will reflect the season.”

The Couvillions chose their Highland Marketplace location because of its customer traffic.

And though the line has been extending past the front door each day, customers haven’t had to wait more than 30 minutes to get their order.

“Obviously, a lot of people vacationing in Orange Beach and Gulf Shores, and they’ve learned about The Yard,” Tracy Couvillion said. “The Yard was definitely known by the time we got the ball rolling, and it’s great to see people lining up.”