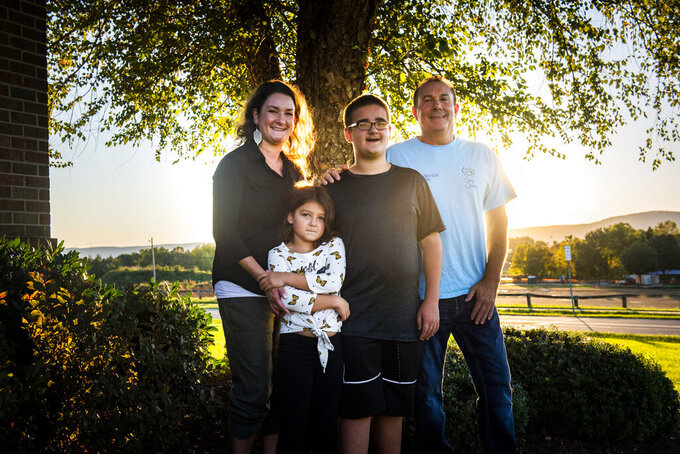 Katina Zentz, ASSOCIATED PRESS
Kim Camelotto, left, and her children Sofia Camelotto and Anthony Camelotto, stand with Camp Jamie Volunteer Mike Folio in Middletown, Md., on Wednesday, Sept. 29, 2021,. Camp Jamie is a camp hosted each year by Frederick Health Hospice for children who are grieving the death of a loved one. Folio shadowed Anthony at Camp Jamie and guided him throughout the experience. (Katina Zentz/The Frederick News-Post via AP)

FREDERICK, Md. (AP) — Last year, during the first week of March, Kim Camelotto’s son, Anthony, joined a fifth-grade class at North Frederick Elementary School. It was his second time at a new school in less than a year.

Ten months earlier, his dad had died suddenly at their home in Pasadena. As his mom administered CPR, the 8-year-old stayed on the phone with a 911 operator, helping her count chest compressions. When the paramedics knocked on their door later that night, he was the one who answered.

Still, after he joined his little sister, Sofia, at North Frederick, he seemed to be adjusting well, Camelotto said. She had recently started teaching special education there, and he liked being able to watch her walk by the cafeteria during his lunch breaks. She had also just bought a house in Middletown, the town where she grew up. Her parents lived just six minutes away.

“It was starting to feel like, ‘Oh, we’ve got this figured out,’” she said. “We’re in a good school, we’ve got our own house. Let’s see how this works.”

The next week, all schools in the state shut down to quell the spread of a new, unfamiliar virus that was just starting to seep into Maryland communities. It felt like the latest blow in a laundry list of traumatic experiences her kids had already faced, Camelotto remembered. At the time, she was also in a dark stage of her own grief, she said, where she couldn’t really think or do anything to help her children heal.

About one year later, following the advice of a therapist, she filled out an application for Anthony and Sofia to attend a day camp organized by Frederick Health Hospice for children who are grieving. She got it in a day before it was due, and her kids participated in Camp Jamie’s June session.

“They came in and swooped us up and healed our little family, when everything else, was just, you felt like it was like,” Camelotto took a breath, “dodgeball.”

For 30 years, Camp Jamie — named for Frederick Health Hospice’s first child patient — has provided a community for kids grappling with the death of a loved one. Guided by their adult “big buddies,” participants learn tools to understand and express their grief while bonding with other children who have had similar experiences.

In a typical year, the camp, which is free to all who attend, is hosted in two sessions: a weekend stay at Skycroft Conference Center in the summertime and a day camp in the fall. During the pandemic, though, Frederick Health Hospice changed course, cancelling its usual summer camp last year and holding more targeted family grief workshops in the fall. It also decided to hold family workshops this fall instead of its planned day camp on Sept. 25.

Camp Jamie was back on over the summer, though, taking place between June 5 and 6 with some modifications. Kids didn’t spend the night, for instance, and instead of taking a bus out to South Mountain, they were dropped off at Frederick Health Village. Volunteers also kept campers outdoors as much as possible and made sure they were washing and sanitizing their hands frequently. When they went inside, everyone wore a mask.

Despite the changes, Kaili Van Waveren — the traumatic grief specialist for Frederick Health Hospice and Camp Jamie’s coordinator — called the day camp a “vibrant, dynamic” experience for its participants. For some kids, coming to Camp Jamie is their first time meeting someone their age who has also lost a loved one. It’s always a powerful experience for them, Van Waveren said, but this summer’s camp was especially remarkable because some children had been out of school for a year and a half. In some ways, the bonding between campers went even deeper.

The pandemic loomed over this summer’s camp in other ways, too. A few children had lost people to the virus. Others were grieving losses to other epidemics that COVID-19 had exacerbated — 10 of the session’s 26 participants had lost people to suicide. There has also been a steady increase in children grieving overdose deaths over the years, Van Waveren said. And not having the peer support that school usually offers children made some even more isolated in their mourning.

“When someone you love dies, especially when you’re a child or an adolescent, it feels like the whole world has turned upside down. And I think that the experience of most of us in the pandemic has been that, as well — that the whole world’s turned upside down,” she said. “So, to have a loss during this time, I think, is hugely destabilizing and just really speaks to why we’re trying to be really creative in finding ways to provide grief support to our community at this time.”

Camelotto felt nervous about sending Anthony and Sofia away to camp. She especially worried about Anthony, who has sensory processing disorder and is autistic. He has a hard time being away from her, and she didn’t think he’d enjoy the traditional camping games and activities.

But the Camp Jamie volunteers assured her that he would be OK. So on June 5, she dropped him and his little sister off at Frederick Health Village.

For the first few hours of the day, she didn’t hear from any camp staffers about Anthony. OK, she figured, no news is good news. But as the day came to an end, a volunteer gave her a call, asking for guidance — Anthony was having a meltdown. He was doing better half an hour later, though, and by the time Camelotto came to pick him and his sister up, he was smiling.

The next day, Anthony announced he wasn’t going back. After some prodding from his mom, however, he returned and wound up bonding with his big buddy and even participating in some of the activities. He’s been talking about what he learned at the camp ever since, Camelotto said.

He and his sister made “memory boxes” with items that reminded them of their father and filled a jar with questions they could ask his friends and others who knew him. They decorated a walking stick, too, and made a drum that they later played in a drum circle.

They also wrote messages for their dad and burned them in a campfire.

“This one gets me emotional,” Camelotto said through tears. “And it would go up to heaven.”

Anthony used to blame his mom for what he went through. Sofia was struggling, too. She would talk about wanting to die, so she could be with her dad in heaven.

She stopped doing that after going to Camp Jamie, Camelotto said. And Anthony no longer says he has childhood trauma. Now, both kids know they can talk to their father anytime they want. Sofia writes him letters and sometimes draws him as an angel or as a butterfly. Camelotto occasionally hears her singing to him when she’s alone.

The support Frederick Health Hospice offered the Camelotto family didn’t end after Camp Jamie. Staff members connected the mother with a support group for grieving spouses, something she said has been enormously helpful. Before starting the group, she was doubtful she’d meet someone like her — a widow in her 30s with two young children. But she did.

“It’s kind of like they wanted to cushion our whole family. Nobody has known how to do that,” Camelotto said. “So, it’s been like — they’ve changed us. So much.”

It’s all for the kids

Mike Folio was 12 when his mom died of breast cancer.

The next year, his science teacher asked him if he could speak with another student who had recently lost his father. It was the first time someone had talked to him about his mother’s death at school.

“I didn’t have anyone really to talk to,” he said. “None of my friends had lost a parent. You’re kind of out on an island.”

Folio’s own experiences with grief have made his involvement with Camp Jamie all the more meaningful. This year marked his 14th volunteering with the program — he was Anthony’s big buddy during the June session.

With every iteration of the camp, Folio watches kids transform overnight. By the time they go home, he said, they understand they have a support system behind them. They know things will get better.

“When you’re around a group of kids that have something in common as far as a loss, you see you’re not alone,” he said. “Just that in itself helps with the healing, I think.”

Vicki Gates, another longtime Camp Jamie volunteer, agreed. It also helps that many of the big buddies participating in the program have their own experiences with loss, she said. When Gates was 20, she lost her big sister to a car crash. She can share that story with her little buddy to help them open up.

Often, Gates said, it feels like she gets more out of Camp Jamie than the kids do. She’s met the most incredible, resilient families and children over the years and has made lifelong friends.

Tom Delaney, another big buddy for Camp Jamie, said volunteering with the program has helped him process his own grief about the death of his father. He started working at the camp around 15 years ago, three years after his mom got involved in the program. She died in 2013.

Delaney said his father was of the belief that the past is in the past — you forget and you move on. But he’s never quite agreed with that. He thinks people should acknowledge what has happened and grow from it. He doesn’t want to forget the time he spent with his parents.

“I always feel you can’t really enjoy life if you don’t also acknowledge some of the sadder aspects of life sometimes,” Delaney said. “You need to have the give and the take, the yin and the yang. Both sides of it.”

This year, some volunteers noticed ways in which the pandemic had jolted the grieving process of their little buddies. After Folio’s little sister died, people flooded his house for three weeks, bringing food and cards. But when his brother died at the end of March of last year, only six people were allowed to come to the funeral home. Only 10 were there when he was buried next to his mom and sister.

“I’ll be honest with you,” Folio said. “I don’t know if I have completely dealt with the loss of my brother because of the way the world was. I catch myself sometimes feeling that way, and I’m an adult who’s lost a lot. So for these kids — I would say it was much more difficult for them losing a loved one in COVID.”

Volunteering at Camp Jamie this June was a different experience than it usually is for Folio because the loss of his brother was so fresh. But it gave him all the more reason to be there for the campers. He remembers how he felt after his mom died, and he doesn’t want children to have to navigate grief without guidance.

“We’re there for them. This is their weekend,” he said. “It’s not about us, it really is about the kids. That makes me happy — that all of us, together, collectively, are there for the kids.”